From sidelined to star: The return of Jennifer Trieschman

From sidelined to star: The return of Jennifer Trieschman 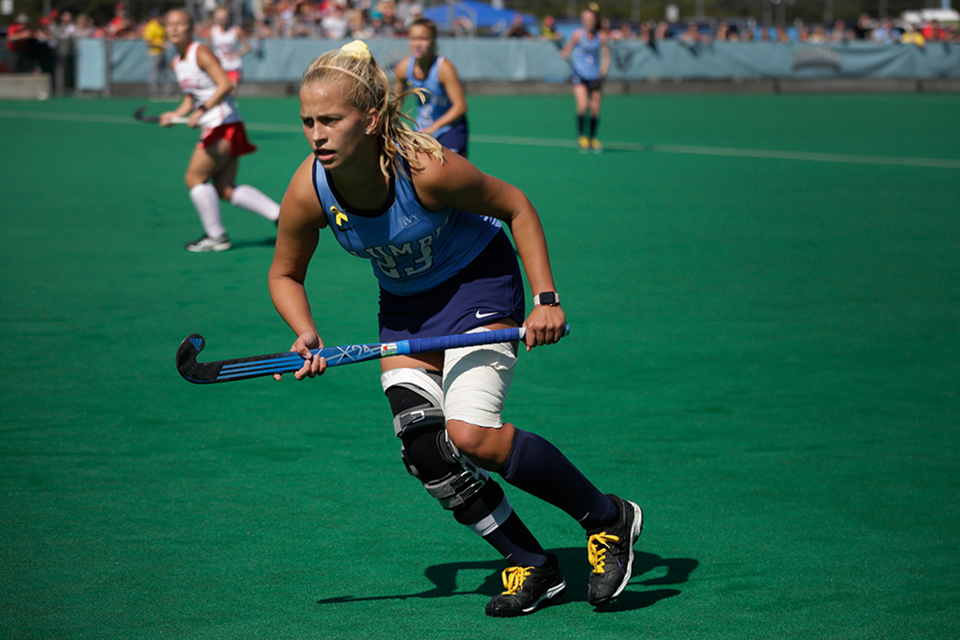 Junior Jennifer Trieschman has persevered through one of the worst things an athlete can experience—injury—and emerged successful.

The week before field hockey is set to face Brown and Bryant, the team is on the field practicing penalty corners. These plays are vital to the Lions’ success in games, so the players run them with precision.

Wearing a knee brace and jabbing her stick into a defender’s dribble, Jennifer Trieschman stands out immediately. The junior stands on the circle, leaning forward, eyes locked on the ball.

Meanwhile, the defenders are lined up on the goal line and the forwards stand at various places along the circle, with one girl crouching down at the top to stop the incoming pass. As the inserter pushes the ball from the bottom to the top, Jenn rushes to the net, fighting her way through defenders until her body is in perfect position to knock the ball past the goalie. She traps the ball in her stick, but a defender sneaks in and hits it out of the circle. Unfazed, Jenn runs back to the top, leans forward, and calls the next corner.

“If she sees the wall, she’s going to run through it,” head coach Caroline Nelson-Nichols discloses of her player’s mentality.

Jenn has always competed at a high level, from her star-studded career at St. John’s School in Houston to her time in Morningside Heights. That competitive spirit emerges in practices and games, whether that be diving into the goalie to get a touch on the ball, or fighting with multiple defenders to come up with the possession. If a teammate makes a mistake, she is the first to give them an encouraging word or pat on the back.

“I loved field hockey because you actually need everyone on the team to get the ball where you want it to go. You actually have to pass and work it around,” Trieschman answers when asked what drove her passion for the game.

Crucial to Jenn’s identity as a field hockey player is her dedication to her teammates. That has never changed.

Jenn came to Columbia ready to make an impact, and the coaching staff planned to capitalize on that fire, as Nelson-Nichols admitted that Treischman would factor heavily in the team’s game plan that season.

Beyond her field hockey prowess, Jenn brought her likeable personality to the team. Taylor Mills, CC ’17, who was a senior captain the year Jenn was a first-year, recalled that Jenn was “super energetic, super passionate about field hockey, really friendly.”

Jenn played for the first time in college during the team’s opening game against UMass Amherst. However, one bad fall suddenly changed the course of her season.

During that first game, Jenn tore her PCL.

An extremely rare ligament to hurt, a PCL tear is normally a season-ending injury. Nevertheless, Jenn was the exception to that trend, avoiding surgery and, instead, enduring months of grueling physical therapy. Though those moments were dark, Nelson-Nichols and Jenn’s teammates praised Trieschman’s optimism throughout the period.

“She was always there to help out everyone on the team and to bring a smile to everyone’s face,” Mills says of Jenn’s character after Treischman being sidelined.

Katie Ruesterholz, CC ’17, one of the most decorated Columbia field hockey players of all time and a senior captain Jenn’s freshman year, echoed the sentiment of Mills.

“She really focused on the team and not herself as an individual. Internally, I can only imagine how hard it is,” Ruesterholz noted. “Her selfless behavior was really impressive and earned her a lot of respect from the team.”

Jenn made it a point to remain a part of the team. She went to practices and paid close attention to the tactical skills the coaches were teaching. The hardest part for her of being injured?

“Not being able to contribute,” she answered.

Eager to get back on the field, Jenn approached physical therapy head-on and put in hours of extra work to get herself ready for a return.

Jenn is quick to highlight the people who helped her recover, and she credits Columbia athletic trainer Jen Spicer with her ability to return as such a dominant force.

“Jen Spicer was a huge piece of me coming back into it, seemingly seamlessly,” Jenn says. “[She] was always in the training room with me before and after practice doing rehab.”

Working together, Spicer and Jenn made the determined player’s knee strong again. However, the frustration and hardship of this process must not be underestimated.

Jenn is certainly not one to let any injury beat her. Her drive was palpable to everyone, and her grit inspired the rest of the team.

“Her work ethic really brought her back from the injury,” Nelson-Nichols comments when asked what made Jenn’s recovery so successful.

The spring of her first year, Jenn began playing again. It was the first opportunity she had to compete for a long stretch of time, and the coaches used the offseason to get her up to the speed of the college game. Jenn also focused on implementing the tactical skills she absorbed in the fall and fine-tuning her technical skills. The spring acted as a vehicle for Jenn to test out her strengthened knee and to get reacquainted with the team.

Though she returned strong, there were still obstacles left on her path to a full recovery.

“Oftentimes, the biggest challenge is the mental challenge,” Nelson-Nichols said. “It’s not necessarily that your body is still injured. It’s your mind and the way that you think about things; you still remember the injury.”

The second question surrounding Jenn’s return was her position. She entered Columbia playing center midfield, but when she was injured, sophomore Kelsey Farkas took over that role. Farkas proved skilled in that position, so Nelson-Nichols decided to move Jenn up to forward.

Come sophomore year, Jenn excelled in her new position, but it was not until October that she scored her first collegiate goal in a game against St. Joseph’s.

When remembering that moment, she smiles, lets out a breath and some laughter.

“It was awesome,” she reflects.

Tresichman still has a season and a half left in Morningside Heights, but she has already made a lasting impression on the program.

“She can know that she’s really set up success for the people behind her, and she has really set up an example,” Ruesterholz said. “I mean not only to be a good field hockey player, but also a good teammate and leader.”

Despite being one of the most legendary players in the history of Columbia field hockey, Ruesterholz was never able to win a championship, continuing Columbia’s historic drought.

For Jenn, that simple fact—that Columbia has never won a title—is more than enough to motivate her beyond where her natural work ethic already would.

Jenn mentions that Columbia field hockey has never won the championship before. She smiles slightly.

“Something to light the fire.”