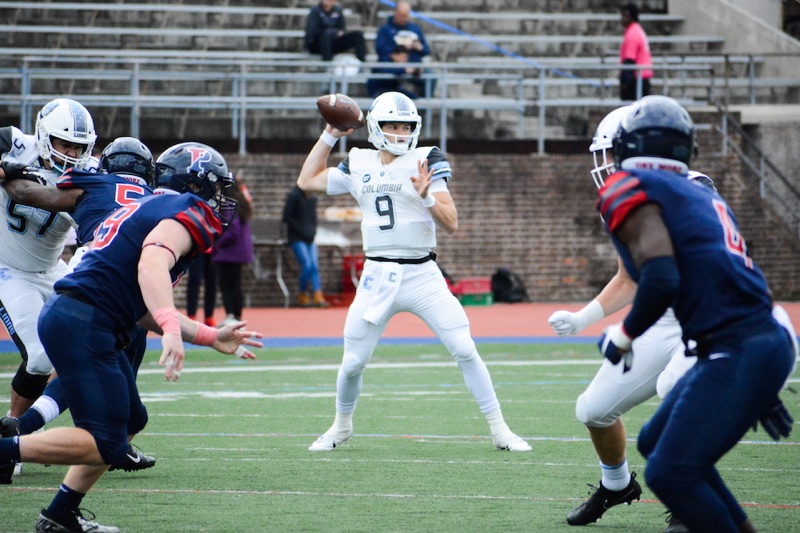 Sophomore quarterback Josh Bean went 23-of-40 for 207 yards and a touchdown pass. However, it was an interception on the final drive from Bean that doomed the Lions in a 13-10 defeat at Franklin Field on Saturday.

Down 13-10, the Lions went for it on 4th-and-1. Naturally, they utilized the most effective short-distance tool in their offensive arsenal: first-year quarterback Ty Lenhart. Lenhart got the ball out of the shotgun and immediately lunged forward and over the line of scrimmage.

For a moment, the stadium was almost silent. Neither side was certain which way the call would go. After further review, it was announced short—a turnover on downs. The Penn fan section erupted and, from a distance head coach Al Bagnoli was seen telling the nearest referee exactly what he thought of that call.

“[Lenhart] put his right foot out, clearly past the line. And then the ball got spotted behind his right foot,” Bagnoli said. “He put it where he thought it should go, and we have to live with it, but for my end, I didn’t think it was even close, to be honest.”

As the Penn offense took the field, a flag was called: unsportsmanlike conduct against the Columbia bench. It was a choppy, unpleasant, and, in a word, ugly display.

In a game dominated by penalties—the two teams totaled roughly 175 penalty yards—sloppy play, and inconsistency, this scene hardly seemed out of place. Neither team played well, as Columbia was held scoreless through the first half and Penn looked lost for most of the second. It was a low-scoring, well-fought comedy of errors.

Even in those moments that football purists might deem beautiful, things fell apart. Late in the fourth, with the Lions facing a fourth-and-18 situation on their own four-yard-line, Bean stepped back, surveyed the field, and fired a 43-yard bullet to junior wideout Kaleb Pitts, who hauled the ball in among a crowd of defensive backs.

This pseudo-Hail-Mary launched a frantic drive as the offense attempted to get within field goal range. For a wholly inconsistent day, Bean was able to play the hero in these final moments, attempting pass after pass and landing several remarkable throws as they marched down to the 24-yard line. But the effort couldn’t hold. In a pivotal moment, Bean tried to force a throw to the far side of the field.

Bagnoli noted after the fact that he wanted to give senior kicker Chris Alleyne a few more yards of wiggle room for a potential game-tying field goal on a day that was both bitingly cold and windy. Instead, the pass was intercepted.

Penn’s cornerback paraded down the sideline celebrating a play as joyful for the Quakers as it was arduous for the Light Blue.

“We made some self-inflicted mistakes, which you can’t make against a good football team,” Bagnoli said. “It really hurt us in key situations where we were gaining some momentum.”

When it came down to those deciding moments, when the Lions needed to hold firm against a potent Penn rushing attack, or thread a tight pass, they simply couldn’t finish the job.

For most of the first half, the Lions offense accomplished next to nothing. Bean finished the first half having completed only seven of 18 attempts and totalling 68 yards. Fortunately for them, the defense—despite conceding considerable yardage on the ground—remained stout in the red zone, holding the Quakers to just two field goals through two quarters.

Despite the close score, Columbia never felt truly in the race until the beginning of the second half. The Lions began their first drive in the same vein as most of their first-half performance: it was uncoordinated, cautious, and ultimately resulted in the return of the ball to Penn.

Sophomore punter Drew Schmid lined up to punt following an uninspired three-and-out. He delivered a dart to the Penn 20-yard line, but the returner bobbled it. It bounced toward and then off of the chest of a Columbia defender and ended up trapped under a dog pile of white, red, and blue. Eventually it was deemed Columbia’s ball, and the offense returned to the field rejuvenated. Bean threw two quick passes, the final being a touchdown delivered in a beautiful arc across the field to Pitts. For a moment, leading 7-6, it looked as though Columbia might pull it off.

That sentiment persisted through the third as the Lions extended their lead to 10-6 and continued to render Penn ineffective.

Things began to go wrong for the Lions in the fourth, as they received the ball early on but were unable to capitalize on the opportunity to cement their lead and put the Quakers away for good. Instead, they punted and Penn launched a drive that highlighted their true strength: their dynamic run game.

Of the 14 plays Penn ran on its penultimate fourth-quarter drive—one which ended in the game-deciding touchdown—11 were rushing plays, split between running backs Karekin Brooks and Abe Willows. Penn totalled 206 rushing yards on the day, as a Columbia defense crippled by injuries—including one to senior captain Landon Baty—failed to contain it.

Of course, the defense cannot be blamed for forcing a team that had scored over 30 points in three of its past four games to settle for just 13. A great deal of the blame rests on an offense that, nearly halfway through the season, has remained static.

The running back trio of junior Lynnard Rose, first-year Dante Miller, and first-year Ryan Young was rendered mediocre against a persistent Penn defensive line, totalling just 82 yards on 21 carries. Miller was the most effective on the ground, averaging 5.8 yards per rush, but he confusingly received just 6 carries all game.

This relative lack of output on the ground lead to the offense revolving more around Bean’s playmaking ability. Bean finished the day with 23 completions on a staggering 40 pass attempts, his most so far this season.

Junior wideout Ronald Smith III, once viewed as the Lions’ most potent offensive threat in the wake of star junior Josh Wainwright’s torn ACL, was a nonfactor today, catching only two passes for 14 yards. Bean continues to rely on his strong chemistry with junior wide receiver Kyle Castner, who finished today’s game with 47 yards on 6 catches while finding only middling success with most of his other receiving options.

As Columbia approaches their homecoming matchup against Dartmouth this upcoming Saturday, they will need to refocus their offensive game plan and find a versatility that they have lacked thus far. Otherwise, the defense’s impressive efforts—consistent despite several injuries—will continue to go to waste.

The Lions will kick off against Dartmouth next Saturday at Robert K. Kraft Field at Lawrence A. Wien Stadium at 1:30 p.m.