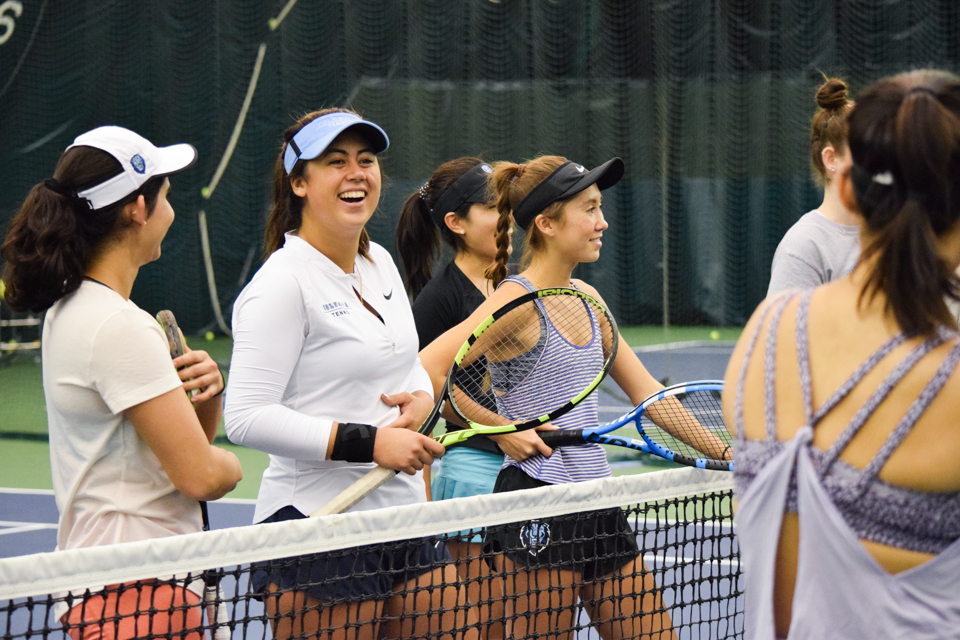 Sophomores Paulina Ferrari and Jennifer Kerr (second and third from the left) played doubles together in their hometown of San Diego before both committing to Columbia.

“For Kerr, her solid play was the result of a strong foundation based on pregame preparation—and outstanding baseline game. She discussed with coaches beforehand the animated and vocal style of play by Ferrari, whom she had never faced before.” -San Diego Tribune

Jennifer Kerr and Paulina Ferrari met for the first time on opposite sides of the court during the San Diego Section CIF championship in 2015. Neither Paulina nor Jennifer knew each other then, only that that the player standing on the opposite baseline stood in the way of a championship.

Paulina proved vocal during the match—meeting each return by Jennifer with a grunt. Her frustration was evident. She shook her head, muttering to herself in anger. In moments of success and hard points won, she was happy, yelling “yes!”

Jennifer, however, remained silent during the match, even when executing difficult shots.

As a junior in high school, Jennifer bested Paulina and claimed the CIF championship 6-1, 6-1. Jennifer brought her high school its first-ever CIF title. The next season, she would go on to win her second consecutive crown at the tournament.

According to head coach Ilene Weintraub, CC ’02, both Jennifer and Paulina were at the top of her list of recruitment for the class of 2021.

“Jennifer had very impressive results,” Weintraub said. “Everyone I spoke to about her confirmed what I had come to know: that she was very hard-working, mature, and an extremely coachable player.”

“Paulina has the doubles skills I was looking for in the recruiting process,” Weintraub added. “I always try to recruit one doubles specialist every year, and Paulina is a true student of the game, she is competitive and smart and a great teammate.”

Just after competing against each other in the CIF Finals, Jennifer and Paulina found out that they had both committed to the same school: Columbia.

“It was a mixture of surprise and excitement,” Jennifer said of the transition. “Surprise because it was coincidental that we played each other for the first time. Excitement because I now had a reason to get to know her and befriend her and would have someone from back home to go into college with.”

Together, Jennifer and Paulina finished as doubles finalists at both the USTA (United States Tennis Association) National Open Under 18 and the USTA Southern California Sectionals Tournaments, and won the USTA Under 18 Closed Regional Tournament. All three are top tournaments for junior tennis players. 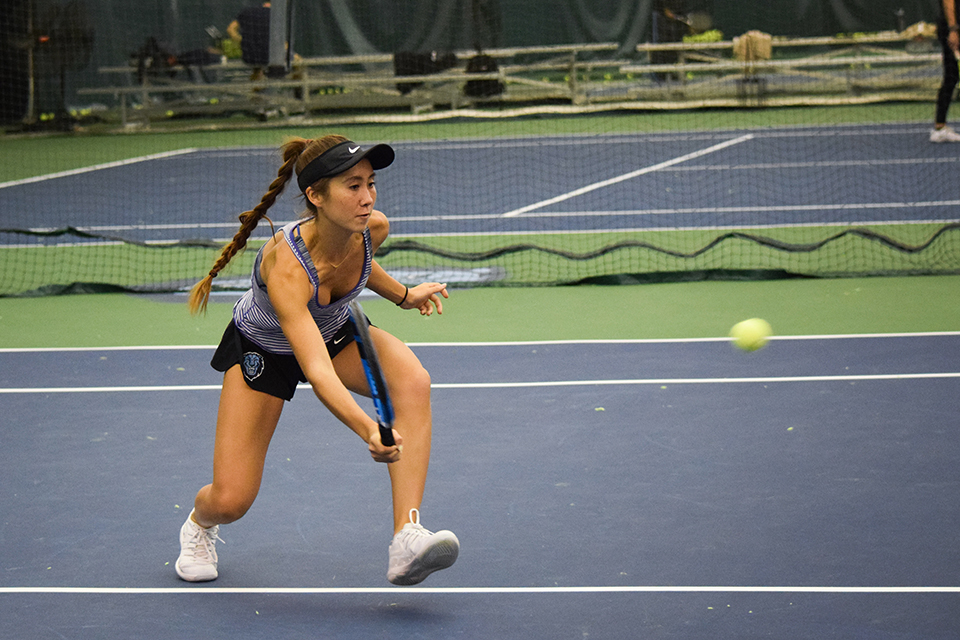 Caroline Dailey
Jennifer Kerr has emerged as a star for women's tennis, completing last spring with a 21-9 record, and 6-1 record in Ivy League play.

“The doubles team of senior Madison Stevens and freshman Cheyenne Lilienthal were defeated by Columbia’s Jennifer Kerr and Paulina Ferrari, 6-4, in an 'A' Doubles Flight consolation semifinal.” - Cornell Big Red.com

Paulina and Jennifer’s impressive performances as a doubles pair during the spring and summer were noticed by Weintraub and assistant coach AJ Nelson, who decided to have both players continue as doubles partners during the beginning of their debut fall season at Columbia. Paulina and Jennifer went 4-3 as a pairing—even making it to the finals of the Columbia Invitational of 2017.

Weintraub noted that the fall season is typically used for experimentation of doubles pairs. But as the fall season concluded, so did Jennifer’s and Paulina’s tenure as a duo.The coaches decided both players would have better results with other players on the team. Jennifer continued into the spring season with various doubles partners, playing primarily with current captain Sarah Hu.

Conversely, Paulina entered the spring season late due to a wrist injury and ended the season competing alongside current senior captain Andrea Kevakian.

While Jennifer and Paulina had success as doubles partners and hailed from the same 20-mile radius, their differences in personality, coaching, and background are reflected in their distinct styles of play.

“Kerr never made a sound during two sets and barely sat down on changeovers.” -San Diego Tribune

According to her high school coach Joe Tomasi, Jennifer’s adjustment to high school tennis at the San Dieguito Academy proved to be a slight challenge for her, but it was nothing she could not overcome.

“She just kind of had to learn that whole routine about playing high school tennis and getting past her shortcomings which she did,” Tomassi said.

Tomasi noted that Jennifer was known, and is still known, for her work ethic and humble character in the Southern California tennis world. Tomassi enthusiastically recalled the fact that opposing coaches would approach him after Jennifer’s matches finished, and ask, jokingly or not, if Jennifer would come and speak to their team about proper attitude and work ethic.

“Everyone liked Jen, even if she’s kicking your butt on the court” Tomassi said. “After the match the girls that she was beating, they wanted to be her friend.” 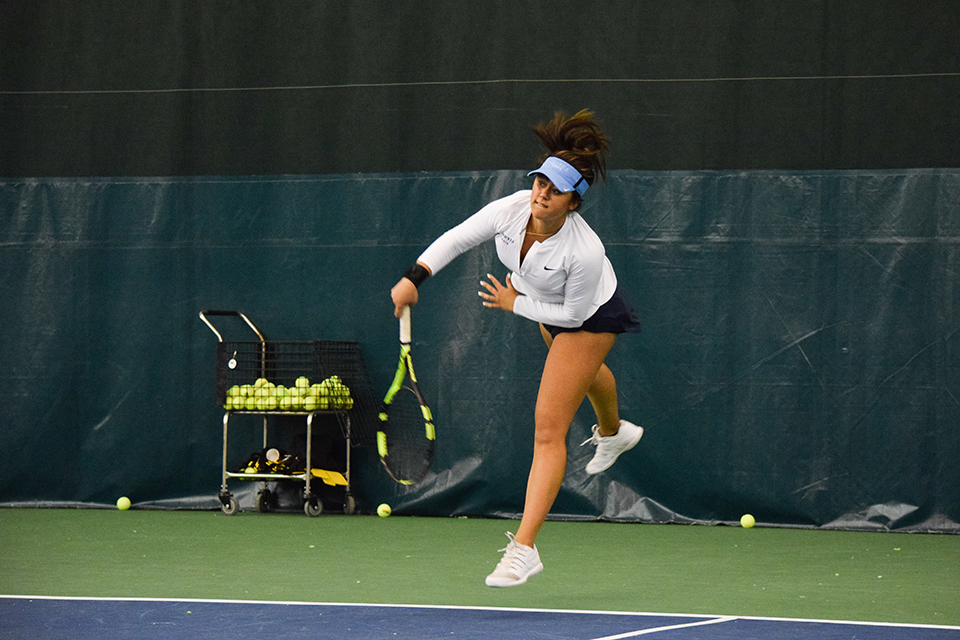 Caroline Dailey
Paulina Ferrari plays with gusto and energy, aligning well with how others describe her personality.

“Ferrari began conversations with herself, the ball, her racket and anything else around.” - San Diego Tribune

For Paulina Ferrari, competitive tennis runs in her blood. Ferrari’s father Jim was a collegiate tennis player at the University of Nevada, Las Vegas. Her grandfather, Jim Press, was a well-known former tennis player who coached several Grand Slam winners, such as Maureen Connolly and Brian Teacher.

“She never lost that drive which was so common for those her age,” Burkett said. “As a freshman, she stepped up to the leadership role naturally and never relinquished it.”

Paulina’s natural leadership continued to grow as she got older, and her confidence and outgoing personality easily rubbed off on her fellow teammates. In that way, Paulina acted as a source of confidence for the rest of the team: always cheering, always building others up.

While Paulina could often be seen encouraging and applauding her friends and teammates, she also recognized the importance of honest, constructive criticism. She was vocal when she deemed it necessary, positive, or otherwise.

“I think she was a good friend,” Burkett said. “She was always going to tell it like it was.”

Both Jennifer and Paulina drew from their natural points of strength in order succeed during their inaugural season at Columbia. Jennifer utilized her mental toughness while Paulina utilized her endless natural energy.

Jennifer emerged as a top player for the Lions during her first year. She played at the second position for singles, had the best Ivy League record of the team, 6-1, and finished with a 21-9 record overall.

“She came in with high expectations and was able to exceed them in her freshman year,” Weintraub said. “That was an incredible start to her career.”

In February of 2018, Jennifer’s years of modesty, grace, and character were recognized when she received the Evelyn Houseman Lifetime Junior Sportsmanship Award given by the Southern California Tennis Association. The award is given to junior athletes who have shown impressive character on the court.

Paulina’s success last season did not stem from an exemplary record or an outstanding award, like Jennifer’s. It came from her perseverance through her injury.

Weintraub disclosed that Paulina had wrist surgery over last year’s winter break. This injury prevented her from playing for the majority of the spring season. Nevertheless, Paulina cheered on her teammates, and just like in high school, she constantly raised their spirits.

“She has more energy than any player I’ve ever coached which is contagious and rubs off on her teammates,” said Weintraub. “She can get everyone pumped up. She’s our best cheerleader. She is a future leader of the team and everyone’s biggest supporter.”

“Paulina is full of energy and always gets people to laugh on the team,” Jennifer commented. “She was injured for part of the season last year but didn’t let that get in the way of contributing indispensably to our teams’ success.”

In limited play, Paulina amassed an overall record of 8-5.

Despite their divergent starts, both Jennifer and Paulina have emerged in full force this fall season, in which both players have claimed at least one title and several spots in the finals.

With Jennifer’s quiet confidence and Paulina’s energetic play, both players are expected to emerge as top players and, most importantly, as top leaders this season.

“I expect them both to continue to work hard and be great teammates,” Weintraub said. “I expect they both will have a major impact on our team success moving forward.”