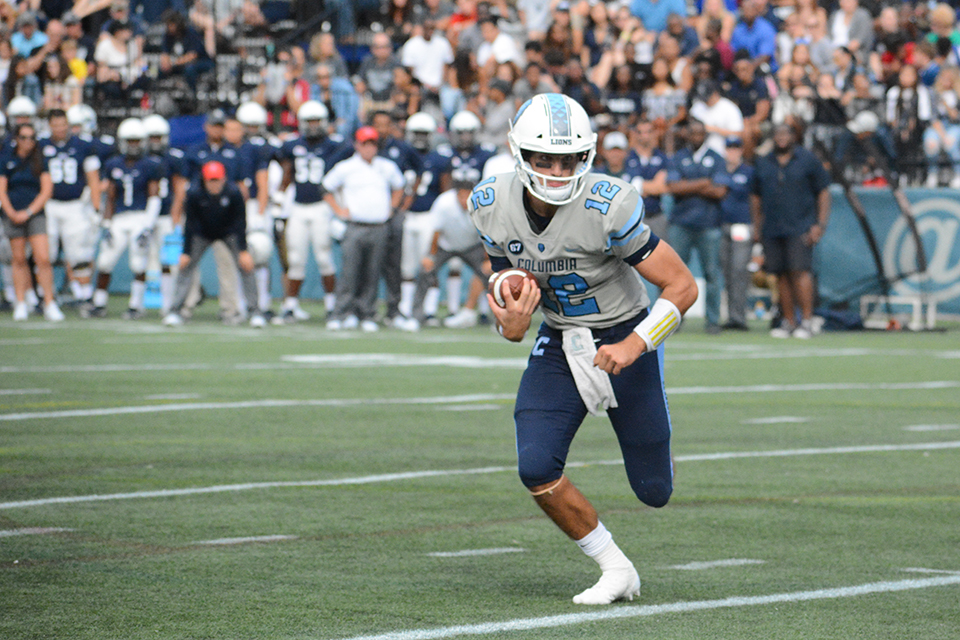 First-year quarterback Ty Lenhart will make his first career start at Harvard on Saturday looking to lead the Lions to their second straight Ivy victory.

After its first Ivy League win last week, football will take on Harvard this weekend in Cambridge.

The Lions (4-3, 1-3 Ivy) last faced Harvard (3-4, 1-3 Ivy) a year ago, losing 21-14 with several trappings having already lost its first game of the season just one week before. The Harvard game was the Light Blue’s only loss at home last season.

Last weekend, the Lions defeated the defending Ivy League champion Yale, 17-10. Although Columbia came out on top, the game was, again, a costly one.

Because its starting, backup, and third-string quarterbacks had already suffered injuries in prior weeks, Columbia was forced to use senior quarterback Ryan Suitt, who had not started a game since he came to Columbia. Suitt looked uncomfortable under center, completing only three of his 16 passes. His 16-yard touchdown pass to sophomore tight end Casey Mariucci, however, crucially tied the game in the third quarter. Suitt’s day ended quickly thereafter, as he suffered a concussion and was ruled out for the rest of the game.

Fifth-string junior quarterback Matt Dame had to play out the rest of the game, his first ever in that position, and the Lions had to rely on other members of the team to compensate for their losses, which, in the end, they did. A 30-yard touchdown run from first-year running back Ryan Young and senior safety Ryan Gilbert’s last-second interception eked out a tenuous victory for the Light Blue in the final quarter of the game,

Although injuries have depleted the Lions, certain injured players, including some of the most integral members of the team, have begun to return to the field. Senior safety Landon Baty returned last week for the first time since the opening game of the season, making an immediate impact with a pick. First-year quarterback Ty Lenhart, who suffered a concussion against Dartmouth, will start Saturday’s game. Lenhart leads the team with six rushing touchdowns and completed 12 of 14 passes for 97 yards against the Big Green.

Another offensive threat would be Young, who had a breakout game against Yale with 19 carries for 98 yards and a touchdown, all of which were career highs for the first-year. His offensive breakout comes at a convenient time, with junior running back Lynnard Rose ruled out for this weekend, and first-year running back Dante Miller out for the year.

The Light Blue’s injury epidemic can be seen most prominently in its offensive output which has only scored 49 points in Ivy League play, the lowest in the division.

Like Columbia, the Crimson has been mediocre within the Ivy League this season, and will enter Saturday’s contest on the back of two consecutive Ancient Eight losses. Harvard’s only conference win came in its opener against Brown, which has yet to win a game in all contests. All of Harvard’s losses have been one-possession games thus far.

A Columbia victory on Saturday would be Bagnoli’s first over the Crimson since he took over at Columbia in 2015. Kickoff is slated for Saturday at 12 p.m.