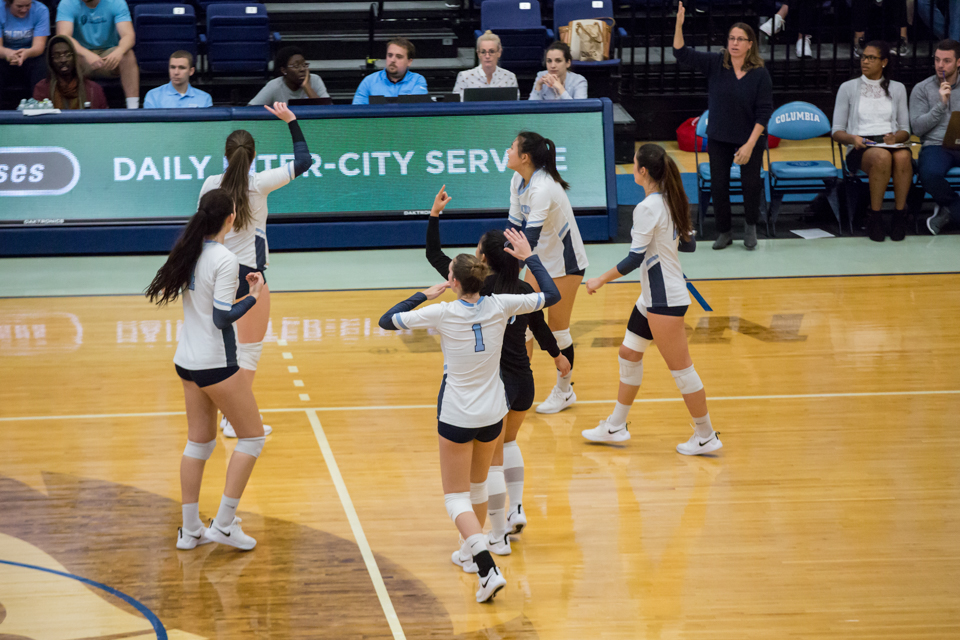 Volleyball is led by head coach Allison Keeley, who was hired this past March.

Cheering is a given at any sports competition. Whether it be passionate shouts or suspenseful droning, it is always present and practically commonplace. Yet, any sports fan knows that there are the few special instances when a crowd hushes in awe. Those in attendance at Columbia’s match against Yale on the first Friday night of October appeared to revel in such a moment.

It was the second set of the match and Yale led 8-6. The Bulldogs, who had a 1-0 set lead, served the ball across the net, and the Lions were ready. Amid loud cheers from fans of each team, sophomore setter Audrey Cheng set the ball high in the air. The crowd immediately grew silent, speechless in anticipation.

A second later, the ball made contact with first-year outside hitter Emily Teehan’s palm, flying over the net and slipping past Yale’s fingers. When asked after the game how she became so in tune with her players, Keeley laughed and said, “Isn’t that what a coach is supposed to do?”

Keeley’s aspirations seem ideal, but that has not always been the case for Columbia volleyball. Previous head coach Brie Katz fell under harsh criticism for a stagnant lineup and lack of communication, which often led to tension between players and coaches.

“Something that Brie had in the past was that she had a very set lineup of players that were going to play the entire time,” senior captain and outside hitter Luciana Del Valle said. “It was a lot of the same.”

When Katz decided to pursue other opportunities, Intercollegiate Director of Athletics Peter Pilling likely recognized this issue and knew that volleyball needed an experienced coach willing to make the program their own. He announced Keeley’s hiring in March 2018.

Armed with a low ponytail and a warm smile, she is up to the challenge of rebuilding the program. Claiming not to be a volleyball geek, she still comes with more than 20 years of coaching experience and 12 years working in Division I athletics. She is unafraid to carve her name into Lions history, believing strongly in her ability to connect to the team.

Her structure-oriented perspective fits well with the type of driven athletes present at Columbia, and volleyball is no exception. Keeley discussed her first interactions with the team, praising their work ethic.

“In the beginning of the season, I remember asking, ‘How many of you guys watch film?’ Everybody raised their hands. That doesn’t always happen,” Keeley said. “It makes my job as a coach very easy.”

From the get-go, Keeley was unafraid to break down the game and revisit the basics. According to junior libero Kalie Wood, the team’s first practice was atypical for a Division I team. The first 40 minutes were spent relearning how to hit the ball over the net, much to the players’ disbelief. There was an aspect of “how”, such as how to hit the ball or how to react defensively, that the players had not considered before.

Along with focusing on establishing a foundation, practice was moved to the early morning, creating a period of adjustment for veteran players and first-years alike. This flipped schedule changed their sleeping and eating habits, creating consequences for those who tended stay up late, and encouraging the team to eat, warm up, and work at the same times before matches. Even during away games, the team has routinely held group study sessions in hotel conference rooms.

This tradition has caused a lot of players to end up with similar schedules, and provides a consistency to the academically rigorous and unpredictable lives of a Columbia University athlete. As a result, there has been tighter bonds between the players, with a particular focus on senior captains and first-years.

“We’ve become this community, a family. We’re here to support each other and encourage each other, not just with volleyball, but with life as well,” Del Valle said. “School is hard here. So we’re telling freshmen what they should do or majors they should be looking at.”

This holistic approach and unique sense of family has brought the team together in ways Katz was unable to do in her later seasons. The difference is seen both on and off the court. The entirety of this season, Keeley and her coaches have also been focused on strengthening each individual player, guiding them to hone in their abilities and provide aid to their teammates.

“She’s able to give us a lot of constructive criticism that is individualized for each one of us so we are able to recognize the areas we need to work on, as well as the areas we are doing well in,” Teehan said. “It’s about being able to raise that level as a whole team.”

Although Keeley’s commitment to the team is clear, it is her commitment to coaching that makes the difference. She credits this dedication to an Olympic coach who inspired her passion for the player over the sport.

Additionally, senior captains often go to Keeley’s office to relay questions and concerns from their teammates. Conversations begin with what aspects of play they wish to focus on or what they find challenging, and they often end with laughs.

“Coming from a polar opposite of not having that communication or baseline with the past coaching staff,” Wood said. “Coach Keeley is another extreme in that we’re all working together and with each other.”

This close communication has not only made it easier for Keeley, but has made the volleyball family stronger. There appears to be no difference between the wants of the coach and the team. They hope to finish above .500 and they plan to place in the top four in the conference.

Whether cheering on the sidelines or backing each other up on the court, the team looks to be more cohesive with every game. Columbia volleyball is truly having a renaissance of the “we.”

With the end of the season approaching, Keeley and the team look to build upon each other and rally. Working harder than ever and energized from their victory against Yale, the Lions are more than willing to bring home another win.

“We’ve been working on how will we continue to build this program even when we’ve hit rock bottom,” Wood said. “We want to still construct that team mentality so that by August, we’ll really be ready to compete.”

Whatever happens over the next week, Columbia volleyball has begun a new and inclusive chapter, ushered in by a coach whose love of the sport is only eclipsed by her love of her players.

“I looked at coaching and said, ‘This is a system and a process that makes sense to me,’” Keeley said. “More importantly, it’s something I can offer back to athletes.’”