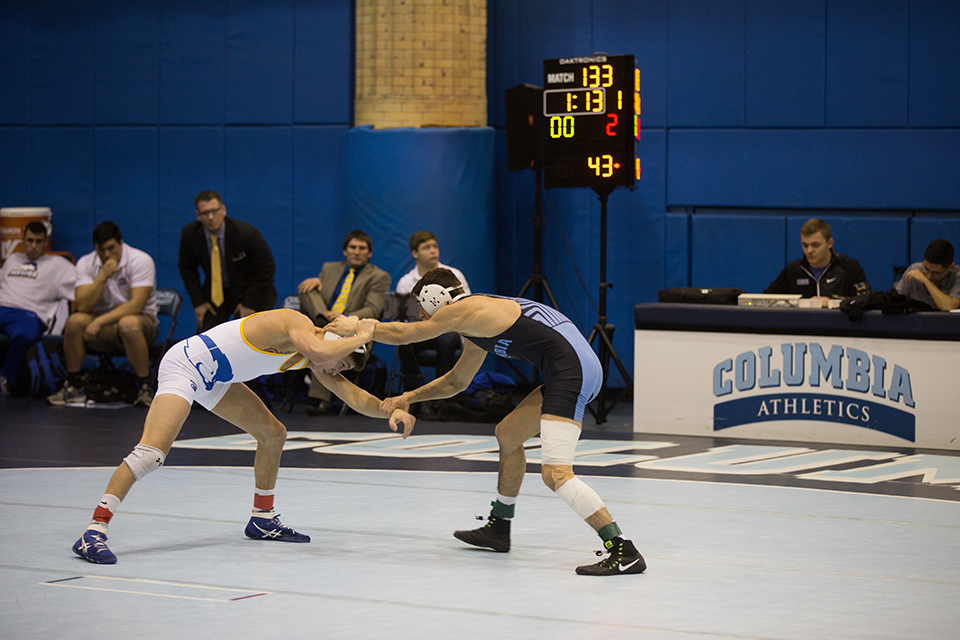 Wrestling cruised to a first-place finish in Lock Haven over Thanksgiving weekend.

Wrestling blew its competition away to gain a first-place victory with 101.5 points at the Mat-Town Open in Lock Haven, PA over Thanksgiving weekend, finishing more than 40 points higher than the next ranking team.

Half of the 16 wrestlers Columbia sent to the tournament finished in the top three of their respective weight classes, and three of them claimed first place titles.

Continuing his success from last weekend, first-year Matt Kazimir easily dominated the 133-pound weight class. His first match against Finger Lakes Prep’s Enrique Sanchez lasted only two minutes and twenty seconds, and ended with Kazimir pinning Sanchez to win by fall. His second and final match against Wyosem Prep’s Ramazan Attasaouv proved only slightly more difficult for the first-year, who triumphed with a 6-0 win. Kazimir ended the day with the first-place title, securing the Light Blue a second consecutive tournament victory in the weight division.

Not to be outdone by his younger teammates, junior Laurence Kosoy boasted outstanding victories in the 165-pound weight division, cementing the Lions’ place as top competitors. His first-round match against Finger Lakes Prep’s Nathan Thacker was almost akin to slaughter, with Kosoy defeating Thacker 17-0. After an impressive 5-0 win in the semi-final round, Kosoy crushed Virginia’s Cameron Coy with a swift pin in little over four minutes and left the tournament with the Lions’ final first-place finish.

Additionally, first-year Sam Wustefeld posted a remarkable second-place victory in the 197-pound weight class, fighting his way to the final with a slim 3-2 win against Unatt-St. Joseph’s Kolby Franklin and a wider 9-2 decision against Bucknell’s Joe Scott.

Senior Max Elling and first-year Joe Franzese both claimed third-place titles in the 165-pound and 184-pound divisions respectively, contributing to the Light Blue’s first-place victory at the tournament.

This weekend was the first time Columbia competed at the Mat-Town Open, and the team certainly did not disappoint. Winning by an unprecedented 101.5 points, the Lions commanded a giant victory over nationally-ranked teams such as Ivy League Champion Cornell and nationally ranked Lock Haven, continuing to raise hopes for their success later on in the season.

The team will host its first dual in Columbia’s Blue Gym at 2 p.m. on Saturday, Dec. 8.