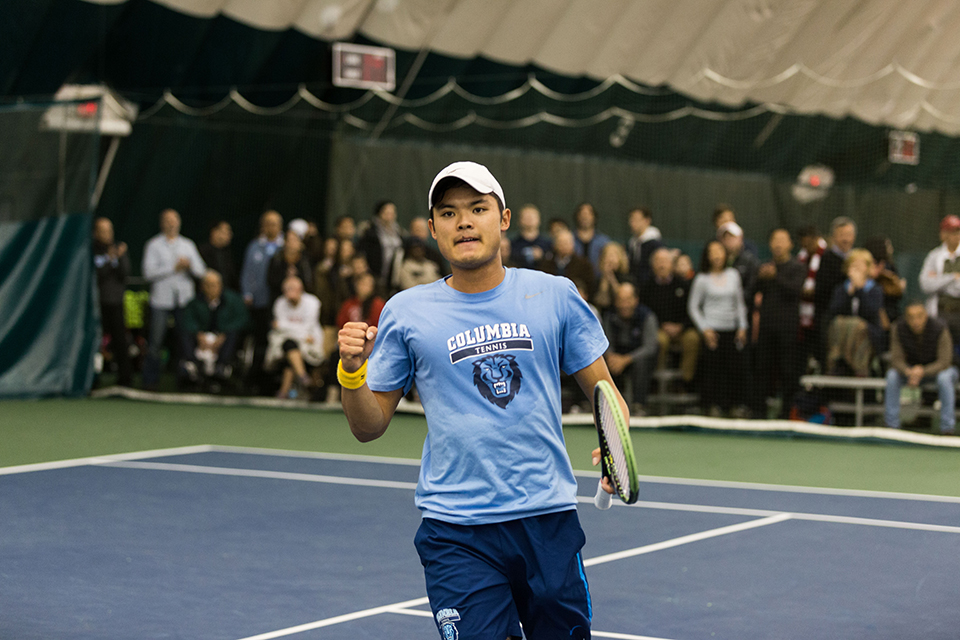 Above, senior Victor Pham competes at a match in 2017.

Men’s tennis triumphed over its competition this weekend against St. John’s at the Dick Savitt Tennis Center.

The Lions, fresh off the news of head coach Bid Goswami’s impending retirement, continue to impress during this legacy season. Following the success of its Ivy-opening win over Dartmouth, the team, ITA-ranked no. 12, cinched a win against St. John’s 6-1, bringing its spring streak to 3-0.

Adding to Columbia’s tally, sophomore Austen Huang took the only three-set win of the day 6-4, 6-3, 6-1 against Aditya Vashistha. Sophomore Jack Lin, no. 11 in ITA rankings, triumphed in an impressive win against Andrei Crapenco in a 6-3, 6-1 match.

Junior Adam Ambrozy, however, was unable to match the swings of his opponent, giving his match to Alan Nunez Aguilera, 7-5, 6-7 (2), 6-2. After dropping the first set to Aguilera, Ambrozy was able to pull through in the second set. Aguilera, however, prevailed in the third set, granting St. John’s its lone point for the day.

In the doubles event, the pair of Pham and sophomore Rian Pandole triumphed over Andrei Crapcenco and Alex Roszkowski in a swift 6-0 match. Lin and Tang had similar success in the top-court spot with a 6-0 sweep over Aguilera and Charlie James. Ambrozy and senior Will Matheson had more difficult competition but managed to cinch a win against the Red Storm’s Aditya Vashistha and Udayan Bhakar.

The main draw of the ITA Indoor Team Championship will begin on Friday, Feb. 15, in Chicago, Illinois.