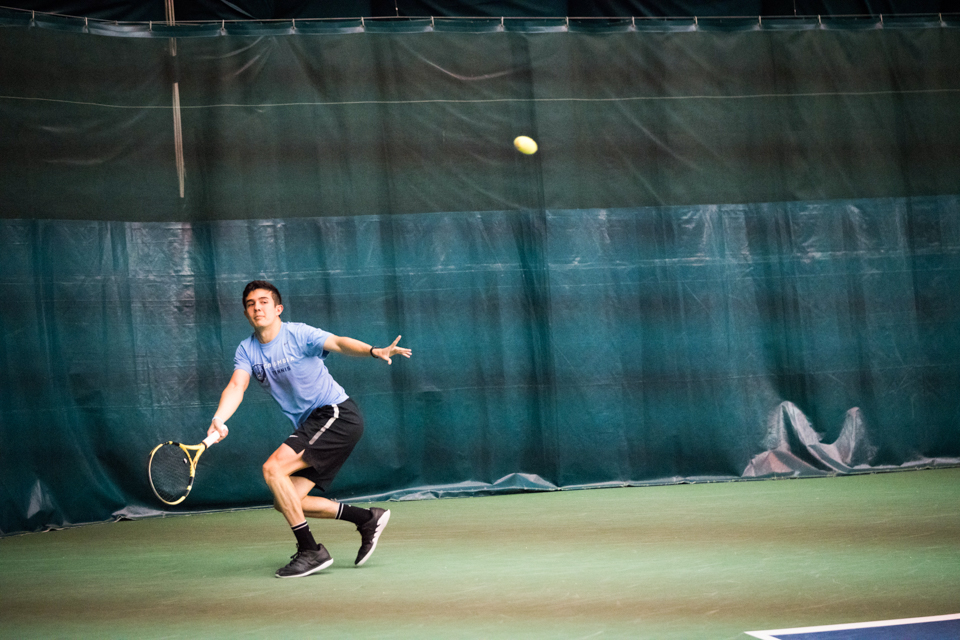 Junior Alex Keyser continued to prove himself as a force on the court, defeating Ben Collier in a 6-1, 6-3 match at sixth singles.

Many would not call tennis a loud sport, but at the Dick Savitt Tennis Center this weekend, the enthusiasm could be both felt and heard among the crowd of students and alumni as they chanted players’ names and “Go Lions!” at men’s tennis’ Ivy League opening matches against Yale and Brown.

Perhaps it was the encouragement of onlookers that allowed the Lions to clinch the consecutive wins, bringing their spring streak to 12-3, 2-0 Ivy.

After blanking the University at Buffalo last weekend 4-0, and with the impending retirement of Head Coach Bid Goswami, the team had a lot to prove in its doubleheader weekend.

In its Ancient Eight opener, the Light Blue was able to cinch the lead early on the doubles court. In second doubles, sophomore Rian Pandole and senior Victor Pham were able to capture their match 6-2 against the Bulldogs’ Nathan Brown and Dylan King. Giving the early edge to Columbia was the tandem of senior Will Matheson and sophomore Jack Lin, currently ranked No. 22 by the ITA. Lin and Matheson bested competitors Ryan Cheng and Cody Lin 6-4 in their first win as a pair for the spring season.

On the singles court, senior Timothy Wang made quick work of his opponent 6-0, 6-2 on court three. Matheson was victorious in sixth court singles against Alan Sou, 6-0. 6-2. No. 38 Pham was also successful in his match, beating Dylan King 6-1, 6-2 in top court singles.

After shutting out Yale 4-0, the Lions returned to the courts on Sunday to defeat Brown 4-1.

In doubles, the team struggled against the Bears. Pandole and Pham brought the Light Blue an early lead, defeating Roger Chou and Charles Tan 6-0. However, Wang and sophomore Austen Huang were unable to replicate their teammates’ results, falling to Peter Litsky and Teddy Van Eck 6-4. The decision came down to Lin and Matheson, who ultimately fell in a tiebreaker, 7-5.

No. 18 Lin took home his first singles win for the weekend after sitting out the singles matches against Yale, 6-4, 6-2.

Wang made easy work of his opponent at fourth singles 6-0, 6-1. Junior Alex Keyser continued to prove himself as a force on the court, defeating Ben Collier in a 6-1, 6-3 match at sixth singles.

Moving forward, men’s tennis will have to maintain its quality of play in order to win its sixth consecutive Ivy League title. After blanking Princeton 4-0 and earning a 4-2 victory against Penn last spring, the team will have to live up to its legacy in order to clinch another Ancient Eight crown.

Ivy League play will continue on Friday, April 10 at 1 p.m. at Princeton.