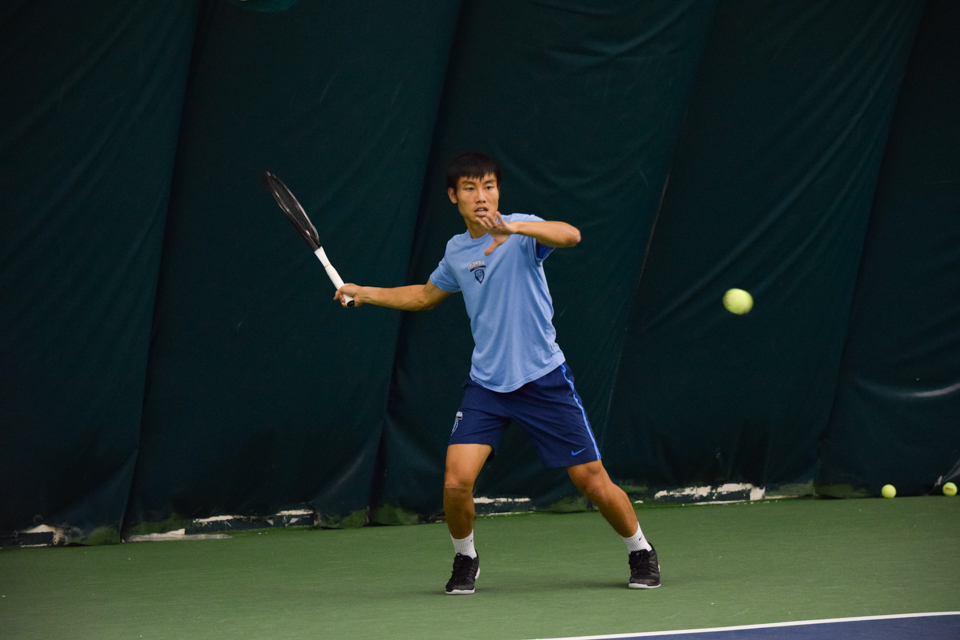 After a successful doubleheader against Brown and Yale last weekend, No. 16 men’s tennis continued its streak, bringing the team’s spring record to 14-3, 4-0 Ivy.

In their first away match of the Ivy season, the Lions proved that they can compete just as competitively away as they can at home. Columbia took home its first victory of the weekend at Princeton on Friday, matched by a win at home against Penn on Sunday.

After a successful doubleheader against Brown and Yale last weekend, No. 16 men’s tennis continued its streak. The Princeton and Penn matches bring the team’s spring record to 14-3, 4-0 Ivy.

At Princeton, the Lions struggled on the doubles court. Sophomore Rian Pandole and senior Victor Pham defeated Justin Barki and Bill Duo 7-5 at second court doubles. Junior Adam Ambrozy and sophomore Austen Huang were unable to replicate the success of Pham and Pandole, as they were bested in a tiebreaker, 7-6 (4).

In top court doubles, it was up to sophomore Jack Lin and senior Will Matheson to determine which team would take the early advantage. Lin and Matheson, currently ranked No. 26 by the Intercollegiate Tennis Association, eventually fell to No. 17-ranked pair Payton Holden and Ryan Seggerman. Lin and Matheson had the opportunity to clinch the win in a tiebreaker, but the duo was unable to keep up with the Princeton pair and fell 7-6 (2), giving the initial edge to the Tigers.

No. 114 Ambrozy shut out his opponent 6-1, 6-2 in third court singles. Senior Timothy Wang and Huang clinched the win for Columbia at fifth and sixth singles, respectively.

No. 120 Pandole’s match was the sole loss in singles against Princeton, as he fell to Will Peters 7-5, 6-2. Pandole’s defeat marks his first loss in singles of the spring season. This match brought the final score to 5-2.

Up against the Quakers on Sunday, the Lions asserted their dominance on their home court, blanking Penn 7-0.

In doubles, sophomore Jason Lui and Ambrozy defeated their opponents 6-0 on court three.

The other pairs played more strenuous matches but were able to duplicate Ambrozy and Lui’s results. Lin and Matheson took the set against Edoardo Graziani and Kyle Mautner 7-6 (3). Pham and Pandole also won with a tiebreaker, besting Dmitry Shatalin and Kevin Zhu 7-6 (4), giving the Lions the doubles point.

In top court singles, Pham easily beat No. 79 Kyle Mautner 6-1 in the first set. In the second set, Mautner regained his footing but still fell to Pham 7-5. Junior Alex Keyser and Lin also earned wins on courts six and two.

Wang provided Columbia the final point of the day in a 10-point superset. After capturing the first set and tiebreaker against Shatalin 7-6 (5), Shatalin came back and beat Wang in the second set 6-3. However, Wang won the final super tiebreaker 1-0 (5).

Up next, the Lions will take on Dartmouth and Harvard in Ivy play. The team’s first Ivy defeat at home since 2011 came against Big Green last spring. Whether Columbia will be able to avenge last season’s Ivy loss will be determined this weekend.

The Lions will continue their quest for the Ivy League title on Saturday, April 20 at 1 p.m. at Dartmouth.

A previous version of this article misrepresented the scores of two doubles matches, incorrectly stating that both matches went to a second set. Spectator regrets this error.