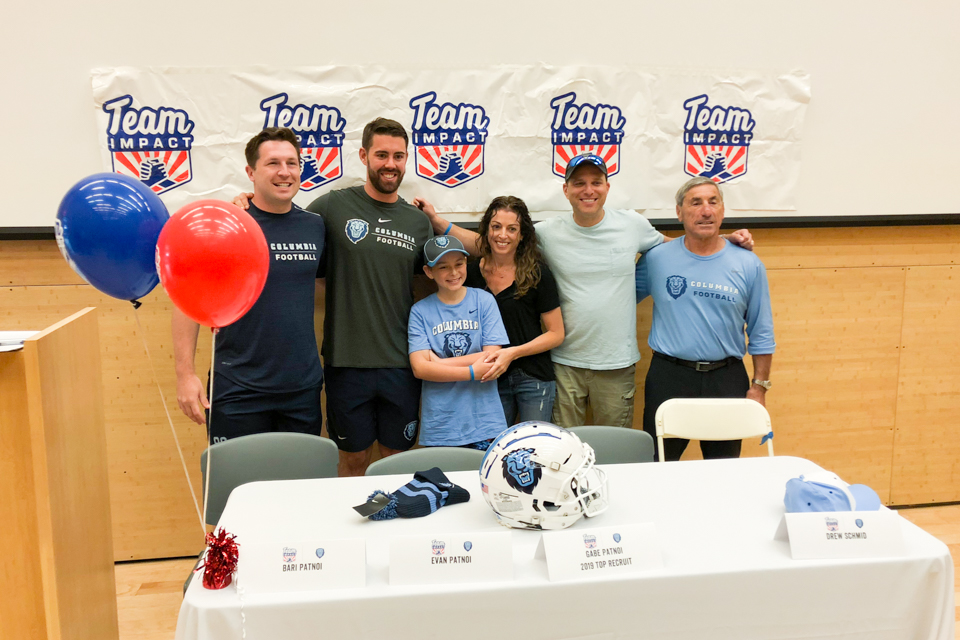 Gabe Patnoi and his family pose with the coaching staff after signing his letter of intent.

In a ceremony attended by the entire Columbia football team and hosted in collaboration with the nonprofit Team IMPACT, the Lions made 12-year-old Gabe Patnoi the 124th member of the team when he signed an official letter of intent on Saturday morning.

Patnoi’s addition to the football program marks the seventh time that a child facing a serious or chronic illness has joined a Columbia athletics team through the work of Team IMPACT. While the organization’s intent is to help improve the child’s confidence, optimism, and sense of belonging, members of the Columbia football team emphasized that they will benefit from Patnoi’s inclusion on the team as much as—if not more than—he will.

“His ability to overcome adversity, his resiliency, [and] his mental and physical toughness are all the things that make a locker room better,” head coach Al Bagnoli said in his official remarks. “It makes a program better. It makes lifting sessions better. And I think we’re all huge beneficiaries of having Gabe as part of our program.”

Gabe is battling Ewing sarcoma, a rare type of cancer that occurs in bones or in the soft tissue around them. While advancements in research mean that the disease is now cured at a high rate, Gabe had to undergo both radiation and chemotherapy. His treatment has temporarily prevented him from doing what he is most passionate about: playing sports.

“Gabe has always been such an amazing kid and has always been into sports since the age of like 3,” Evan Patnoi, Gabe’s father, said. While Gabe loves to play “soccer, basketball, [and] football … he, unfortunately, can’t play any sports for a little bit so just being able to be involved in it, it’s been fantastic.”

When Team IMPACT matches a child with a collegiate athletics team, the child becomes an official member of that team for the next two years, joining them at practices, games, team dinners, and so much more. For senior linebacker and captain Michael Murphy, the opportunity to have Gabe as a part of the team is what motivates him to play the game.

“It’s huge for us. That’s kind of our purpose here,” Murphy said. “To give back, to help people, to meet kids like Gabe who have been through so much and still go through so much. To serve as a light for him and help him through everything he’s going through. ... It’s better for us, it’s better for the entire program.”

Immediately after signing the letter of intent, the entire team began chanting Gabe’s name before breaking into two renditions of the Columbia fight song, “Roar, Lion, Roar.” For the Patnoi family, the level of support and enthusiasm they have felt since becoming a part of the Columbia community has left quite an impact.

“For our family, it’s been amazing—a journey,” said Evan Patnoi. “It’s been nine months, and so much growing for Gabe. He’s gone through so much so to be a part of this through Team IMPACT and Columbia, it brings tears to my eyes. Just the fact that they’ve opened up their doors and allowed Gabe to come in.”

While Gabe may not have been brought to tears as his father was, the experience has brought a lot of happiness to a kid who, through 12 years, has overcome more than most people will face in their entire lives.

“It was really nerve-wracking in the beginning, but now being here with a lot of new teammates and friends, it really brings joy to me right now and I feel like I’m going to have a really good time over the next two years,” said Gabe.

While some of his excitement stems from just being a part of the team, Gabe is enthusiastic about the Lions’ prospects this season, as the team is coming off its best two-year stretch in program history.