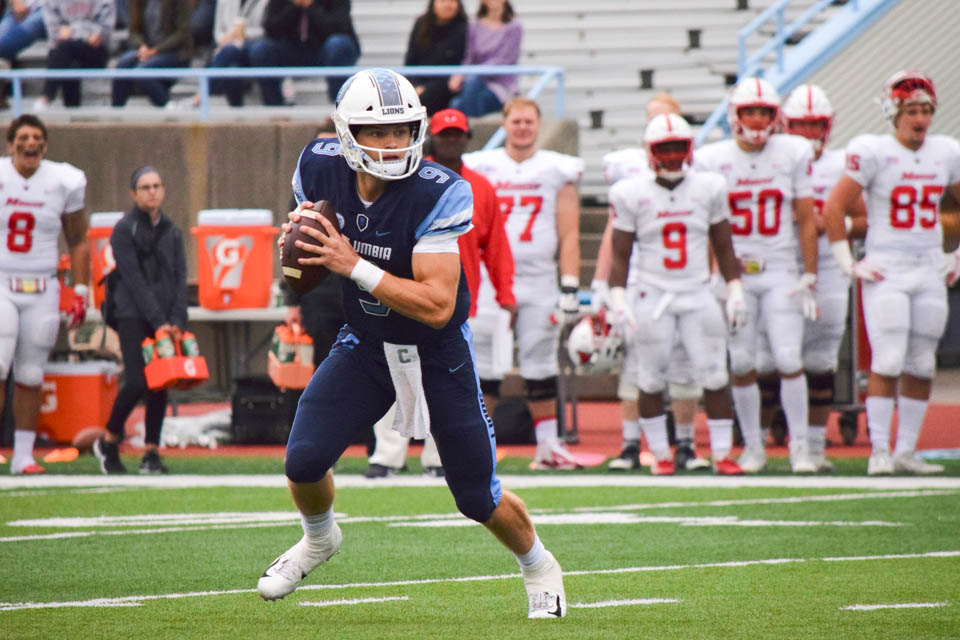 Starting quarterback Josh Bean finished 11-22 for 78 yards and an interception.

The Lions got off to a slow start in their first game of the season but scored 24 unanswered points after giving up two early touchdowns to Saint Francis University en route to a 31-14 victory, their fourth straight victory against Northeast Conference opponents. The Lions were able to dig themselves out of a 14-7 hole thanks to a combination of some explosive plays and a stifling defense that did not allow the Red Flash to score after the first quarter. However, Columbia may have reason to be concerned if it doesn’t find consistency at quarterback.

Following a season in which the Lions’ primary obstacle was the constant turnover at the quarterback position, fans were anxious to see if junior starter Josh Bean could provide the stability under center that the team so desperately missed last season. If head coach Al Bagnoli’s plan against Saint Francis is any indication, the battle to lead the Lions is seemingly unsettled, as both Bean and sophomore Ty Lenhart played multiple series in Columbia’s 31-14 victory.

Bean, who finished 11-22 for 78 yards, an average of 3.55 yards per attempt, did not start out the season the way he hoped to, as he threw an interception on just the second play from scrimmage. The pass was intended for sophomore Mike Roussos, who was running a slant over the middle when Bean overthrew him. Instead of hitting Roussos, the ball landed in the arms of Saint Francis defensive back Gio Vonne Sanders, who returned the ball 48 yards to the Columbia 7-yard line. From there, the Red Flash were able to punch it in on their first offensive play, putting them up 7-0 early on.

After the two teams traded punts, the Lions handed the ball off to sophomore running back Ryan Young, who subsequently busted through a confused Saint Francis defense and was practically untouched on his way to a 65-yard touchdown. The play displayed impressive cohesion from multiple units on offense, as a fake handoff to Roussos fooled two members of the Saint Francis defense, which made it easier for the offensive line to open up a big hole up front for Young to run through. The 5-foot-9, 225 pound Young displayed impressive speed for a running back of his size by outrunning the defense to tie the game at 7 and give him 65 of his career-high 98 yards on the day.

When Saint Francis got the ball back, it didn’t waste any time in taking back the lead. Six-foot-8 redshirt sophomore receiver EJ Jenkins caught a deep shot down the sideline and hauled the pass in over junior defensive back Will Allen. Allen, who stands nearly a full foot shorter than Jenkins, was not able to make a play and Jenkins took advantage of the one-on-one coverage by running into the endzone for a 74-yard touchdown.

Down 14-7 after only five minutes, the Lions defense took control of the game and did not allow the Red Flash to score for the final 55 minutes. The defense was led by sophomore linebacker Cam Dillon, who made his presence felt all over the field and finished with 10 tackles, 2.5 tackles for loss, and a sack. Dillon’s impact was seen the most on a drive in the third quarter, where he sacked the Saint Francis quarterback on second down, then applied the pressure on third down that led to a sack from first-year defensive lineman Mitchell Shinskie. The Lions were fortunate to have such a formidable defensive showing, as the quarterback play did not inspire similar confidence.

Following Bean’s interception and the long touchdown run, the junior signal-caller was unable to move the ball downfield on any of the next few drives, prompting the coaches to give Lenhart a shot at quarterback. Lenhart proved that decision to be a good one, as he threw for multiple first downs before eventually running the ball in himself from the 4-yard line to tie the game at 14. Then, on the next possession, Lenhart faked a screen to senior Josh Wainwright before finding senior receiver Ronald Smith for a 61-yard completion, down to the 1-yard line, where Roussos ran the ball in as a wildcat QB to put the Lions up 7.

This was not Roussos’ only score of the game, however, as the dynamic returner showed off the skills that made him the second first-year player in school history to earn First Team All-Ivy League honors. With the Lions up 10, Roussos fielded a punt at Columbia’s 44-yard line before weaving his way through numerous Saint Francis defenders on the way to a touchdown. With the score, Roussos became one of three players in program history with multiple punt return touchdowns. While high-quality special teams play is great, the Lions have to nail down their quarterback if they want to achieve the goals they have set for themselves this season.

Lenhart, who finished 5-8 for 101 yards, certainly raised questions about who should be the Lions starter going forward. Whether Bean can bounce back from his subpar performance in the opening game will be a critical question moving forward.

The Lions host Georgetown for their home opener on Saturday, Sep. 28.