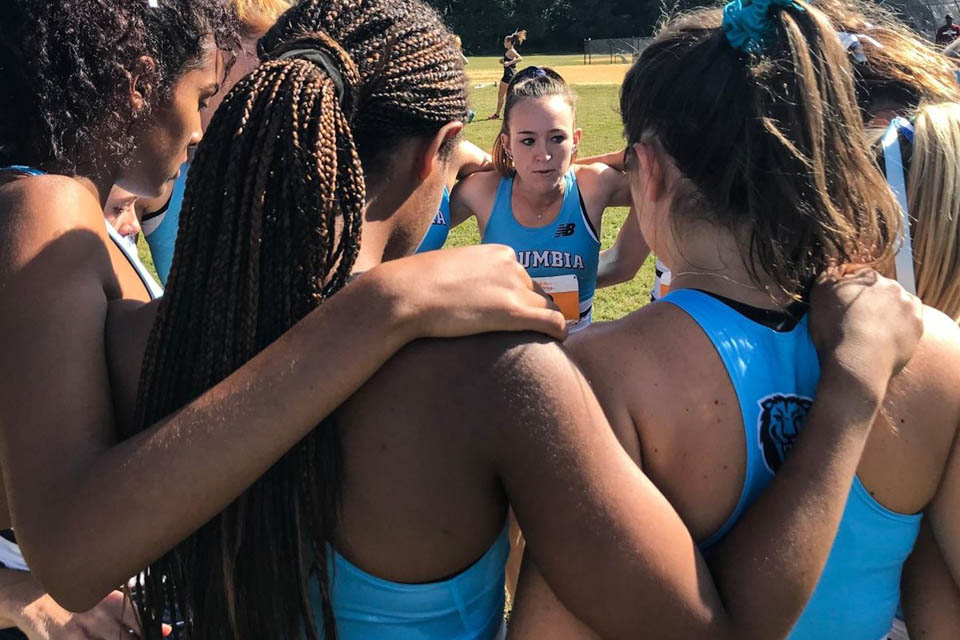 Katie Wasserman won her race with a personal best time of 17:42.9.

Part of the challenge of the first race of the cross country season, director Daniel Ireland said, is that it’s difficult to know what to expect.

“You haven’t really hurt really hard since last spring when you raced. Some kids handle that no problem; other kids forgot what it felt like to hurt,” he said.

The results of the Iona Br. John "Paddy" Doyle Meet of Champions, held at Van Cortlandt Park on Sept. 20, made it clear that the Columbia cross country team still knows how it feels to hurt. The women’s team swept the top three individual spots to finish in first place, while the men earned a fourth-place finish in a field of more than a dozen teams.

Although Columbia’s first race was technically on Sept. 7, this was the season opener for many of the Light Blue’s top racers. Senior Katie Wasserman and junior Allie Hays shined, as did senior Kenny Vasbinder. Both Wasserman and Hays earned personal bests and finished first and second, respectively. Wasserman finished in 17:42.9 with Hays right on her heels at 17:43.0.

To most spectators, Van Cortlandt Park appears relatively flat. Runners traverse the south perimeter of the park before completing the middle portion of the race in the woods. Behind the woods is the hilly portion of the course, home to what sophomore David Vorbach said is known as “Cemetery Hill.” According to Vorbach, moving up is more challenging in the back hills, which makes a strong start even more important for runners. He said that the team has stressed a “pack mentality” for racing.

“There’s been a lot of emphasis on just making sure we’re all in the race mentally, racing as a team,” Vorbach said. “We have to be greater than the sum of our parts, is what we’ve been told a lot.”

In the men’s and women’s races, Columbia runners set themselves up for success early by pushing their way to the front of the pack. Wasserman and Hays never faltered as they led the field for the majority of the 5k race. At the finish line, the pair’s strong kicks, along with senior Bianca Alonzo’s valiant effort, helped Columbia clinch a first-place finish.

“Bianca ran great being [third for Columbia],” Ireland said. “She’s back to where she ran two years ago when she ran well for us.”

“We have some improvement, but we’re in a good place right now. I think the girls should be positive and happy about today,” Ireland said.

The Lions also had a strong showing in the men’s race. Multiple Columbia runners pushed into the front and maintained their positions for much of the 8k race as the field narrowed. Vasbinder claimed an early spot in the leader pack and held onto second place as the runners completed mile three. Both Vasbinder and eventual winner, Iona’s Johnjack Millar, broke away from the field as the leaders entered the woods for the final mile. Neither wavered, and Vasbinder slid into second with a scorching 24:31.7, four seconds behind Millar.

What makes this meet especially significant is that a number of athletes didn’t participate in the meet due to illness, and that some of the girls who raced were sicker than they let on.

“We’ve just got to get some of the sicknesses out of the way and get back,” Ireland said. “If we work hard and take care of ourselves and stay healthy, then we’ve got a chance to do what we did last year.”

Moving into Ivy play, the team has established new goals, which include defending the women’s Ancient Eight crown and getting back to the NCAA championships, hopefully as a top 25 team. In the latest USTFCCCA poll, the Columbia women’s team was ranked No. 19.

Next week, both teams will head to Minneapolis for the Roy Griak Invitational.

“We’re not really sure what to expect from the other teams [in Minneapolis],” Vorbach said. “We want to see how we race against other teams in the nation, but we want to really work together as a team and just get ourselves good placings.”