Women’s soccer has dominant weekend ahead of Ivy play, shutting out NJIT, Drexel

Women’s soccer has dominant weekend ahead of Ivy play, shutting out NJIT, Drexel 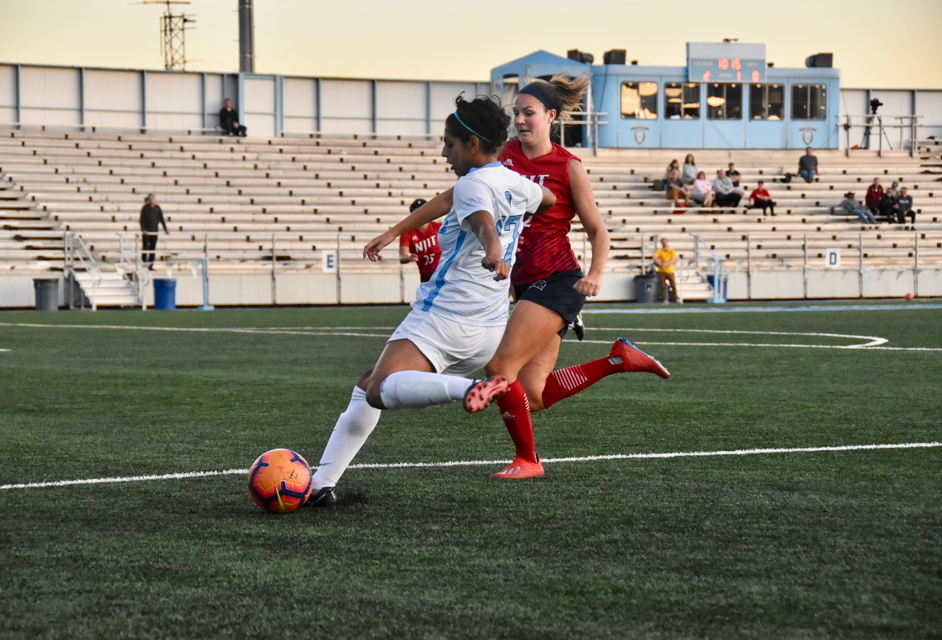 Soccer did not allow a single goal in either game this weekend.

In its final tune-up before Ivy League play begins, women’s soccer dominated its opponents at home with a 2-0 win against New Jersey Institute of Technology on Friday and a 4-0 win against Drexel on Sunday. For the Lions, the two victories concluded their most successful pre-Ivy League run in a decade and could foreshadow a successful season to come.

After a 0-1 loss at Hofstra on Sunday, Sept. 15, the Lions bounced back to secure five wins prior to Ivy League play for the first time since 2010. The team has shown a habit of starting slow in the past, tending to call into question their title chances even before conference games get underway.

This year’s team aims to break this trend, and more records, this season, as they’re working to clinch 10 wins in a single season for the first time since 2008, five years before current head coach Tracey Bartholomew arrived at Columbia. Senior defender Amalya Johnson said after the Friday game that the team was one step closer to this “big goal” of being Ivy League Champions.

While the Lions are aiming to reach new heights as a team, Friday’s match against NJIT was an important first step toward some personal redemption stories as well. Senior forward Emily Koe and junior forward Jordyn Geller, both coming back from injuries, scored at the 17th and 30th minutes, respectively, giving them confidence for a full recovery.

Friday’s game also drummed up excitement for the potential of the younger players on the team, as Bartholomew admitted that “it was fun to watch” the first-year players “get out there … and create some problems for the other team.”

First-year winger Shira Cohen, who had been out for several games before coming back on Friday night, was particularly impressive, exploding with pace on the left side of the field and creating multiple chances in the box in the second half. However, NJIT’s goalie pulled off some impressive saves, preventing the Lions from capitalizing on any of Cohen’s chances.

First-year goalkeeper Liz Matei, and first-year midfielder Maddy McCaw, who, in her own words, “couldn’t have been better” in the NJIT game, had wonderful connections with Johnson and the rest of the defensive squad, keeping a clean sheet in front of the home fans. Getting their second shutout right before the start of the Ivies reminded the Lions of the importance and joy of playing good defense.

Johnson attributed Friday’s success to clean passes and touches between the defenders and the midfield, as well as the good pressure on offense. Johnson herself made multiple assertive tackles, and Matei held tight on all three of NJIT’s on-target shots.

The Lions dictated the pace of the game from the opening kick, as the defenders and midfield core surveyed the pitch, sending threatening through passes and long balls towards the opponent’s box. The constant effort of the Lions led to two goals: a flick shot over the NJIT keeper by Koe and a bomb by junior midfielder Cayla Davis from the Lions half, straight to the recently substituted-on junior forward Jordyn Geller. Geller fought past two defenders to put the ball dead-center in the net.

After an impressive offensive output in the first half, the Lions were unable to find the back of the net in the second portion. When asked about the goal discrepancy between the two halves, Bartholomew gave NJIT credit for playing hard to “get themselves back in the game,” and Johnson commented that the team needed to “improve [its] timing on the runs into the [opponent’s] box,” and “[maximize its] numbers in the box” to finish the bouncing ball.

Although this performance was certainly encouraging for the Lions’ chances in the Ivy League this season, the team is quick to not get too ahead of itself.

“The Ivy League across the board has been doing really well in soccer,” Bartholomew said. “We’re still taking it one game at a time and we talk about how each game gives us different things to deal with, attacking, defending, and what [we are] learning from the game.”