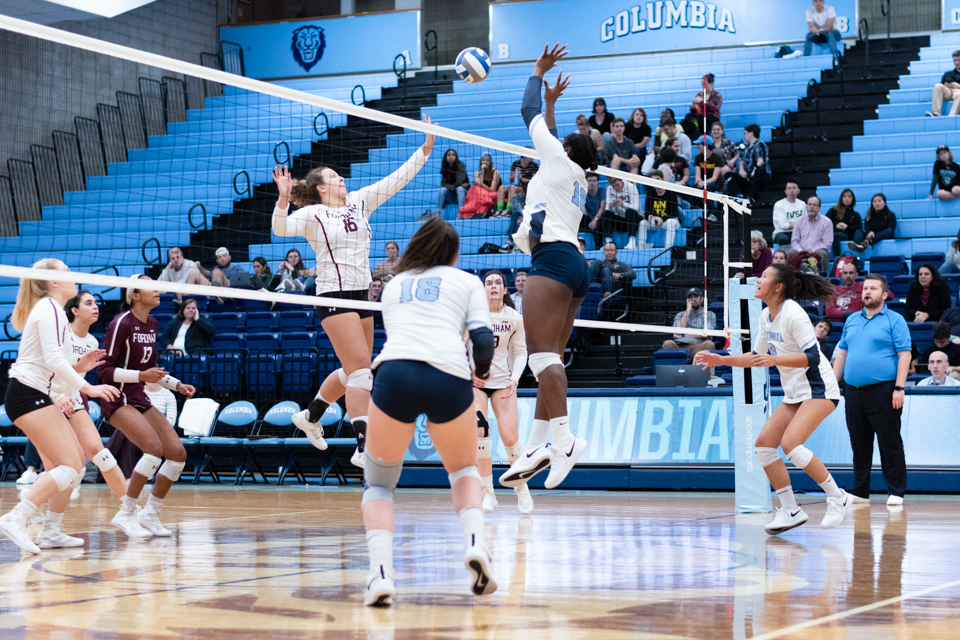 Chichi Ikwuazom has been the strongest offensive force this season for the Lions.

Columbia volleyball was swept 3-0 by Cornell in an error-filled Ivy opener. Despite a standout performance from senior middle blocker Chichi Ikwuazom, questions have been raised about the team’s depth.

Ikwuazom, named the Division I Sports Imports/AVCA Player of the Week, was typically dominant with a match-high 15 kills. She recorded a hitting percentage of .407 and was such a force that the Cornell players would cheer whenever their teammates managed to return her attacks. In response, the Columbia bench mimed bowing down to Ikwuazom whenever she successfully made a kill.

Ikwuazom accounted for most of Columbia’s offense. No other Lion recorded over three kills, and the team had a hitting percentage of only .125, averaging six attack errors a set. Without Ikwuazom, Columbia (7-4, 0-1 Ivy) hit an abysmal .015. First-year outside hitter Kiara Robichaud, the current Ivy League Rookie of the Week, recorded more errors than kills, as did sophomore outside hitter Emily Teehan.

In contrast, the Big Red (8-2, 1-0 Ivy) had six players hitting over a kill per set, and a team hitting percentage near .400. After this match, head coach Allison Keeley said the Lions needed to improve “everything.”

“We are working on our defense, and also on our offense,” Keeley said. “We hit almost negative against Cornell. … If you put the ball down and you serve well then you don’t have to talk about defense.”

It was errors that made the difference in the first set. The Light Blue was competitive and served much better than Cornell; the match was back and forth until the Big Red took advantage of attack errors by Columbia to explode in a 6-3 run at the end of the set, which Cornell won 25-21.

As the match continued, the defensive gap between the two teams became evident, with the Lions allowing higher and higher hitting percentages after each set. Cornell dominated the second set from the beginning with the help of five kills from its first-year outside hitter Joanna Chang, taking the set 25-16. The third set was also commanded by Cornell, 25-19.

Similar errors haunted Columbia in its 3-1 home loss to Stony Brook on Monday, Sept. 30. In the first two sets, 25-17 and 25-13 losses, Columbia had as many errors as points, recording five reception errors in the first set alone.

However, the team bounced back and played a much cleaner third set, forcing the Seawolves into seven attack errors and never trailing the 25-16 win. And despite a successful third set, the Lions dropped a contentious fourth set 26-24 to end the comeback attempt.

One attendee commented in the middle of the second set, after a rotation change took Ikwuazom off the court, “It’s like no Chichi, no points.”

Keeley said the team would keep looking to new first-years to step up after standout Robichaud hit poorly against Cornell and was “not available” against Stony Brook.

“They’re learning,” Keeley said of the first-years. “They’ll get there. We have some really good talent in our freshman group, they just haven’t had much time. … It takes at least a year to create a really good volleyball player, and so they’re learning and they’re getting some great opportunities, which is nice.”

Columbia will look to clinch its first Ivy win of the season when it takes on Princetonon Friday, Oct. 4. First serve is at 7 p.m.