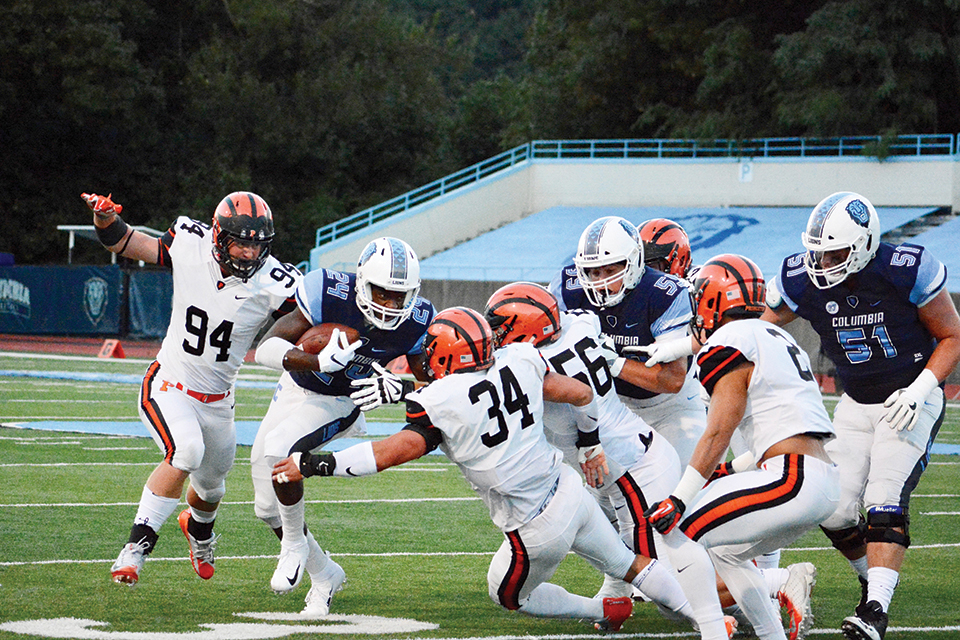 The Lions are looking to avenge last year’s 45-10 loss when they take on Princeton this Saturday.

Coming off a disappointing home debut in which Columbia lost to Georgetown 24-10, the Lions (1-1, 0-2 Ivy) are hoping to bounce back this weekend when they take on defending Ivy League Champion Princeton for the team’s first conference bout.

The matchup should test if this Lions team, which entered the 2019 season coming off of the most successful two-year stretch since joining the League in 1956, is truly a contender to win the league, or if the Light Blue will have to wait another year to compete for its first Ivy crown since 1961.

Princeton has been the class of Ivy League football over the past few years, winning two titles in the past three years, including an undefeated 2018 season. The Tigers’ success in the Ivy League last year included a dominant performance over the Lions, with Columbia falling 45-10.

In order to prevent a repeat of last year’s results, the Lions will need to be more successful at stopping the Tigers’ offense, which generated 540 yards, 360 on the ground alone, in last season’s contest.

For head coach Al Bagnoli, to stop a team like Princeton the Lions have to execute on all aspects of their game plan.

“We’ve got to go there and just make sure we do our strategic things right,” Bagnoli said. “It’s a combination of a lot of different things you’ve got to do to try to minimize, but they’re a talented offensive team, and we’ll have our hands full.”

In addition to improving its run defense against the Tigers, the Light Blue need to figure out how to slow down Princeton’s new quarterback, Kevin Davidson. After serving as a backup for the past three Ivy League Offensive Players of the Year, John Lovett (2016, 2018) and Cad Kanoff (2017), Davidson has taken full advantage of his first opportunity to start. In his first two games, Davidson averaged 361 yards through the air and thrown for nine touchdowns, including an Ivy League record seven in last week’s 56-23 rout of Bucknell.

Stopping Davidson will be crucial if Columbia is to win this game, and perhaps no defender will have more of a role here than senior cornerback Ben McKeighan, who had two interceptions in the Lions 28-24 victory over Princeton in 2017. While McKeighan recognizes that stopping while the Tigers’ potent air attack is a tall task, he’s more than up for the challenge.

“There’s no questioning how good they are on offense. Obviously they have a great scheme. They execute really well. But we talked about it in our meetings; I think we’re really talented in the defensive back room,” McKeighan said. “I think we have the talent to stay with them.”

On the offensive side of the ball, the Lion’s quarterbacks need to put up a better performance than they did last week against Georgetown. Quarterbacks junior Josh Bean and sophomore Ty Lenhart once again split time behind center, combining for five turnovers, including three in the fourth quarter by Bean. For Bagnoli, reducing turnovers is a top priority for the team heading into their first Ivy contest.

“We put such a premium on ball possession and security that I’m a little bit concerned, just based on seven turnovers in two games. That’s been the first thing that we’ve discussed,” Bagnoli said. “If we can’t get a handle on that, we’re going to be in big trouble. You can’t beat anybody turning the ball over that many times.”

After last week’s game, Bagnoli said that a contributing factor to the turnovers was the offensive line’s failure to hold up in protection. In Bagnoli’s eyes, a big reason for Columbia’s shaky pass blocking thus far has just been inconsistency in personnel.

“There’s been a lot of moving parts and a little bit more of collateral damage there than what we want, but that’s football, and we have to get the next guy ready,” Bagnoli said.

Fortunately for the Lions, this week marks the first game of the season with senior left guard Joe Scowden in the lineup after missing the first two games with an injury. Last season, Scowden started in seven games for a Lions team that obtained 19.0 sacks for 126 yards in 2018, the second-best record in school history.

While quality offensive line play makes a quarterback’s job easier, Bean has been sure not to shed blame for the rash of turnovers last week.

“[I] gotta be smart and do what I can to make smart decisions, not turn the ball over. Those are important plays, and you can’t have them back,” Bean said. “I just have to be smart with the ball and take care of it. Simple as that.”

If the Lions aren’t able to stop the Princeton passing attack, hold blocks long enough for Bean to make accurate reads, and hold onto the ball, their season may be over before it even begins.

The Lions will travel to Princeton to take on the defending Ivy League champion at 1 p.m. on Saturday. The game can be streamed live on ESPN+.