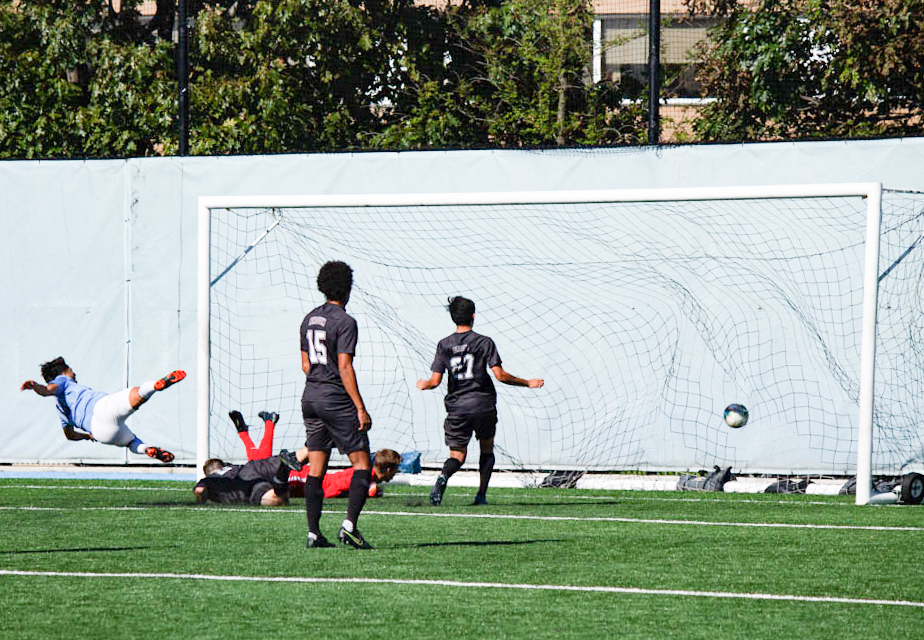 Men’s soccer walked away victorious from its first Ivy League match against Brown on Saturday 3-2, marking the third consecutive year that Columbia has won its Ivy opener.

This match was expected to be an easy win for the Light Blue, as Columbia defeated Brown 3-1 last season and the Bears were coming off three consecutive losses.

While the first half saw the Light Blue go up 2-0, Bears midfielder Daniel Schiller and defender Owen Schwartz threatened a comeback in the second half, with two goals that would have led to a tie if not for senior forward John Denis’s late penalty, which helped Columbia grab the crucial final point.

Columbia suffered heartbreak two seasons in a row when it came agonizingly close to clinching the Ancient Eight crown in 2018. However, head coach Kevin Anderson believes that the tumultuous game against Brown revealed why this season would be different.

Saturday afternoon showed that his faith in his players is not misplaced. Proving to be a formidable duo, first-year midfielder Uri Zeitz played the ball to Denis who outmaneuvered his defender to create an opening, gracefully curling the ball into the top right corner of the goal to open the scoring in the 12th minute.

The second goal came about in the minutes leading up to the end of the first half. Close to the centerline, Denis weaved skillfully between five defenders before chipping the ball to teammate and senior midfielder Matthew Swain over the Bear’s backline, which smashed it into the back of the net to increase Columbia’s lead to two goals.

Denis currently leads all Ivy League competitors with 13 points this season, with every goal scored worth 2 points and every assist worth 1 point. Having won the Ivy League in his first year at Columbia in 2016, Denis understands what it takes to claim the crown and believes that this season will be the one that the Lions do so.

“I think it’s just two things. I see the same passion, hunger, and then just the quality we had my freshman year. I think that we’re ready to make that step,” he said. “ Hopefully we can be champions. That’s our goal and has always been our goal.”

When asked about the reason for the team’s lapse in defense in the second half, Anderson said, “When teams feel as though they have something to lose, sometimes they can’t perform. It’s a moment of a lack of production or lack of efficiency. And I think that’s what took place.”

Junior captain and defender Blake Willis said that the two Brown goals came about due to a “couple of [defensive] errors” and acknowledged that the team needs to “improve a lot more.” However, like Denis, he envisions a different ending this season.

“Defensively we’re working on our chemistry a lot more. We’re starting to communicate a lot more. We haven’t started as well as we did last year but we’re developing and getting there so I think we can finish strong,” he said.

Columbia hopes to build on this promising start next Sunday, Oct. 13, when it hosts Penn. Kickoff will take place at 1 p.m. at Rocco B. Commisso Soccer Stadium.