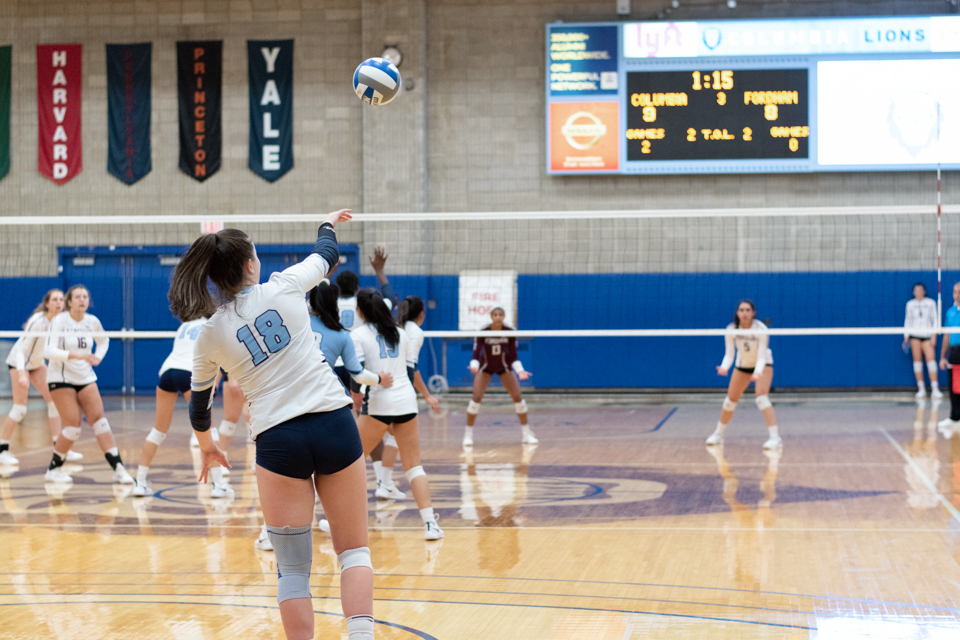 VB: Sophomore outside hitter Emily Teehan recorded a double-double with 18 kills, 10 digs, ​and a season-high 20.5 points in the Lions’ loss to Princeton.

Columbia volleyball split its matches this weekend, picking up its first Ivy win of the season to break a three-game losing streak. The Lions avoided a sweep in their Friday four-set loss to Princeton, winning a set against the Tigers for the first time in two years, and then beat Penn 3-1 on Saturday for their first conference win this year.

Friday’s game was a step up from last weekend’s disappointing losses to Cornell and Stony Brook when the only Lion who played well was superstar senior middle blocker Chichi Ikwuazom. Against Princeton, sophomore outside hitter Emily Teehan recorded a double-double with 10 digs and season-highs of 18 kills and 20.5 points; junior setter Audrey Cheng averaged nearly 11 assists per set, andIkwuazom made24 kills. However, Columbia (8-5, 1-2 Ivy) could not overcome the offensive depth of Princeton (6-6, 2-1 Ivy), which is projected to win the Ivy League this year.

In the first three sets, Princeton, the 2017 Ivy League Champions, and Columbia, which only won five conference games in 2017, looked evenly matched. The Lions gained a six-point lead early in the first set off impressive kills from Teehan and Ikwuazom, the latter making 8 kills. However, the Tigers pushed back and forced attack errors, going on an outrageous 14-3 run in the second half of the set to win it 25-19.

The Lions finished stronger in the second and third sets. The team’s 25-22 win in the second broke a two-year streak of no set losses against Princeton. Columbia hit .367, and Ikwuazom and Teehan put down six kills each. Coach Allison Keeley said Teehan, who made the second team All-Ivy League last year, is successfully coming back from injury.

“She hit the ball excellent,” Keeley said. “[Teehan] has been rebounding from an injury, and she’s just on the upswing. So she’s getting stronger, she’s able to train more, she’s getting back into her natural form. And she is a very good hitter.”

In the third, the Lions dropped a tight set 26-24 in overtime. But after Princeton pulled ahead, Columbia did not just roll over. The Lions earned their 21st point after an extended rally set Teehan up for a solid kill. Then, with the game tied at 21, Cheng leaped up and delivered her serve directly into the net, sending the Tigers into cheers. Keeley said she felt the serve was an uncharacteristic error and a turning point in the match.

“If we had served in, I thought we might have had a chance at the game,” Keeley said. “We missed some key serves. But in general, our service was consistent and aggressive and kept us in the match.”

However, the Lions were out-served in the fourth, deciding set, with one reception error and one service error. Columbia’s passing broke down and Princeton once again ran away at the end, this time with a 10-1 run energized by star middle blocker Maggie O’Connell, who hit almost .500 off the Lions. Keeley said the team’s young defenders will continue to work on blocking slide hitters like O’Connell.

“One of our challenges is our defense against the right side, against that slide,” Keeley said. “That’s a really difficult play to block, and we have a freshman and a sophomore trying to do that on that side of the net, and their best players were over there as well. So I think that’s one of the key things we need to work on.”

In Saturday’s 3-1 win against the Quakers, Teehan and Ikwuazom were difference-makers again, combining for 33 kills while Cheng led the Lions’ offense with 11 assists per set. However, the team’s first conference win of the season involved more than just output from its stars, as first-years were critical on offense to push the Lions over the top.

For the first time this season, the Lions had six players with five kills or more—and half of them were underclassmen. First-year outside hitter Pierce Woodall put down six kills, while first-year middle blocker Soah Franklin recorded five, helping the Lions earn their best team hitting percentage this year. After the Princeton game, Keeley said this was a week of “big gains” for the younger players on the team.

“It’s pretty hard for freshmen to learn everything and compete with that information at the same time,” Keely said. “But … they executed. Our block was better, we swung really aggressively from the outside, our defense was much better. Everything we talked about they really implemented. So I think we got over the hump with some of the things.”

The Lions will return home on Friday, Oct. 11, when they take on Harvard at Levien Gym. First serve is at 7 p.m.