Women’s soccer fails to score in 2-0 loss against No. 11 Brown

Women’s soccer fails to score in 2-0 loss against No. 11 Brown 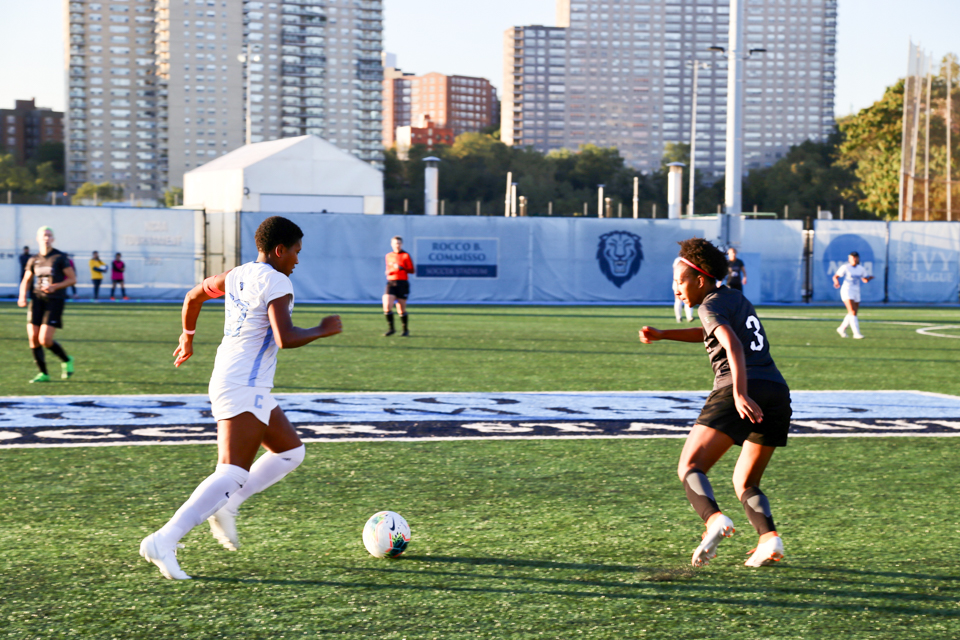 Senior defender Amalya Johnson pledged to “take it to the rest of the conference” after the Lions’ loss to Brown.

Despite fighting until the end in front of the home fans on Alumnae Day, the Columbia women’s soccer team failed to score on Saturday evening against Brown, and could not capture its second Ivy League victory of the season. This loss marks the first time in a decade that the Light Blue has lost to Brown. The Bears, who now lead the league with six points, scored twice on the day for its win.

First-year goalkeeper Liz Matei conceded her first goal in three weeks as Brown’s athletic frontline found success against what has been a formidable Lions defense. Although Columbia (6-3-1) started the game out strong, pressuring Brown’s defense multiple times, it couldn’t keep the momentum going in the last 20 minutes of the first half, and a costly turnover gave Brown (8-1-1) its first goal in the 33rd minute. Columbia controlled the ball 59 percent of the time, but being down by a goal for the majority of the match made its defense susceptible to counter attacks by Brown, which took seven shots on goal despite losing the possession battle.

Coach Tracey Bartholomew was frustrated by the results of the game.

“We kind of veered off a couple of moments in our game plan and ... in this conference when you—the hardest part is you make a mistake and you can get scored on,” she said.

While the Lions’ defense played well for the majority of the game, Brown’s nimble forwards took advantage of a few small mistakes that proved to be the difference in the match. Brown forward Brittany Raphino, who had already scored three goals this season, scored the first goal against Columbia on Saturday. After the game, Bartholomew called Raphino “a handful” for the Lions’ backline.

The Bears’ lockdown defense also frustrated the Lions. Brown has admitted fewer goals than any other team in the Ivy League this season, and its goalie Kayla Thompson ranks first in the league with a .931 save percentage. The Lions hardly threatened Thompson, in part because Columbia’s offense was oftentimes stifled by defenders outside of the box, and it showed in the box score as the Lions finished with only three shots on goal. With 23 minutes left in the competition, the team nearly broke through when junior forward Jordyn Geller attacked the box and connected with junior midfielder Cayla Davis, who found the back of the net, but the goal was quickly called off by the referee for goalkeeper interference.

Bartholomew was not happy about the decision and said that the “kids worked too hard for the moment to be decided on a referee’s terrible call.” Instead of a tie game, the Light Blue had to sacrifice its defense even more in its attempt to get the equalizer it needed to salvage a point in the Ivy League standings.

Senior defender Amalya Johnson was also disappointed by the call, but she saw it as a sign that “[the team] could get [the ball] in the back of the net” against strong teams like Brown. Although the team would love to have won the game, Saturday’s match gave the Lions a renewed focus, and they pledged to “take it to the rest of the conference.”

First-year forward Ally Clark also had a chance to tie the game in the 76th minute. Clark dribbled past Brown’s goalie and nearly scored, only to have it cleared off the goal line at the last moment. Brown’s victory was set in stone when forward Zoe Maxwell finessed the ball into Columbia’s top left corner.

Columbia fans were saddened by the defeat but cheered the Lions on as they came to the stands to thank the fans.

“When the girls go [to] the center circle, the first thing they talk about is how [they] have to learn from this and [they] need to respond, and that’s sort of the culture of who they are and so we’ve got to turn around and get ourselves recovered,” Bartholomew said after Saturday night’s loss.