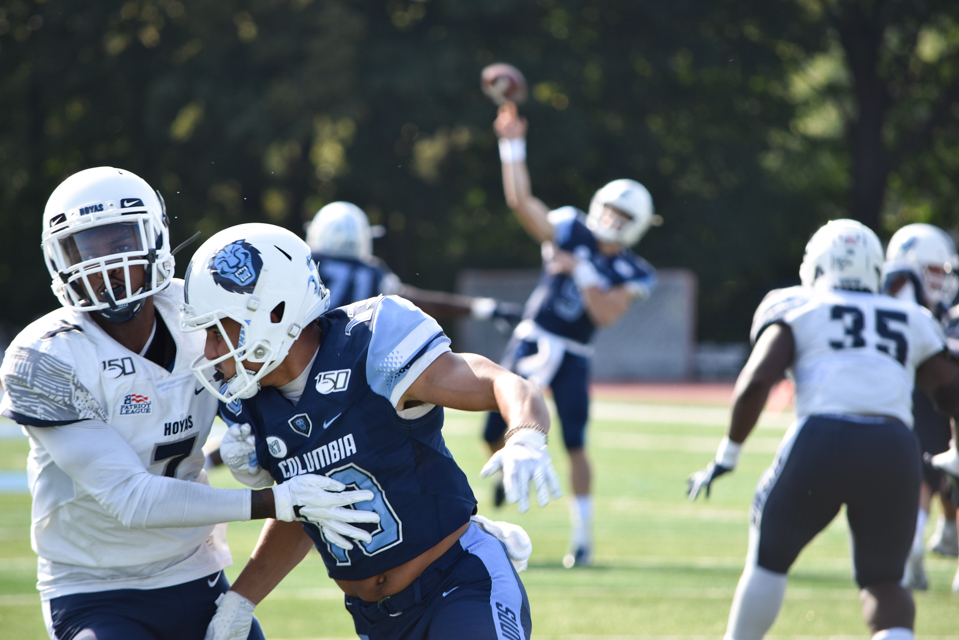 For the first time since 2016, the Lions have a losing record.

Three games into the season, Columbia football has found itself in a precarious position. The Lions are under .500 for the first time since 2016. The offense has been held to just 10 points in two straight games. The team is losing the turnover battle by a margin of 7-3. And yet, heading into their week 4 matchup against the Central Connecticut Blue Devils, the Lions maintain the same sense of optimism they hadhad before the season began.

Coming off a disappointing Ivy opener against Princeton, the Lions (1-2, 0-1 Ivy) hope that playing an opponent they beat 41-24 in 2018 can get them back on track before finishing off the season with seven straight games against Ivy League opponents.

The Light Blue put up an impressive performance in last year’s matchup, including three forced turnovers inside the Blue Devils’ 20-yard line, but the game is better remembered for the devastating injuries that Columbia suffered.

Senior wide receiver Josh Wainwright entered last year’s matchup coming off of a season during which he broke the record for most receiving yards in a season by a Columbia receiver with 1,001, a performance that earned him first-team All-Ivy League honors. After a quarter and a half of play, Wainwright’s stellar play, with four catches for 46 yards and a 50-yard punt return, inspired hope for another strong season. But then, Wainwright tore his ACL in the second quarter, effectively ending his season before it had truly begun.

Additionally, that game marked the start of the Light Blue’s revolving door at the quarterback position, as then-sophomore quarterback Josh Bean took two damaging hits to the head, resulting in a concussion and his removal from the game. The concussion was the beginning of Bean’s injury-plagued season, during which he only played four games.

This season, Bean and Wainwright are both healthy and are major components of the game plan, as the Lions look to repeat the success they had against the Blue Devils last season.

For Columbia to beat Central Connecticut, the offense must have a stronger presence on the field than it has had for the past two weeks. Columbia has been held to 10 points in two consecutive games in itsits 24-10 loss to Georgetown on Sept. 288 and its 21-10 Ivy League opener against Princeton on Oct. 5.

Head coach Al Bagnoli says the team has to find a way to be more balanced on offense, but that this task remains a challenge forfor an offensive line that is struggling to find quality play.

“We‘ve got to be a more balanced offense;; we’ve got to be able to figure out ways to run the ball better than what we have. It’s a combination of a lot of things,, but really,, it starts upfront,,” Bagnoli said. “I’m cautiously optimistic it’s getting better, that the game is slowing down a little bit for some of the younger kids. We’ll see whether or not I’m accurate.”

One noticeable difference on Lions’ Lions’ offense in last week’s game was the reduced role of sophomore quarterback Ty Lenhart. After throwing 16 passes and running the ball 11 times in the first two weeks, Lenhart threw only one pass against Princeton, which went for five yards, and ran the ball a season-low of three times. Bagnoli says that Lenhart’s reduced time on the field was a reflection of his plan against Princeton, and that the quarterback position will continue to change depending on the opponent.

“It varies from week to week,” Bagnoli said. “A lot of it depends on what we’re trying to do and how we’re going to try to orchestrate the game,, so that was kind of the game plan for Princeton.”

AAgainst Princeton, the Light Blue put up a solid defensive performance for the first three quarters before surrendering a few big plays in the last frame. One of the defensive stars on the day was senior safety Ben Matheismeier, who finished with 10 tackles and an interception. Despite his strong performance, a disappointed Matheismeier promised to “move on to the next one and continue to grow as a defensive back unit.”

Bagnoli was more complimentary of his defense than Matheismeier, saying, “Defensively, I’m not sure we could ask for much more.”

This week, the Lions will aspire to produce a similar defensive performance against Central Connecticut to contend with a high-powered offense led by the threatening duo of quarterback Aaron Winchester and top receiver Tyshaun James. James earned the title of Northeast Conference offensive player of the week for his performance in Central Connecticut’s loss to Eastern Michigan, when he racked up 118 yards and two touchdowns. Bagnoli believes Winchester will provide the Blue Devils with a quality they didn’t have when the two teams squared off last season.

“That’s the X factor. He makes a lot of plays that aren’t necessarily blocked well or scripted well. His ability to extend plays, be a factor on quarterback keeps, scramble out of the pocket, have designated runs, has given them an element they didn’t have last year,” Bagnoli said. “That’s what scares you. You could have a lot of things covered and then he’s going to find some way to escape.”

The Lions will look to shut down Winchester and the rest of Central Connecticut’soffense when they play at Wien Stadium this Saturday at 1 p.m.