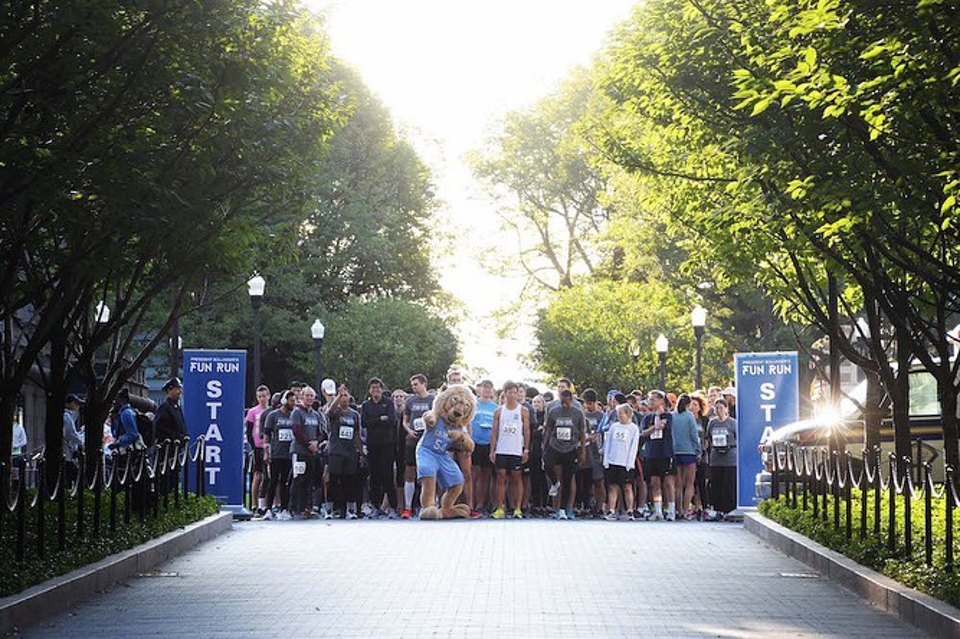 President Bollinger's Fun Run is in its 18th year.

This was not what College Walk is supposed to look like at 8:15 a.m. on a Friday. The crowd, led by Roar-ee, bounced lightly on the balls of their feet. Some chugged water, others chatted with friends, but a few were laser-focused, headphones in. The buzz of anticipation that encompassed campus on Friday was all for President Lee Bollinger’s 18th annual Fun Run.

While Bollinger is always the big draw, the event is actually a collaboration between the Office of the President, Columbia Athletics, and the Columbia Alumni Association. Members of the track and cross country teams lined the roads to cheer on members of the Columbia community as they embarked on their 5-kilometer journey. Most participants had smiles on their faces as they gathered at the starting line, despite the crisp 55-degree morning and alarm-shattering 8:15 a.m. start time.

For Grace Bertelli, CC ’21, the Fun Run is what kickstarted her relationship with running in college.

“I didn’t want to make a fool out of myself,” Bertelli said. “And so I ran every day and really started to love it, and I eventually ran a marathon the next year. ... It was crazy that it was all because of PrezBo’s Fun Run.”

This year marks Bertelli’s third time running in the event. She ran sub-seven minute miles, she said, and finished in 21 minutes, 8 seconds.

“I’m really grateful for the track team and the cross country team for helping out and cheering us on,” she said. “I think that made me want to go a lot faster.”

The women’s cross country team competed later that morning at Van Cortlandt Park, 126 streets north of the Riverside Park finish line where they had earlier that morning supported their peers. But the atmosphere of the Bronx meet was very different from that of the boisterous Fun Run. Though Bertelli said she attends football games and other sporting events, she noted that Bollinger’s annual 5k draws considerably more school spirit than most varsity athletics.

“I guess [because] it’s on campus,” Bertelli said, although she added that Columbia students’ competitive sides seem to be drawn out by the Fun Run as well. “What I love about this is that it’s financially accessible to everyone. It’s free to run it, [a] great workout. This is definitely one of the few traditions we have.”

Like Bertelli, Blessing Utomi, CC ’22, cited the Fun Run as a “tradition that everyone is going to want to come out to.” Utomi believes that the same enthusiasm should extend to athletics, but he is unconvinced that other students feel the same. While he plans on attending more football games this fall, Utomi said that their frequency diminishes the motivation to go. And as Bertelli noted, Baker Athletic Complex is housed on 218th Street. Getting there is a trek students tend to be unwilling to make, despite the free shuttle buses that depart to and from campus on game days.

“People should still go out to games, of course, but [the Fun Run], it’s such a big hyped-up event that a lot of people will come out,” Utomi said.

Part of that hype is due to its high-profile participants. Racers craned their necks throughout the race searching for a glimpse of their president. People discussed where they passed him or whether they had seen him at all. Even after runners finished the race and rejuvenated, they stuck around to watch Bollinger finish.

But Bollinger isn’t the only draw. The Fun Run is a rare opportunity for all members of the Columbia community to come together in a non-academic setting. Students, faculty, alumni, and other administrators all take to the pavement for the event. While waiting for a glance of Bollinger, Bertelli spotted other familiar faces: “Is that Jason?” she asked incredulously. “That’s my admissions officer! I have to scream.”

“I got to see all the people I walk around and talk to on a daily basis just actually out here getting it done,” Jonathan Marty, SEAS ’23, said.

Utomi even credited the crowd for some of his speed.

“It was the fastest time I’ve run. I think just being part of the group with people kind of helps motivate you,” Utomi said. “It was really nice.”

Runners make a loop on West 95th Street before making their way back up to 116th Street. It’s a familiar route for many of the participants, including Utomi and Bertelli, who utilize Riverside Park in their daily workouts. While the Fun Run brings out a lot of experienced runners, the event is by no means limited to ex-athletes. Joggers and walkers are equally as prevalent. Many Columbia organizations participate as a group; some wear matching T-shirts.

“It really brings out the whole community, from students to admissions officers,” Bertelli said.

Accessibility may contribute to the draw of the event. But there is another key component of the Fun Run that keeps students returning. And it’s not the free T-shirts.

“There’s PrezBo!” The call rang out among those who’d stayed behind in order to catch a glimpse of the man himself. The enthusiasm that permeated the air was of the same brand often-absent from Baker’s student section. With bated breath, the crowd funneled tightly together near the finish line for a better view. And there he was, a shock of white hair flanked by an entourage. Everyone cheered as he finished, a reminder that the title of the run wasn’t just for publicity’s sake: It really was Bollinger’s race.