Field hockey falls to No. 7 Princeton 1-8 in blowout loss

Field hockey falls to No. 7 Princeton 1-8 in blowout loss 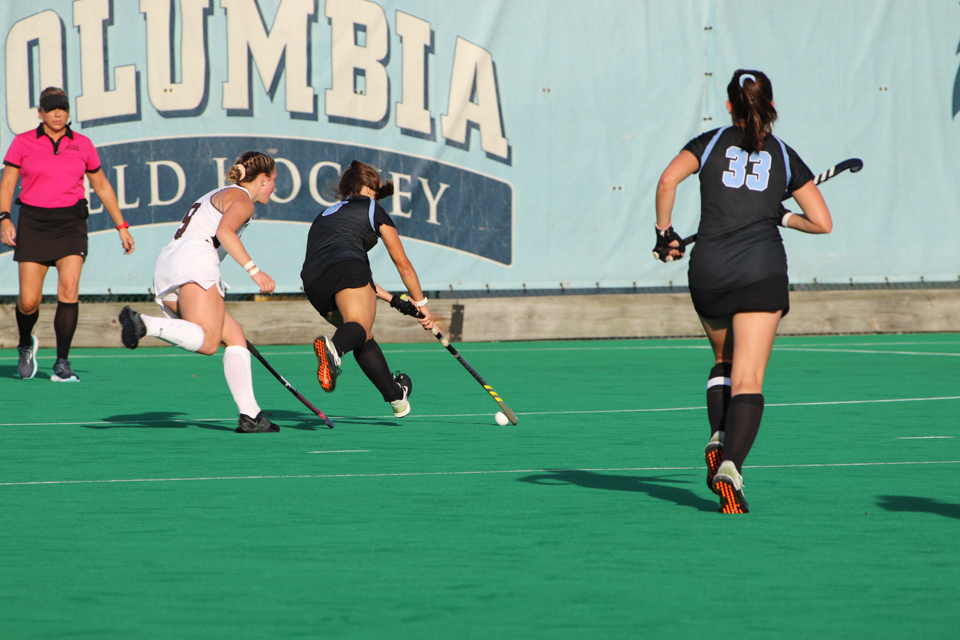 After Saturday’s 8-1 loss to Princeton, Columbia field hockey fell to a 1-22 all-time record against the Tigers.

In an away game on Saturday, the No. 7 Tigers dismantled the Lions 8-1 in a dominant performance that began in just the first 15 minutes of the match.

Princeton’s Claire Donovan and Ali McCarthy notched goals in the seventh and 14th minutes of the first quarter to give the Tigers (8-4, 3-0 Ivy) a lead they would not relinquish for the rest of the match.

The Light Blue (5-6, 1-2 Ivy) also broke through in the first quarter. Junior midfielder Kelsey Farkas scored off of a corner, finding the back of the net from an assist from senior midfielder Jennifer Trieschman.

Following Farkas’s strike, the Lions fell silent as Princeton scored six unanswered goals, adding three in the second quarter and three in the last ten minutes of the game.

“They did a really nice job converting the opportunities they had,” she said. “We could have done a better job with our own opportunities.”

Historically, Columbia has struggled mightily against Princeton, posting an overall record of 1-22, with its only victory coming in 2014.

Princeton has been an electric force this fall, entering the contest against Columbia on a four-game winning streak that included a victory over No. 2 Duke and a shutout of No. 11 Delaware.

The Tigers have scored the most goals in the Ivy League at 38, and their most consistent scorers, Clara Roth, Hannah Davey, and Sammy Popper, occupy the top three spots on the Ivy scoring leaderboard. Together, they overwhelmed the Light Blue’s defense, which allowed 26 shots, 17 on goal, on Saturday.

Although junior goalkeeper Alexa Conomikes contributed nine saves, her second-highest tally all season, the Tigers continued to find holes in Columbia’s defense. Despite the lackluster results, Nichols is hopeful that the team can bounce back from Saturday’s loss.

“It starts by asking our athletes to train harder in our defensive effort, … taking an ‘intercept’ mentality,” Nicols said.

The Lions’ one goal marked the second weekend in a row during which Farkas scored the group’s lone goal. Her strike on Saturday brought her season total to six, the highest on the team.

“Bringing the team together, asking the team to perform as a whole… There are individual areas to improve on, but at the end of the day, we need the team firing on all cylinders,” Nicols stressed, highlighting a need for consistency in the group’s efforts.

Columbia will face off against Penn on Friday at the Baker Athletic Complex. Play begins at 6 p.m.