“Ready to tear it up”: Confident underclassmen lead volleyball to perfect homestand

“Ready to tear it up”: Confident underclassmen lead volleyball to perfect homestand 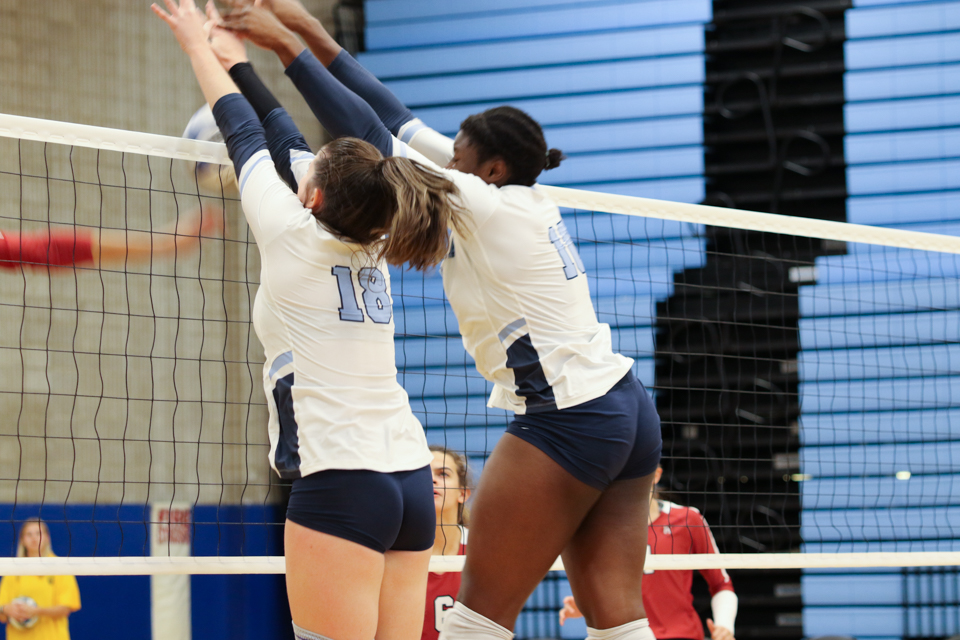 After registering its first Ivy win last weekend, Columbia volleyball knew replicating those results at this weekend’s homestand would be pivotal to its success this season. The Lions rose to the challenge, sweeping a struggling Harvard team 3-0 on Friday. The Light Blue continued its streak the next day, dominating the Ivy League’s best defense with a 3-1 win over Dartmouth on Saturday.

While young players faltered against Cornell and Stony Brook last week, the underclassmen rose to the occasion this weekend to deliver the wins to Columbia (10-5, 3-2 Ivy). Sophomore outside hitter Emily Teehan, who dominated last season before suffering an injury, put down 28 kills over the two games and ran the offense when star senior middle blocker Chichi Ikwuazom was off the court. In addition, first-year outside hitter Pierce Woodall had a breakout weekend, recording season-highs in kills, blocks, digs, and points.

In Friday’s sweep of Harvard (3-11, 1-4 Ivy), the Lions’ defense shined. The Light Blue recorded seven blocks in the first set alone, dominating the battle at the net to snatch a 25-23 victory. In the second set, Columbia allowed only nine kills, resulting in a 25-20 win. In the third, a rattled Harvard team put down seven attack errors and four service errors, letting Columbia finish powerfully and control the set 25-15.

Throughout the game, they out-dug the Crimson 47-28, and held Harvard to a .099 hitting percentage, well below their season average of .201. Coach Allison Keeley called it Columbia’s best defensive effort of the year.

“Last [week], we were working on everything,” Keely said. “Our serving improved a ton, our passing improved, and we did a lot of work both on defense and hitting. … That’s the best defensive game that we’ve had.”

Ikwuazom, one of the nation’s best offensive players, didn’t dominate Friday’s game; her 14 kills were her lowest total of the season. Instead, first-years combined for 15 against Harvard, powering the Lions over the top. In addition, senior libero Kalie Wood put down four aces, leading the match.

This ability to run the offense through a number of different players was crucial again in Saturday’s 3-1 triumph over Dartmouth (5-9, 1-4 Ivy). The Big Green, which leads the league in blocks and digs per set, put its impressive defense on display against Columbia..

“They’re really a good blocking team, and they stopped Chichi,” Keeley said. “We had kind of been running the Chichi show out there, so we spread the ball around to our pins a little bit, and our first years really stepped up and did a great job. Emily Teehan had a really nice night too, she carried a lot of the weight for us.”

In addition to Teehan’s big night, Woodall stepped up on Saturday. With her mother, a Columbia alumna and volleyball player herself, in the stands for Alumni Night, Woodall finished third on the team in points to capture her third consecutive game of five kills or more. Those games have been Columbia’s first, second, and third Ivy wins of the season.

“[Woodall] just has to play with a lot of courage,” Keeley said. “She has a big arm and if she plays with confidence she can hit us through the back half of that rotation.”

The Lions set the tone in the first set with a 25-20 victory powered by their outstanding .382 hitting percentage. In the second, despite out-hitting the Big Green again, Columbia was done in by six service errors, dropping the set 25-23. However, the Lions recovered to control the last two sets.

“They referred back to the Harvard game, and knew that they were capable of playing better,” Keeley said. “They had that confidence in them, because they’ve done it before.”

After the second set loss, Columbia held Dartmouth to a negative hitting percentage in the third, a long grind to a 25-22 win where the teams combined for nearly 100 attack attempts. In the fourth set, the Lions found a faster pace to record a 25-22 win. For Woodall, the key to coming back was relentlessness and confidence.

“They’re great defenders, can’t take that away from them,” Woodall said, “But they’ve got holes, and we knew where they were. We were very prepared, and we just went after them.”

The Lions will look to earn their fourth Ivy victory of the year, which would match their total from the entirety of last season, on Friday, Oct. 18 against 2018 Ivy League Champion Yale. Standout first-year outside hitter Kiara Robichaud, who has been out for two weeks with an ankle injury, is slated to return. First serve is at 7 p.m in New Haven.