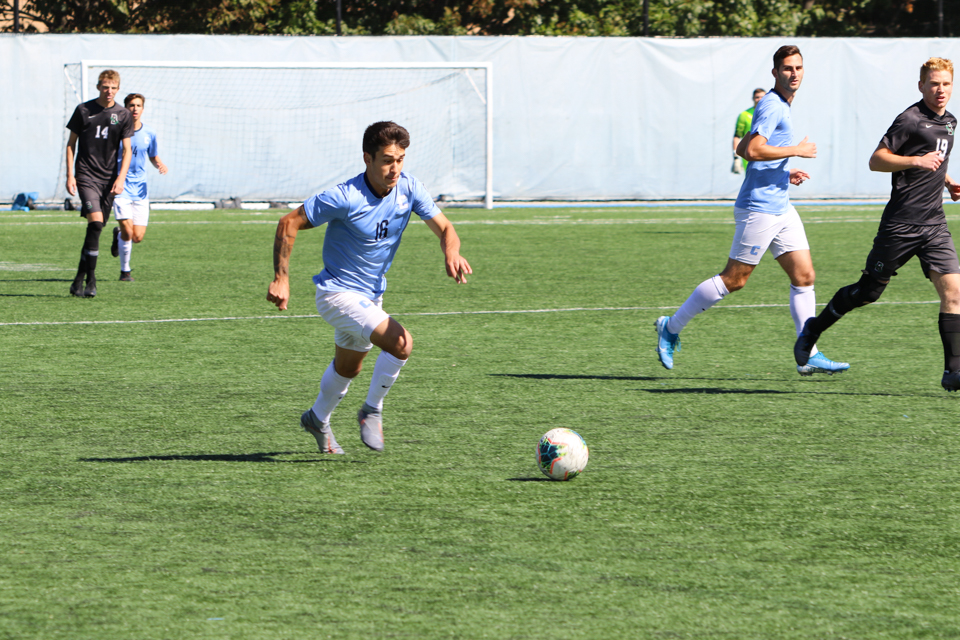 On Sunday afternoon, men’s soccer battled Penn in a bid to earn the top spot of the table. However, neither side secured the victory as the game finished in a 1-1 draw after a stagnant double overtime. This marks the second-longest goal-scoring streak in Columbia men’s soccer history of 17 matches. The longest streak was a 24-game stretch in the 1979 season.

In current Ivy League rankings, the Lions (3-4-3, 1-0-1 Ivy) share the number two spot with the Quakers (4-3-2, 1-0-1 Ivy), both having won their Ivy openers against Brown and Cornell respectively. The match-up on Sunday provided both teams the opportunity to snatch the three points required to join Yale, which sits at number one as the only undefeated team in the Ivy League.

The Light Blue went into Sunday’s game looking to make up for last week’s loss to Binghamton. Columbia took a dominant stance on the field as senior forward John Denis raced down the far left side before playing the ball into the penalty area where junior forward Avi Eller was able to get a foot on it in front of the goal before being denied by the Penn goalkeeper Dane Jacomen. However, Jacomen was unable to get a firm grip on the ball, and it fell to the dangerous feet of first-year midfielder Uri Zeitz, who smashed it into the back of the net, putting Columbia in the lead 1-0 within the first 40 seconds of the game. This is the second time Zeitz has scored a goal in the opening minute of the game this season after securing an early lead against Monmouth.

Penn did not stay quiet for long as the Quakers sunk the equalizer in the 11th minute. Penn’s Joey Bhangdia slipped past Columbia’s defense to receive the ball lobbed over the Lions’ backline by Jake Kohlbrenner, which he neatly slotted into the bottom corner of the goal for the tying goal. After the early action, the game’s pace slowed down as both teams struggled to get past their opponent’s defense.

The first half saw Columbia dominate offensively with a tally of seven shots on target compared to Penn’s three, although Penn maintained an advantage in time of possession. However,neither side was able to capitalize on its advantages to secure a second goal. The second half saw more of the same back and forth between the teams, with neither being able to deliver the final stroke. The two 10 minute overtimes were no different, ending the game in a tie, 1-1.

Men’s soccer will continue Ivy play next Saturday, Oct. 19, when it goes on the road to play Princeton. Kickoff will take place at 1 p.m. at Roberts Stadium.