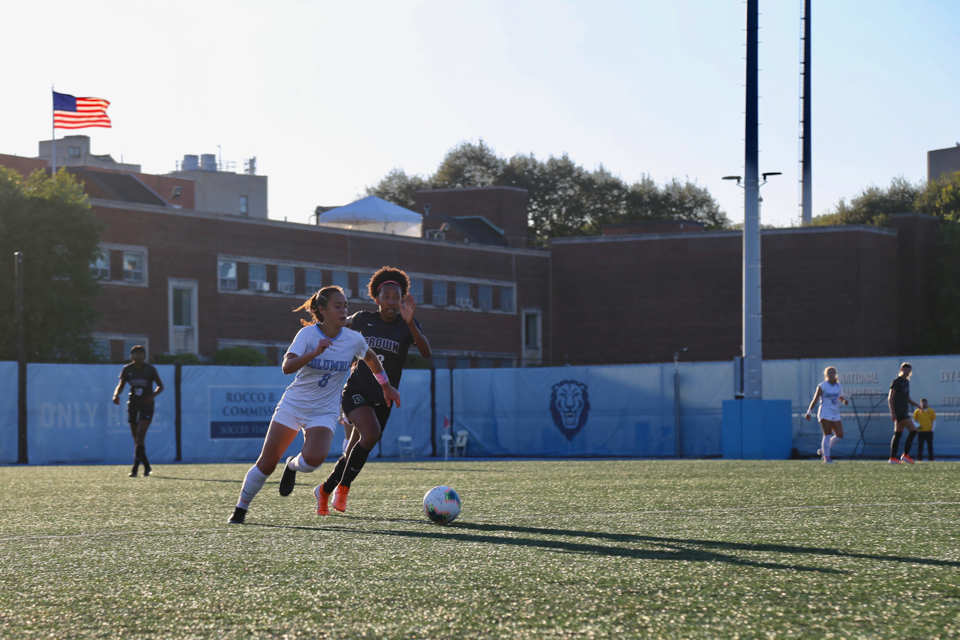 Columbia women's soccer bounced back from last week's loss to Brown with wins against Bucknell and Penn.

After losing to Brown last week, Columbia women’s soccer team bounced back on Tuesday in a thrilling 2-1 overtime win against Bucknell and continued its strong run of play with Saturday night’s one-goal victory over Penn. With a season total of six points, the Lions are now tied with Yale at third in the Ivy League rankings.

With Saturday’s win, the Lions (8-3-1, 2-1 Ivy) have already matched last season’s win total, and are on their best start since 2008. The loss against Brown (9-1-1, 3-0 Ivy) seemed to rattle the Lions’ confidence, but after winning against Penn, head coach Tracey Bartholomew noted that the leadership on the team was a key component in helping the team bounce back after their less-than-stellar performance.

This past week served as a manifestation of the team’s drive and grit. Columbia showed resilience in the tight match at Bucknell when junior midfielder Gracie Wall scored a last-second putback goal off of a missed penalty kick. Wall found the back of the net again in the 75th minute against Penn. While those were the only two goals Wall has scored so far in the season, both were valuable game-winners that lifted the Lions’ standing after last week’s disappointing finish.

“She’s so smart getting to that ball so fast,” Bartholomew said.

The Lions started out dominating in time of possession and pressured Penn’s defense for the majority of the game. The Light Blue took 15 shots in total, forcing Penn’s goalkeeper Kitty Qu, who came into the game leading the Ivy League with 46 saves, to stop seven shots. In the first half, the offense flowed through the right side, with the deadly combination of senior defender Amalya Johnson and first-year forward Shira Cohen, who also scored with a chip shot on Tuesday. Penn’s left-back Jadyn Wilensky had to play physically throughout the game in order to limit the Lions’ Cohen. Sophomore forward Mallaika Tomar continued to jab at Wilensky after she subbed in, and drew “oohs” from the crowd as she left Wilensky in the dust with a perfect first-touch turn and go.

While the excitement did not translate into many goals for the Lions, Bartholomew was pleased with the team’s effort.

“That rhythm is there,” Bartholomew said. “I thought we did a really good job.”

The start of the second half came with a renewed effort by junior forward Jordyn Geller, who was determined to score a goal for the Lions after her assist to junior midfielder Cayla Davis last Saturday was called off. Through balls and crosses to Geller gave her four chances at a goal, her finish was slightly off each time. Bartholomew thought it “would have been nice to be up two nothing,” but she was delighted to see that Geller had “that mindset to take those chances [at goal].”

When asked whether she would score the next game, Geller light-heartedly promised: “take [today’s missed chances] and fuel myself next game against Princeton.”

Unlike the Lions’ clear chances at the start of the game, Wall’s goal came out of nowhere. Sophomore midfielder Jessica Schildkraut got her fifth assist of the season with a long pass into the box from a free kick near the midfield line. A miscommunication by Penn’s defense let the ball drop right in front of Wall, who seized the opportunity by heading the ball past the goalie.

Penn attempted to retaliate in the last 15 minutes of the second half, but the Lions, despite giving the Quakers multiple chances to tie the game, held their ground to secure the three points. Bartholomew just wanted to remind the Lions that even in this win “they have moments they gotta work on,” and with this “learning approach” in mind, the team could go far.

The win brought women’s soccer one step closer to its goal of achieving the first 10-win season of the decade, which has been the team’s goal for quite some time. “This started last year,” Bartholomew said. “This started out after the season, you know, our program just driving and we believed we were capable of a 10 win season.”