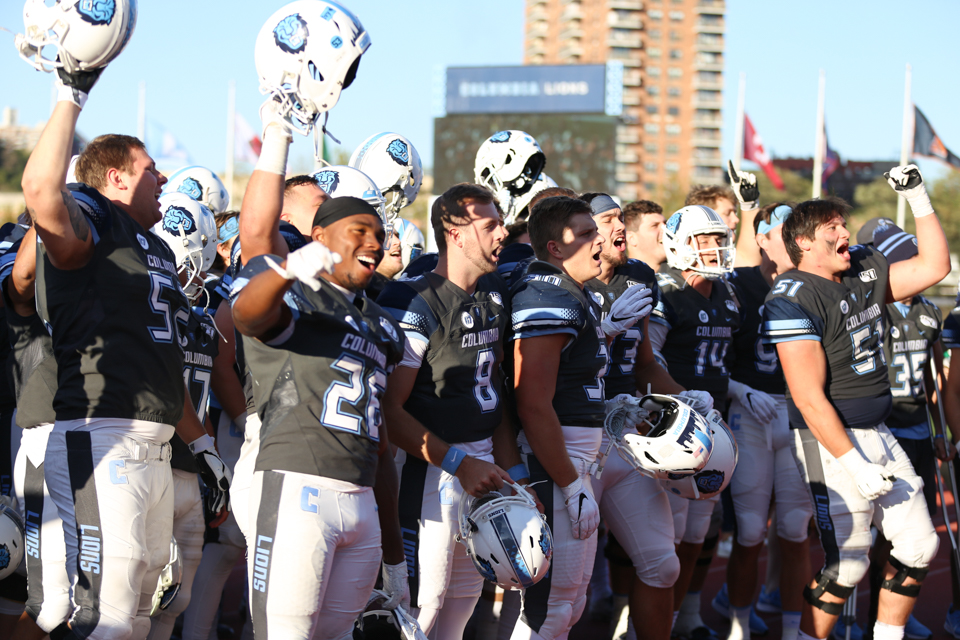 This is the second time the Light Blue has defeated Penn since 1997.

After three straight losses, football reclaimed an offensive prowess it has lacked all season, dominating on both sides of the ball en route to a 44-6 blowout Homecoming victory over Penn on Saturday at Wien Stadium.

This triumph was the largest Homecoming win for the Lions in the program’s 149-year history. In addition, this is the second time the Light Blue has defeated Penn since 1997—the first was its 2017 Homecoming victory, with a final score of 34-31. The Lions’ 2018 matchup against Penn was held at 13-10 with neither side able to score a second touchdown. For senior cornerback Ben McKeighan, who was playing his last Homecoming game, getting the win in front of a packed crowd made the victory more meaningful.

“It’s huge, especially to win at home, because we haven’t won at home yet this year and that was our big thing this week, was protecting our house,” McKeighan said. “So just to get a win ... in an Ivy League game, in a home game, in a Homecoming game—it’s really important.”

While Homecoming draws a number of first-time Columbia football attendees, the Lions that played on Saturday were unrecognizable, even to the most diehard supporters. They played with a different energy, a different pace, and a different starting quarterback. For the first time all season, instead of junior Josh Bean starting and splitting time with sophomore Ty Lenhart, it was Lenhart who started behind center. Head coach Al Bagnoli said that there were a number of factors that went into the decision to start Lenhart.

“Josh is a little bit banged up. I’m not going to divulge exactly what it is, but he’s a little bit banged up,” Bagnoli said. “We have confidence in both guys, so it was a great week to say, ‘Hey, let’s see if we can get them both healthy.’ You know, Ty’s been playing great. We’ve got a lot of confidence in him so he deserved to play, and again, I thought he gave us a dimension, especially in the run game, that we sorely had needed.”

Columbia made it clear from the first play that it did not come to mess around. The Lions opened the game with what appeared to be a normal handoff up the middle before sophomore running back Ryan Young turned around and pitched the ball back to Lenhart, who subsequently found sophomore wide receiver Mike Roussos for a 47-yard gain to put the Lions at the Penn 28-yard line. After Young picked up 27 yards over three runs, Lenhart took the ball in himself on a designed quarterback run to put the Lions up 7-0 only two minutes and 16 seconds into the game.

This drive kickstarted the Lions’ best offensive performance of the season. In the first half alone, the team rushed for 122 yards, more than it had over the three previous losses combined. Overall, the Lions broke out of their offensive slump after averaging 244.2 yards per game over the first month of the season, racking up 413 yards against Penn.

Ninety-five of those yards came from Lenhart’s stellar performance running the ball. Last year’s Ken Germann Freshman of the Year Award winner set a new career-high, which included his two longest runs since arriving at Columbia. For Lenhart, his success running the ball was crucial in opening up the passing attack.

While the offense’s success was the biggest surprise of the game, the Lions’ defensive performance may have been even more impressive. The Lions did not allow Penn to score a point on offense, and this defensive dominance began with stopping Penn’s star running back, Karekin Brooks. Brooks entered the game averaging 157.2 rushing yards over the Quakers’ first four games; the Lions’ dominant defense held Brooks to only 60 yards. Bagnoli believes the team’s success at stopping Brooks was a concerted defensive effort.

“He was the main guy we were trying to say, ‘That offense starts and ends with him,’” Bagnoli said. “Starting with the kids up front, but even the kids in the second or third level, did a really nice job setting the edge without letting him get outside, gang tackling him, and really negating any big explosive plays which he’s built a career on.”

Time will tell if the Lions’ performance in this game is a fluke, or if they can expect to maintain the same level of success going forward. The Lions will have a chance to prove themselves next Friday at 6 p.m. when they take on Dartmouth in New Hampshire.