Field hockey wins OT thriller against Penn before falling in shootouts to No. 23 Monmouth

Field hockey wins OT thriller against Penn before falling in shootouts to No. 23 Monmouth 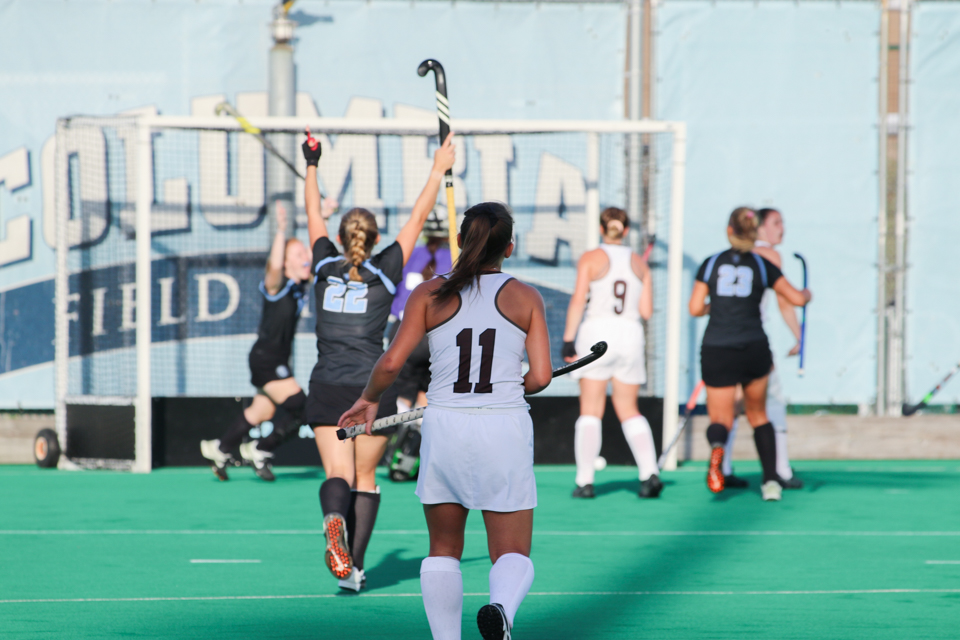 On a chilly Friday night at the Baker Athletics Complex, the Lions huddled, setting a game plan for a back-and-forth contest against Penn that had just entered overtime.

Decker, who was playing in her first-ever collegiate game, was instantly mobbed by teammates rushing onto the field to embrace her.

“It felt awesome. It felt earned, which I think was the most important part. … Everything we’ve been working for … we really put it all out there tonight,” Decker said.

Friday’s game saw four lead changes and four different scorers for the Lions, tied for their best mark all season.

The Light Blue entered halftime with a 2-1 lead off goals from sophomore midfielder Jaimie McCormick and junior midfielder Kelsey Farkas, who notched their second and seventh goals of the season, respectively.

The Quakers responded with an overwhelming attack, scoring three consecutive goals to grab a 4-2 lead over the Lions as the fourth quarter began.

Columbia fired back with three unanswered goals of its own, taking a 5-4 lead in the 52nd minute on the back of another goal from McCormick and two goals from sophomore midfielder Allison Smith.

Then, in the last minute of the fourth quarter, the Quakers found an equalizer. Elita Van Staden scored on a penalty corner, tying the game 5-5 in dramatic fashion.

The Lions, however, weren’t deterred.

“That last minute was kind of a blur, but I think once we hit overtime, it was like, ‘Let’s go.’ We’re ready, we practiced this so many times, and we did it,” McCormick said.

Decker then delivered the game-winning goal just 84 seconds into overtime, immediately clinching a victory for the Light Blue.

“I think we’ve been looking for a game like this … to show how much we really do fight back. We were down at one point by a couple goals … and I know that this game proved we wanted to win,” McCormick said.

“It was not a pretty game, but we’ve been asking the team to work with some grit and heart, and they showed that coming back down from two goals in the second half. So … [that] feels pretty good,” Nelson-Nichols said.

For Nelson-Nichols, who watched her team lose three games straight prior to Friday, the victory over the Quakers marked improvement in the team’s energy and playstyle.

“We asked them to be a little smarter with their energy. We’ve worked a lot on our energy transitioning out of regulation into overtime, and it was really good to see the team take leadership. … As soon as I saw their faces coming over to the sideline, I knew it was going to be us in overtime. I could tell,” she said.

Though Sunday’s matchup was equally dramatic, the Light Blue was unable to emerge victorious.

No. 23 Monmouth (10-4) took a 2-1 victory at home over Columbia in shootouts, the Lions’ second shootout loss of the season.

Columbia grabbed an early lead in the 10th minute when sophomore forward Isabella Collins found the back of the net. The Hawks would then tie the game in the 21st minute and hold the Lions scoreless for the rest of the match. In the shootout period, Monmouth scored the first two goals and the Light Blue couldn’t break through.

Junior goalkeeper Alexa Conomikes continued her impressive season, recording 10 saves and a .909 save percentage in the Lions’ effort.

The Lions take on Dartmouth in Hanover for their next Ivy League bout. Face-off is at 11:30 a.m. on Saturday.