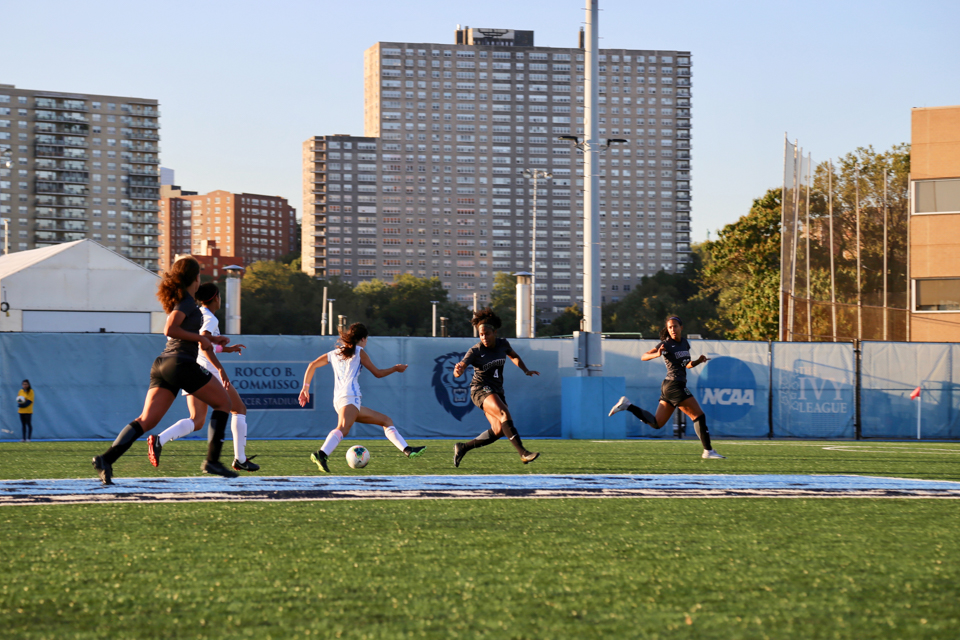 A referee took back the Lions’ second-half goal in a controversial call for the second time in two weeks.

In need of a win to stay in the top half of the Ivy table, women’s soccer instead had to settle with a 1-1 double-overtime tie at Princeton after a last-second winner was controversially called off.

Princeton (5-5-3, 1-2-1 Ivy), the reigning Ivy League champion, has dominated the matchup historically, with 22 wins to the Lions’ eight. Last season, the Tigers secured a 1-0 win against the Lions at Rocco B. Commisso Soccer Stadium.

However, Columbia entered this match hopeful that it would buck historical trends, as the Tigers have struggled in conference play this season, securing only one win ahead of Saturday night’s game.

First-year forward Shira Cohen led the Lions (8-3-2, 2-1-1 Ivy) in taking multiple jabs at Princeton’s goal in the first half, but, as in many games this season, these early efforts did not produce any goals. The Lions have struggled with slow starts all season, thus far outscoring opponents 6-5 in the first half but 12-6 in the second half.

The Tigers capitalized on the Lions’ inability to finish early, as a miscommunication in the box left Princeton forward Abby Givens wide open to beat first-year goalkeeper Liz Matei for the first strike. The goal was Givens’ first since Nov. 25, 2017, who was once the Tigers’ primary offensive weapon with 12 goals in the 2017 season. Head coach Tracey Bartholomew was frustrated by how easily Princeton scored.

“We just gave them too much space and too much time,” Bartholomew said. “At halftime, we tried to get ourselves up to different players and put more pressure on them and that sort of changed a lot of the play.”

While the Lions struggled to get anything going in the first half after Princeton’s goal, they stepped onto the field with authority as soon as halftime ended. With a cut from the right wing into the left corner of the six-yard box, Cohen scored a powerful left-footed shot only two and a half minutes into the second half, her second equalizer in three games. Junior midfielder Cayla Davis’s nutmeg on Princeton’s Tomi Kennedy perfectly demonstrated how fluid the Lions’ offense was in the first 15 minutes of the second half.

As time went on and the players’ energy depleted, neither team was able to maintain a structured offense for long. With just 30 seconds on the clock, Columbia forced a corner for one final chance to win in regulation. Senior defender Taylor Penn’s header hit the crossbar but wasn’t cleared far. Junior forward Jordyn Geller then connected with Davis again with a cross from the right side of the box, but Davis’s shot off the rebound was called back controversially by the referee. For Geller and Davis, the outcome was deja vu: A similar play during the Brown game on Oct. 5 ended the same way.

“When you watch it on video it’s even more aggravating to see. … I don’t even know what they called,” Bartholomew said. “I feel for the players.”

The last-second goal would have secured the Lions a buzzer-beater win and three precious points, but instead, the Lions had to continue to fight in overtime. Cohen, who was substituted back in late in the second half, had better stamina and pace than the Tigers’ defense, but none of it was put into effect when she had to leave the game early. Bartholomew confirmed after the game that it was, to the team’s relief, only a bad calf cramp, and she will return to the pitch very soon.

Bartholomew admitted that “the goal getting called back was definitely a good gut punch.” Going forward into the tough last three games, and the conference in general, is difficult, with “several teams at the top RPI wise.”

Nevertheless, Bartholomew believes that the team will soon recover from Saturday. The Lions are hopeful that they will beat Dartmouth next week; the Big Green has not earned a single point so far, despite starting Ivy play with a 7-1 record.

Columbia will play at Dartmouth on Saturday, Oct. 26. Kick-off is at 4 p.m. and broadcasting begins simultaneously on ESPN Plus.