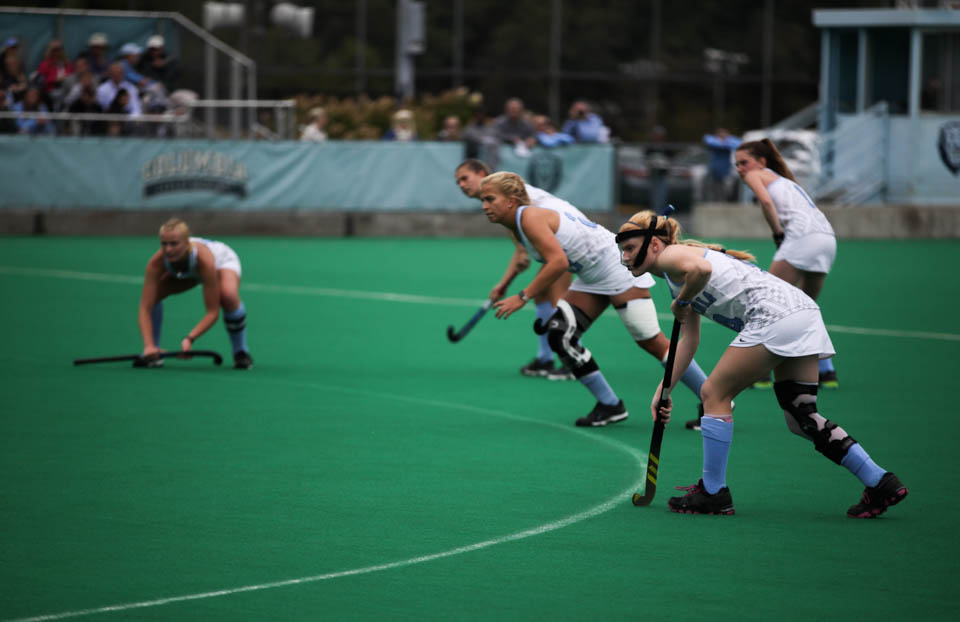 With only two more games left in Ivy League play, the Lions stand at 3-2.

With less than five minutes to go at Chase Field in Hanover, New Hampshire, the Lions trailed three goals to one, their match against Dartmouth seemingly decided.

Then, in an offensive flurry, first-year forward Ellie Decker scored two consecutive goals, her last one coming just two seconds before the end of regulation, leveling the score at 3-3 and sending the game to overtime.

“It was an amazing fight from our team. … A pretty big testament to the character of the group and their willingness to fight when time completely expires,” coach Caroline Nelson-Nichols said.

In overtime, Decker continued her heroics, netting the game-winning goal before one minute had passed, securing the second hat trick in Columbia field hockey history.

“She just has a knack for where the goal is. She’s the definition of a goal-scorer: able to come through in high-pressure moments in what looks like a very calm, composed manner,” Nelson-Nichols said.

Decker has now scored two-game winning goals this fall, the most goals of any first-year on the team. She has obtained this title in only three games played.

“There was anticipation that Ellie would be able to contribute straight away coming into the program, and I think the team has done a fantastic job to provide opportunities to her to be successful,” added Nelson-Nichols.

The Light Blue (7-7, 3-2 Ivy) began the scoring against the Big Green (3-11, 0-5 Ivy) in the second quarter, striking first off of a goal from senior midfielder Jennifer Trieschman, who notched her sixth goal of the season.

Dartmouth’s offense would then erupt for three straight goals, adding two in the third quarter and one in the fourth quarter to build a two-goal lead that looked insurmountable before the Lions came back.

With its Saturday victory against Dartmouth, Columbia moved into a three-way tie for third in Ivy League standings, while the Big Green’s loss furthered its struggles this fall, as it remains in the Ancient Eight’s seventh spot.

The Lions have two more games in their Ivy League slate this season, and while their 3-2 conference mark is competitive, Princeton remains undefeated at 5-0.

“It’s really just about us continuing to play our game and finding ways to come together as a team, laying the groundwork for the program moving forward,” said Nelson-Nichols.

Columbia next faces off against Yale at the Baker Athletic Complex on Friday, Nov. 1 at 6 p.m.