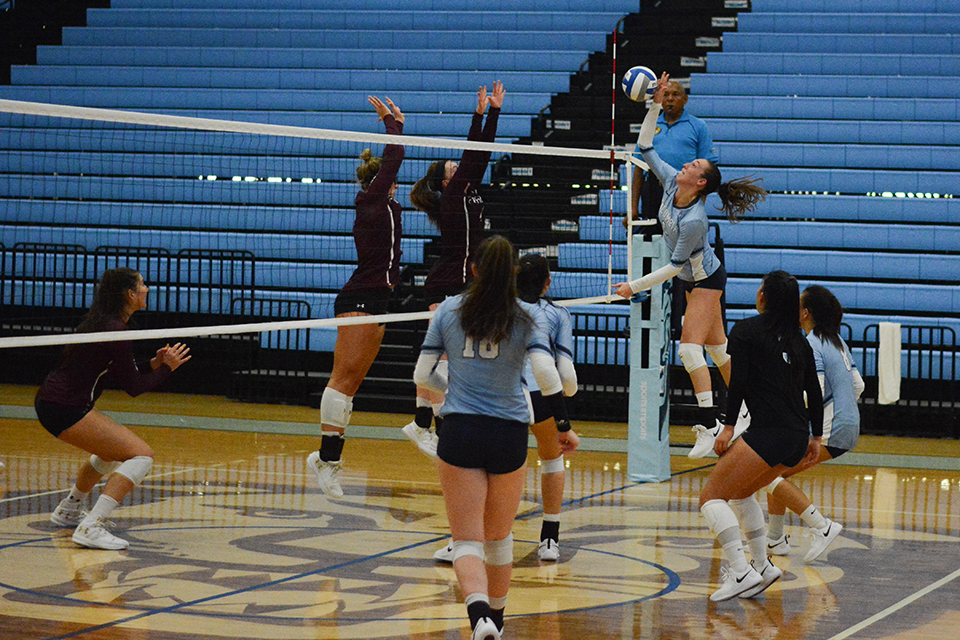 During their current three-game losing streak, the Lions have won only one out of ten sets.

After youth and energy helped Columbia volleyball dominate the early portion of the season, fatigue has defined volleyball’s last two weeks. Going against the best in the Ivy League, the Lions have lost three straight matches, winning only one of ten sets. After being swept by 2018 Ivy League Champion Yale, the Lions lost in four sets at Brown and were swept again at home by the current conference leader, Cornell.

On the Friday, Oct. 18 game at Yale, the Bulldogs showed their prowess and dominated nearly every aspect of the game, outhitting the Lions .378 to .215. Senior middle blocker Chichi Ikwuazom was shut down, recording only eight kills, by far her quietest showing of the season. In addition, the anxious Columbia squad made an egregious six service errors in the first set, and ten on the game, killing any continued offensive pressure it could establish. Coach Allison Keeley said the errors had “quite a bit” of impact on the Lions.

“It wasn’t something we’d seen before because we’d really relied on our serve,” Keeley said. “When something comes up that you’re not used to seeing, it just takes a while to adjust to it and to overcome it.”

Facing a more manageable opponent in Brown on Saturday, Oct. 19, the Light Blue continued to deal with the same defensive problems that plagued it the day before. Despite Ikwuazom’s return to form, putting down 21 kills at a blistering .567 hitting percentage, she could not lift the Lions to victory. After winning the first set 25-19, they had no defensive answer for the Bruins, allowing a hitting percentage of .329 to the conference’s sixth-best offense and losing in four sets.

“I think [the Yale loss] had some ramifications on the Brown game,” Keeley said. “We played well, we just didn’t compete quite as well as I think we could have at certain points in the game.”

After the disheartening road trip, the Lions took the week relatively easy, acknowledging the pressure of midterm fatigue. Keeley’s goal was to re-energize the team and encourage them to “get a little bit more joy back into the game” against Cornell.

“We were pretty excited because we were back at home,” Ikwuazom said. “Coming back and redeeming ourselves and playing Cornell again, we were pretty pumped for that.”

The return of the Columbia University Marching Band, instruments and all, also energized Levien Gymnasium. The band heckled, drummed, and sang throughout the Saturday, Oct. 26 game. However, even yells of “Ithaca has no redeeming value!” could not lift the Lions to victory.

The defense was much better than the previous two games, holding Cornell’s explosive offense to a .250 hitting percentage. But the Lions’ offense was dominated by the league’s best defense. With Ikwuazom, the Lions hit .059. Without her, the number would be negative—more errors than kills, an abysmal showing.

“You could see that they got us out of system a lot,” Ikwuazom said. “It was basically our hitters hitting against double blocks most of the time. It’s pretty hard to get kills against that.”

The Big Red was so confident in its two-set lead that it sang back at the marching band. After the band sang Christmas carols during a break in play, Cornell’s bench went through multiple verses of Holy Night, miming rocking a baby, while play was going on. Later, one player mimed choking at a tense point late in the third, which Cornell won 25-22, the closest margin of the night.

Keeley said that while the players didn’t play poorly, they “didn’t rise to that next level” of attacking against a high-level defense.

“We do it well, but sometimes not well enough to win,” Keeley said. “We pass the ball, but we don’t pass it where it needs to be all the time. We get a lot of touches, but we don’t convert them to attacks. So just being a little bit better, playing everything at just a little bit higher level.”

The Lions will look to reach that next level against Penn on Friday, Nov. 1, in Levien Gymnasium. First serve is at 7 p.m.