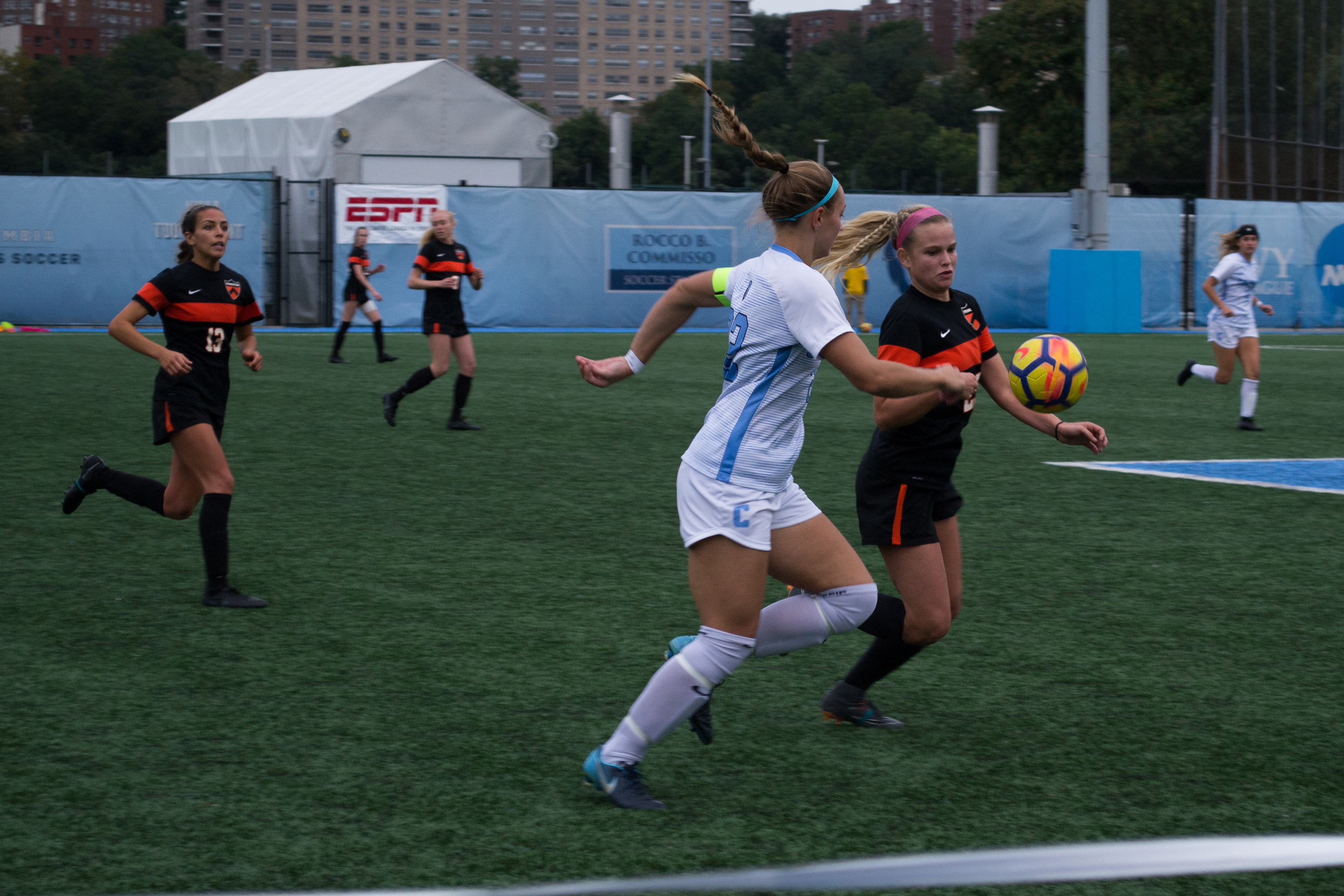 Columbia’s tie with Dartmouth on Saturday, combined with Brown’s victory over Cornell earlier in the day, eliminated the Lions’ last chance at winning the Ivy League title this season.

Women’s soccer lost all possibility of clinching the Ancient Eight crown this weekend when it tied 1-1 against Dartmouth. Despite leading in the first half after a goal by senior forward Emily Koe, the Lions failed to hold onto this one-goal advantage as they gave up a goal in the 52nd minute.

Columbia (8-3-3, 2-1-2 Ivy) has not lost to Dartmouth (9-5-1, 0-4-1 Ivy) since the 2014 season. Saturday’s goal marked the Big Green’s first against Columbia since its 2-1 loss in 2015. Yet missing out on two points on Saturday felt like a loss for the Lions, since the team is now seven points behind Brown with only two games left in the season. Brown sealed a victory at Cornell earlier on Saturday afternoon, ruling out the Light Blue’s shot at the conference title.

After a positive start to their season, the Lions’ tie in Princeton on Oct. 19 thwarted their steady upward trajectory. While a 10th win seemed possible two games ago, the team will now have to take a much more aggressive playing stance to win even a ninth against top teams Yale and Harvard. If they can pull off upsets in each of these matches, the Lions will end a 10-season drought without double-digit wins.

Head coach Tracey Bartholomew noted that the team must finish the season strong: “The reality is, if you want to win a conference championship, you’ve got to learn to beat the teams at the end of the season because we don’t have a tournament. I know that for them, they are gonna go out and win those games.”

At Dartmouth, the Light Blue, which has thus far been characterized by a strong possession game, was unable to keep the ball. The Lions struggled to connect on passes against Dartmouth and played passively until the Big Green’s forward Erin Kawakami, who troubled the Lions’ defense, went down with an injury in the 65th minute.

Commenting on the lack of offensive play at the beginning of the game, Bartholomew said that the team was “a little bit all over the place.” She attributed the tie to the team’s inability to control the pace of the game: “You know, you have your moments where you gift the ball away and I think that happened too much for us today.”

Although the Light Blue played without the ball, the team capitalized on Dartmouth’s careless passes in the midfield to have a through ball to first-year forward Ally Clark, who barely missed the far post with a right-footed strike. Dartmouth’s goalkeeper, perhaps still recovering from the Lions’ sudden counter-attack, kicked the ball way short on the goal-kick, and this time first-year forward Shira Cohen passed the ball across the 18-yard line to feed senior forward Emily Koe for Columbia’s first goal in the first half since the Sept. 22 matchup against Drexel.

However, the goal did not change the Lions’ rhythm. Dartmouth’s continued pressure after halftime secured the Big Green a quick 52nd-minute equalizer. If not for first-year goalkeeper Liz Matei’s eye for incoming crosses, Dartmouth’s offense would have overtaken Columbia. Matei’s effort finally galvanized the team to play in its usual possession-heavy style.

“We started battling back and, you know, the team that we have doesn’t give up,” Bartholomew said. “I knew that we were gonna try to fight to the end.”

Junior midfielder Cayla Davis’ continued aggression in the box also spurred the Lions on. In the 75th minute, Davis thrust herself in front of the defender, a prime location to catch the cross, and slid to beat the goalie for the volley. However, the shot sailed over the top of the crossbar. Missing this opportunity to go ahead, the Lions labored with the Big Green back and forth for 110 minutes without either triumphing. As a result, the Lions are short of their championship dream.

Looking at the Ivy League table and the teams’ strong record against non-conference teams, Bartholomew marveled at the competitiveness of the Ancient Eight: “[Brown is] ranked in the top twenty in the country. … I mean many of the games are one-goal games. You know, our conference is at the point where anybody has an opportunity to beat anybody year to year, which is exciting.”

The Lions will play Yale on Nov. 2 at 5 p.m. and then Harvard on Nov. 9 at the same time. Both games will be broadcasted on ESPN Plus.