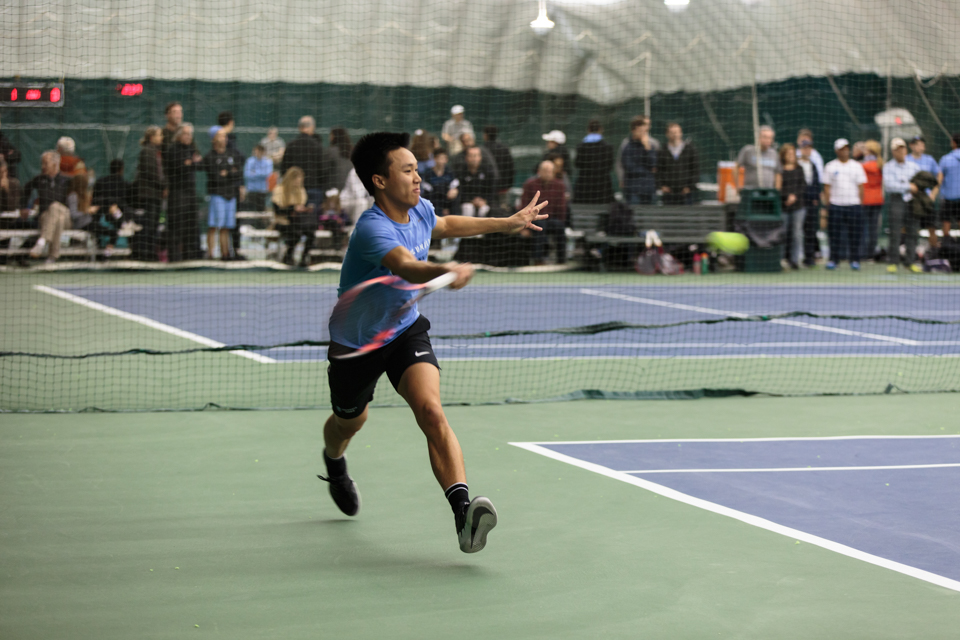 Jackie Tang will compete alongside junior Jack Lin at the Oracle ITA Fall National Championship in both singles and doubles.

After sitting out the spring dual season due to a broken foot, senior Jackie Tang has returned to the court with a vengeance. At the ITA Northeast Regional Championship in Philadelphia on Oct. 22, Tang rallied his way to the finals with precise movement at the net.

This accomplishment comes after Tang and first-year Anand Saluja went 3-0 in doubles at the Orange and Blue Classic in Charlottesville, and Tang and junior Jack Lin’s won in the doubles bracket at ITA All-American in Tulsa. According to head coach Howie Endelman, it was Tang’s work ethic that has allowed him to have so much success on the court this fall.

“Jackie was extremely diligent with the entire medical staff to come back from his broken foot in March. He has been consistent in his training, building all the time,” he said. “It’s not easy at regionals because you have to play a lot of matches, but he kept on building in Charlottesville and Tulsa, and it all came together for him at Regionals.”

In this same tournament in 2018, Tang battled through three rounds of singles play at before falling in the quarterfinals to eventual singles champion David Volfson of Cornell.

In both the round of 16 and the quarterfinals, Tang was victorious over players from Cornell. Tang and Eero Vasa of Cornell were evenly matched and battled through two sets and a tiebreaker. Tang took set one 7-5 before eventually falling to Vasa in the second set 2-6. However, he was able to clinch the match in the tiebreaker 6-4.

During Tang’s quarterfinal against Cornell’s Pietro Romandini, Romandini retired before the first set even concluded, pushing Tang into the final.

In the final, Tang took on his first-ranked opponent of the competition in No. 41 Dartmouth’s Charlie Broom. Despite a tense final round, Broom triumphed over Tang 6-3, 7-5.

By making it into the finals, Tang qualified for the ITA Fall Championship. Last season, Tang injured himself at ITA Fall Nationals, forcing him to sit the rest of the year out.

Lin will also be playing in the singles bracket, and together, Tang and Lin will compete in the doubles bracket. Last year, Lin along with former doubles partner Will Matheson, CC ’19, were seeded first in the tournament but fell in the first round of competition against an unranked pair.

Despite having a rough Fall Nationals in 2018, Endelman believes that with Lin, Columbia will be able to take home another national title.

“[Fall Nationals] are the same level-event as Malibu and Tulsa, and we’re going to keep doing what we’ve been doing. This is Jack’s third year in a row playing at the national level, and he knows what the competition is like. He knows what he needs to do to take himself there.”

The fall tennis season will conclude when Tang and Lin participate in the Oracle ITA Fall National Championship in Newport Beach, California. The tournament will begin on Nov. 6.