Columbia sputters on both sides of the ball with 45-10 loss to Yale, falls to 2-5

Columbia sputters on both sides of the ball with 45-10 loss to Yale, falls to 2-5 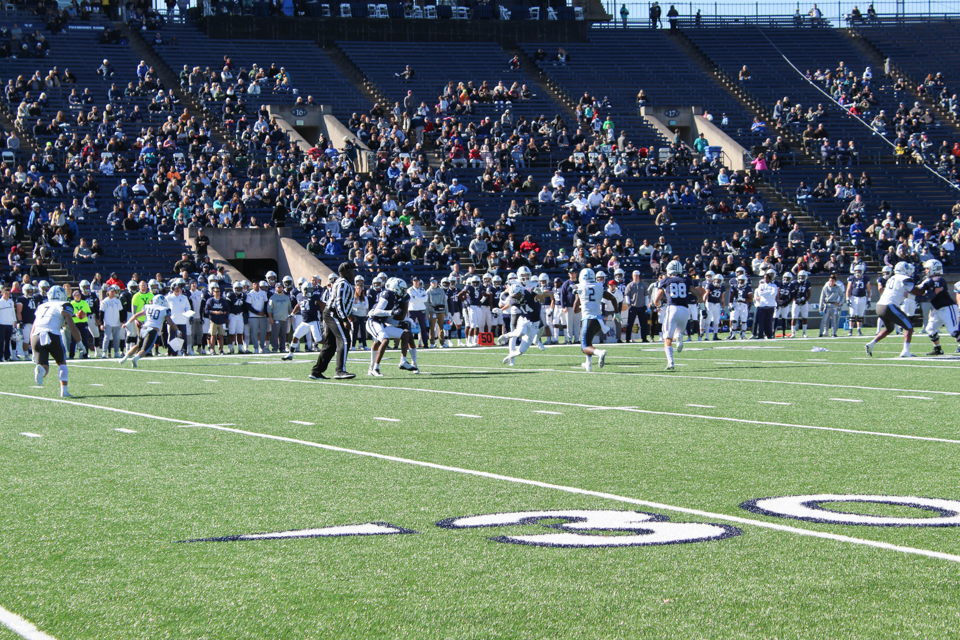 With Columbia’s 45-10 loss to the Yale Bulldogs, the Lions must win their next three games to finish with a .500 record on the season.

While football has struggled to win games all season long, the Lions have been able to find some silver lining in each of their losses. In the resiliency Columbia showed against Dartmouth and the solid 45 minutes of defense against Princeton, the coaching staff had something positive to focus on after the game. However, it will be a tall task for the coaching staff to find anything positive to focus on after the Lions’ 45-10 loss to Yale (6-1, 3-1 Ivy).

With the defeat, Columbia (2-5, 1-3 Ivy) lost its last chance to secure its third consecutive winning season. The best the Lions can do this season is .500, and that is only if they win the final three games of the season. If the Lions are hoping to finish the season strong, they will have to perform much better than they did on Saturday.

Early on, it looked like the Lions would put up a fight in this game as sophomore wide receiver and First Team All-Ivy League punt returner Mike Roussos returned the opening kickoff for 53 yards to the Yale 47-yard line. However, Roussos’ return was quickly neutralized as sophomore running back Dante Miller coughed up the ball and Yale cornerback Melvin Rouse II pounced on the ball for the recovery.

The Lions’ defense proved to be as ineffective on Yale’s ensuing offensive drive. The Bulldogs started with the ball in a relatively good position on their own 44-yard line. The Elis took only two plays to gain the 56 yards for a touchdown. The first big chunk of yards came from a 39-yard pass from Yale quarterback Kurt Rawlings, who placed the ball perfectly past the outstretched arms of the diving junior defensive back Will Allen to connect with wide receiver Darrion Carrington. Immediately after, Rawlings found JP Shohfi for a 17-yard touchdown to put the Bulldogs up 7-0 early.

After the first three drives of the day ended in a fumble and two three-and-outs with a total gain of six yards, the Lions’ offense finally broke out at the end of the first quarter with a methodical 19-play, 71-yard drive that ended in a field goal. While the drive gave Columbia its first points of the day, it was ultimately disappointing as the Lions had a first down at the Yale 3-yard line, giving them three chances to score a short touchdown.

The Lions lined up on each of their three chances with 10 men along the offensive line and only Roussos in the backfield. On the first two plays, Roussos took the snap from the shotgun and ran up the middle before getting stuffed each time by the Bulldogs’ defense. On the third try, Roussos attempted to catch the defense sleeping by going to the outside of the offensive line. While Roussos was able to get into the endzone successfully, the touchdown was negated by a holding penalty on senior offensive lineman Drew Schoeberl and the Lions were forced to try to score from the 12-yard line. After the game, Bagnoli said that he decided to line up in the same formation on three straight plays in order to make sure he put the ball in Roussos’ hands.

“It’s something that we’ve done the entire year,” Bagnoli said. “At this point, we think Mikey is one of our most dynamic players, so we want to get the ball in his hands. Obviously, it turned out OK. We did score, but we got it called back, so obviously it didn’t turn out the way we want. But that’s what I’m talking about. We just can’t put ourselves in situations where we’re having touchdowns called back against a really high-scoring team.”

Lenhart’s pass to junior running back Broderick Taylor came up short before first-year place kicker Alex Felkins knocked the ensuing kick through the uprights to make the score 7-3.

In the second quarter, the Lions looked like they had a chance to take the lead as they found themselves inside the red zone after a pass interference penalty against the Bulldogs. However on the ensuing play, Lenhart tried to find junior running back Marquavious Moore in the flat, but Moore did not turn around early enough and the pass ricocheted off of his shoulder pads into the arms of Yale linebacker John Dean. The Bulldogs took full advantage of the Columbia turnover, driving 85 yards downfield for a 5-yard touchdown run by Rawlings.

The Lions’ defense struggled to contain the Yale passing attack throughout the game. While Rawlings averaged 19.5 yards per completion, Lenhart completed 17 of his 38 pass attempts for 165 yards and an average of 9.71 yards per completion. One reason for the Lions’ struggles in the passing game is that they were missing three of their top targets. In addition to once again missing senior wide receiver and First Team All-Ivy League Ronald Smith, the Lions were also without senior wide receiver and captain Josh Wainwright and junior wide receiver Emerson Kabus. This made it difficult to move the ball downfield through the air.

“Penn did a nice job with their wide receiver corps … pushing the ball downfield and making some vertical throws and we’re just not able to do that at this point as consistently as we’d like to do without Ronald, without Josh, without Emerson,” Bagnoli said.

In addition to the injuries to its wideouts, the Lions were once again without junior starting quarterback Josh Bean. Bean has not played since Week 4 against Central Connecticut State University, a decision Bagnoli said was made to get him back to full strength. Earlier in the week, Bagnoli made it sound as if Bean would finally return to action this week, but Lenhart played the whole game. Talking after the game, Bagnoli admitted that he knew early on that Bean would not be available for the Lions.

“I lied and I’ll continue to lie if I think that’s in the best interest of our program,” Bagnoli said. “He was not ready today, and hopefully he’ll be ready next week, but, you know, we certainly would like to play Josh Bean. It’s not that we don’t want to play Josh. It’s just right now he’s just not in a situation where we can play him.”

All season, Columbia has been plagued by the lack of stability at quarterback. After the team’s performance against Yale, however, it has become clear that the Lions have issues to address regardless of whether it is Bean or Lenhart who lines up behind center next week. With only three weeks left in the season, the Lions are almost out of time to fix their issues.