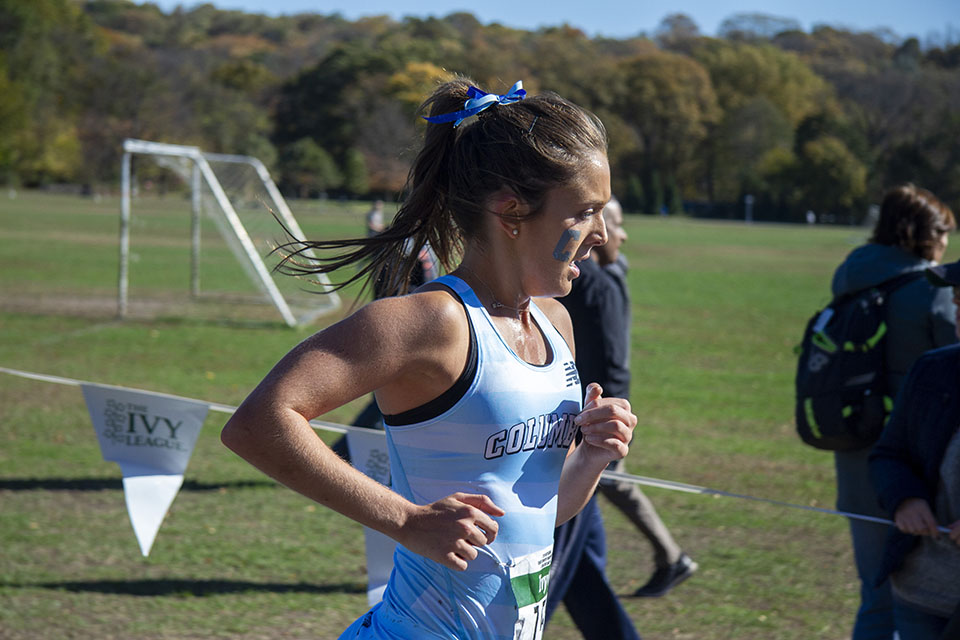 The Lions had a banner day at the 2019 Ivy League Heps. The women’s team clinched its third consecutive title while senior Kenny Vasbinder won the men’s individual crown.

The crowd began to close in on the runners even before the starting gun’s smoke had cleared the air. Its eagerness—and unabashed intensity—is emblematic of the importance of the Ivy League Heptagonal Cross Country Championships to the cross country community.

And by the time it was all over, Columbia, which hosted the annual event at Van Cortlandt Park on Friday, had plenty of representatives on the award stage.

This impressive display of depth meant the women’s team tallied just 57 points, putting them well ahead of second-place finishers Harvard and Penn, who tied with a score of 89.

Wasserman heaped praise on her teammates after the race.

“Every practice it’s been incredible working with this group of girls, so I really just tried to channel that energy at Heps and make sure I could enjoy it with these amazing 11 other girls,” Wasserman said. “I’m super excited, and I wanted to enjoy every moment of it because it was the last one, and I just have felt so lucky to be a part of this team.”

Meanwhile on the men’s side, first-year Tyler Berg hung on to the leader pack for much of the race. Earlier in the week, director Daniel Ireland had cited Berg as a runner to watch. Berg delivered on Friday, earning fourth place and membership on the first All-Ivy team.

In the men’s race, many of the runners stayed tightly packed together for the entire first lap. There was no clear leader pack until the racers emerged from the wooded, hilly area of the course. By the time they materialized, Vasbinder was leading a throng of runners including Berg. The athletes began to spread out as they started their second perimeter loop of the park, with the leader pack splintering as well. Vasbinder cruised, even throwing a glance back to check his adversaries’ progress just before he crossed the finish line. He clocked a 24:32.0, 6 seconds ahead of Penn’s Anthony Russo.

“I’m very happy to be able to win the race, on the home course, with a lot of friends and a lot of people I’ve been on the team with. No other better place to run a cross country meet,” Vasbinder said.

The meet’s attendance was much higher than at previous cross country events at Van Cortlandt. Students from multiple universities, decked out in their school colors, made the trek to the Bronx to watch their peers compete. Some Princeton fans wore tiger onesies.

But there was far more light blue than anything else, an advantage that Vasbinder didn’t take for granted. “I definitely tried and was able to take a lot of energy from the crowd,” Vasbinder said. “I love when I’m able to run a cross country meet where there’s a lot of noise and a lot of positive support for Columbia.”

Both Vasbinder and Wasserman were surrounded by supporters after their respective races. Parents, alumni, friends, and coaches all lingered after the event in anticipation of the awards ceremony. Someone brandished a Columbia flag. Many clutched cameras. Chants of “Three-peat!” reverberated as the Lions accepted the first-place trophy for the third season in a row. Wasserman and Alonzo extended the weighty hardware to Ireland and said, “It’s all yours,” as he shook his head.

Days before Heps, Ireland was confident that if his top runners lined up on Friday and ran their best, the women’s team would “have a super shot to win again.” Their goal, he said, was to simply be as good as they could be. Not only did his predictions came true, but the Lions have now set themselves up for a chance to tie the longest streak of Ivy League Heps wins in Columbia cross country history. The only time the women’s team won four titles in a row was from 2002 to 2005.

But this season is far from over for the Light Blue. Next week, both teams head to Buffalo for the NCAA Cross Country Regional Championships. Last year, Wasserman noted, the women’s team won Regionals, and is looking to defend the title.

“Ireland always says, ‘Hey, our season doesn’t stop after Heps; we’ve got to keep pushing,’” Wasserman explained. “And that would just be really cool to be able to help bring the team back [to Nationals], and I want to do all I can to help us get there.”

Wasserman is confident in the Lions’ potential, especially after such a consistent season, with stellar performances across the board from upperclassmen to runners in their first season of cross country, such as Camacho.

Ireland echoed Wasserman’s positive outlook, adding that as usual, the women’s team will seek recognition as one of the top nationally-ranked teams.

“I know we’re good enough girls here that if each one of them is doing everything they can to be the best they can be, then we’re going to be in a position every year to win an Ivy title and to be a top 25 team in the country,” Ireland said.

On the men’s side, Vasbinder expressed more uncertainty about the regional meet since “there’s a lot of good teams.”

“It’s going to be fun to put ourselves out there with some of the best runners in the country and the best teams in the country,” Vasbinder said. “So I’m just going to try to do my job, go out there, run from the front, and just see how high I can finish.”

Regionals are followed by the NCAA Cross Country National Championships, which will be held in Terre Haute, Indiana, on Nov. 23. Teams automatically qualify for Nationals by placing first or second in their region. Additionally, 13 teams and 40 individual runners are selected at-large to compete. Ireland said the plan is for the non-qualifying runners to compete at the IC4A/ECAC Cross Country Championships, a meet that was established before Nationals, although it is much smaller .

“[The IC4A meet] keeps the people focused and training just as long so they can learn, ‘Hey, I can train this long, and at a high level, to the end of the season,’” Ireland explained.

But there is also a chance that the runners will drive to Terre Haute to support their team. If they do, Ireland has no plans to stop them.

“It’s one for all and all for one type thing; everyone supports each other, all the way around,” Ireland said. "It makes for a nice good group.”