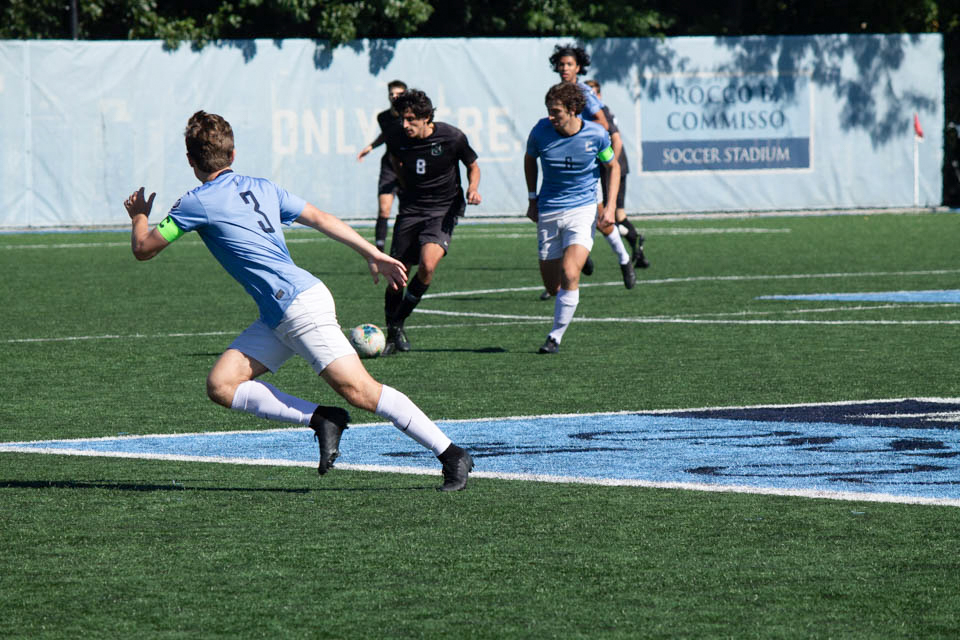 Yale (11-2-2, 4-1-0 Ivy) sits at the top of the table with 12 points and has only suffered a conference defeat at the hands of Penn this season. Although Columbia (4-7-4, 1-2-2 Ivy) entered this match with only one conference win under its belt this season, the Lions managed to turn things around with a home win against Fordham last Tuesday. Unfortunately for the Lions, they could not keep their run of good play going.

The first half saw both teams go toe-to-toe as each looked to knock in the opening goal. Yale dominated the half offensively with the Bulldogs getting off ten shots as compared to the Lions two. The Light Blue were forced into a defensive position, and first-year goalkeeper Michael Collodi pulled off an impressive seven saves, keeping the Bulldogs off the score sheet.

This is not the first time Collodi has proven himself to be vital in keeping the hope alive for the team as he has saved all three penalty shots he has faced this season. On the other side, the Lions were unable to break through Yale’s backline and registered zero shots on goal in the first half. The deadlock continued into the second half.

Columbia’s offense was more aggressive at the start of the second half as it got off five shots instead of two. First-year midfielder Uri Zeitz was substituted in for sophomore defender Andrew Stevens to boost the Lions’ chances of scoring a goal. Leading the Ivy League with 19 shots on goal and ranking among the top ten in shots (32), goals (4), and points (10), Zeitz has proven to be a formidable force on the field. He did not disappoint as he almost gave Columbia the lead in the 62nd minute with a shot aimed at the bottom corner of the goal that forced a save out of Bulldog goalkeeper Elian Haddock. Seven minutes later, the Bulldogs found their opening and scored the first goal of the night. The referee called a foul on the Lions, allowing Yale to set up a free kick. Yale midfielder Mark Winhoffer lobbed the ball into the penalty area, where it was met by the head of teammate Enzo Okpoye, who directed it towards the back of the net.

Yale did not stop its barrage on Columbia’s goal. The Bulldogs registered nine more shots on target, and their efforts paid off when the second goal of the night came nine seconds before the final whistle. Winhoffer took advantage of Miguel Yuste’s ball that bounced off the post and played it into the Columbia goal. It was the last nail in Columbia’s coffin, both for the night and for the 2019 season.

This is the first time Columbia has fallen to the Bulldogs since 2009. The Light Blue, who had come so tantalizingly close to victory last year, will have to wait one more year to fulfill its dreams. Yale continues to dominate the conference as the countdown to the end begins with just two more matches remaining.

The Lions will hope to redeem themselves on Sunday, Nov. 10, when they take on Harvard. Kickoff will take place at 1 p.m. at Rocco B. Commisso Soccer Stadium.