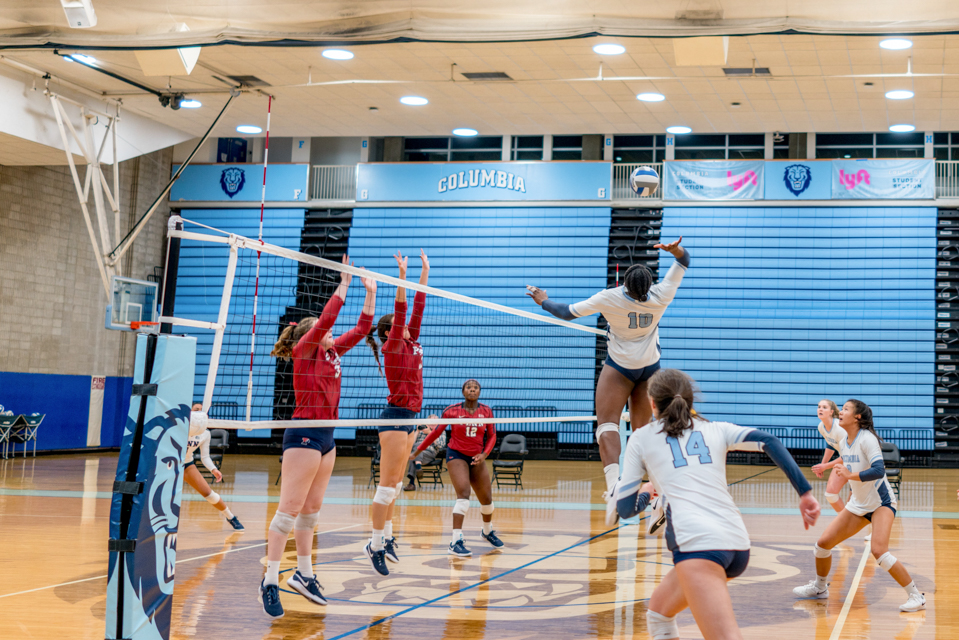 Ikwuazom set a new Columbia single-season record for most kills with 418 in 2019.

Chichi Ikwuazom is going down in the record books. The senior middle blocker set a new Columbia single-season record for most kills after dominating this weekend’s homestand. The Lions beat Penn 3-1 in Friday’s matchup, but then lost on Saturday in four sets to current Ivy leader Princeton after a comeback effort fell short in overtime of the fourth set. Ikwuazom shone in both games.

On Friday, Nov. 1, the Lions (11-9, 4-6 Ivy) achieved something they had been talking about for weeks: switching the energy. After an overtime 27-25 loss to Penn in the first set (9-10, 2-8 Ivy), all the swagger seemed to radiate off the Quakers. While Columbia talked seriously in time-outs, Penn players locked arms and danced the cancan for parts of the break. During another game break, six Quakers climbed on top of each other to form a three-level human pyramid as “Let’s go Penn” chants echoed around Levien.

Undeterred, the Lions pushed back in the second set, which was just as tight as the first. Late in the second, up by only one point, junior outside hitter Kaitlin Schultz slammed down a kill that sent Quakers sprawling before flexing to celebrate, forcing a Penn time-out. Columbia went on to win the set 25-23, and the energy was back on its side.

“[Schultz] was a big difference in the game tonight,” coach Allison Keeley said. “She probably [accounts for a] three, four-point swing the way she played tonight, both with her blocking and with her hitting. She got us out of trouble.”

The Lions pulled away from the Quakers after that, putting down convincing 25-21 and 25-20 victories in a full team effort. Both Schultz and first-year outside hitter Pierce Woodall recorded career highs in kills, with seven and 12 kills respectively. First-year libero Chloe Rutledge had six digs, including a couple fantastic efforts in the third set that brought the crowd to life. And Ikwuazom dominated the court, recording 27 kills in her best showing since September.

The victory over Penn gave the Lions their fourth Ivy League win, matching their total from last season with five games still to play. It was a reminder for Keeley of the team’s “tremendous” growth since her arrival, which she attributed to the seniors’ leadership and commitment to the program.

Seniors played a large role in the team’s 1-3 loss against Princeton (13-6, 9-1 Ivy). Despite seven blocks, including six involving Ikwuazom, the Light Blue dropped the first set 25-21. The Lions looked tired in the 25-17 second set loss, outhit 0.375 to 0.121 by the Tigers’ intimidating offense. But the defense tightened up in the final sets and held Princeton’s standout Maggie O’Connell, who demolished the Lions in their first matchup, to a 0.231 hitting percentage. As the Tigers’ right side was stifled, Columbia came up big in the third set, getting its first lead of the game late and winning the set 25-23 off a block by Ikwuazom.

Ikwuazom continued to dominate in the fourth set, setting down eight kills as fans stomped so loud the stadium shook. While the Lions could not overcome four service errors and Princeton’s offensive depth, fans still rose to their feet with a cheer of “CHICHI!” after her 418th kill of the season tied the game at 20-20. After the match’s end, teammates hugged Ikwuazom on the court. Junior setter Audrey Cheng, one of Ikwuazom’s closest friends, burst into tears.

“[Playing with Ikwuazom is] one of the most special experiences I think I’ll ever have in my life,” senior libero and fellow captain Kalie Wood said. “She is a one-of-a kind human being. … I just wish her all the best, beyond [volleyball] even, because she’s just one of the most beautiful human beings I’ve ever gotten the chance to know.”

Earlier this season, Keeley said the team treats Ikwuazom’s milestones not only as individual awards but as recognition of the team itself. The Lions will try and use this historical kill number to energize the team as the season winds up.