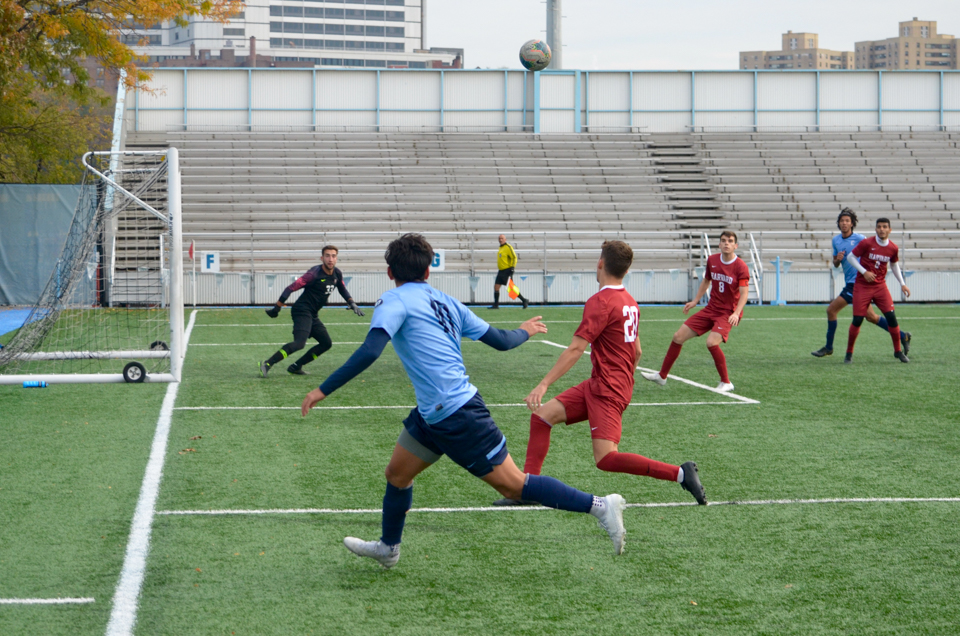 After being shut out in the last two consecutive games against Yale University and Hofstra University, Columbia’s offense finally found its feet against Harvard.

Sunday afternoon saw men’s soccer crush Harvard University 6-1, making the game a fitting celebration of Senior Day, when the Lions say goodbye to their graduating class. Playing for the last time at home, senior defender Rory Madigan and midfielders John Denis, Matthew Swain, Danny Laranetto, Cyrus Siminou, Vana Markarian, and Nick Marcin proved why they would be missed, as the group accounted for four goals and three assists in their home finale.

Harvard (0-13-1, 0-0-6 Ivy) came into the encounter on an eight-game losing streak. The Crimson sits at the bottom of the Ivy League table having lost six of seven conference games. Columbia (5-7-4, 2-2-2 Ivy) has fared better thus far, but is still out of contention for the Ancient Eight crown.

After being shut out in the last two consecutive games against Yale University and Hofstra University, Columbia’s offense finally found its feet against Harvard. The Light Blue opened the game with an early goal by sophomore midfielder Sebastian Gunbeyi at the three-minute mark while first-year midfielder Uri Zeitz bagged the assist with a clean through pass to Gunbeyi in the penalty area. Facing off against only the goalkeeper, Gunbeyi kept his cool and curled the ball into the top right corner of the goal, putting Columbia in the lead 1-0; this marked Gunbeyi’s fourth goal and Zeitz’s third assist of the season.

Harvard was quick to respond, however, surging forward in a Crimson wave for the counterattack. Harvard’s efforts were not in vain, as only four minutes after Gunbeyi’s goal the Crimson was able to level the score, 1-1. Harvard midfielder Sam Pratt stole the ball from Columbia’s defense at the top of the penalty box and played a short pass to midfielder Willem Ebbinge, who maneuvered his way between the Light Blue defense to let loose the ball into the bottom-right corner of the goal.

Columbia did not sit quiet, and in the 15th minute, the Lions were awarded a free-kick just outside the penalty area. Denis lobbed the ball with killer precision into the penalty box, where it was met by the diving head of Swain, who directed it into the back of the net to put the Lions back in the driving seat with a 2-1 lead.

Denis was not done for the night. Within a span of four minutes, Denis changed the scoreboard from 2-1 to 4-1. In the 30th minute, Gunbeyi rushed forward to put pressure on the goalkeeper, who fumbled the ball, allowing Gunbeyi to push it out to Zeitz . He quickly released the ball to Denis, who shot from six yards out. Three minutes later, a long ball by first-year goalkeeper Michael Collodi forced the Crimson goalie off his line to clear the ball. However, the goalie’s clearance landed at the feet of Denis, who calmly lobbed the ball over the goalkeeper’s head into the empty goal.

Columbia’s lead increased to 6-1 in the second half thanks to Zeitz and Marcin. The 70th minute saw Zeitz pick up his fifth goal of the season with a powerful right-footed shot into the far post. Zeitz is now No. 1 in the Ivy League with his 19 shots on goal. Marcin scored the closing goal of the night in the 79th minute. Picking up a ball played to him by midfielder Danny Laranetto, Marcin smashed a shot into the net from the top of the box.

The six goals marked the highest scoring tally achieved by the Lions since their encounter with Harvard in 2017, when they defeated the Crimson 6-0. This weekend saw Columbia extend its winning streak against Harvard to three. The Light Blue has won five of the last eight encounters between the two teams.

Men’s soccer will look to replicate its victory as it concludes Ivy play next Saturday, Nov. 16, when it goes on the road to play Cornell. Kickoff will take place at 4 p.m..