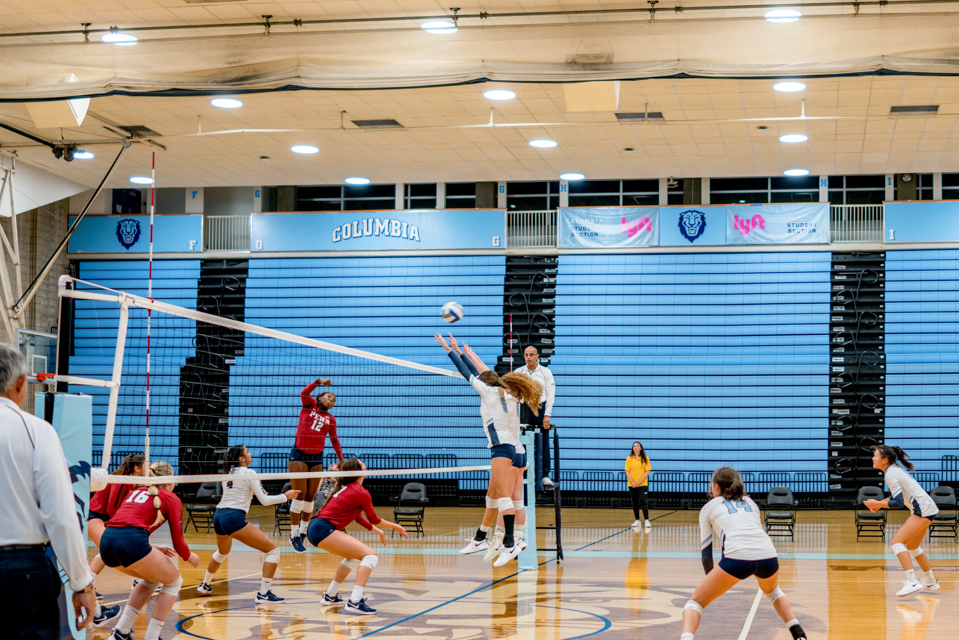 The Lions drew almost 200 attendees to Senior Night, which began with an extended recognition of the Lions’ senior players, who were presented with flowers, cards, and framed jerseys.

In volleyball’s last homestand of the season, the Lions fell just short. Despite an outstanding performance from first-year outside hitter Pierce Woodall, Brown overpowered the Lions 3-1 on Friday night. Then on Saturday, Columbia could not break through a stifling Yale defense on Senior Night, falling 3-0 to the 2018 Ivy League Champions in front of a packed gymnasium.

Against Brown (13-9, 5-7 Ivy), Woodall nearly powered the Lions (11-11, 4-8 Ivy) to a comeback with 24 kills. In the third set, the Light Blue’s only winning set of the weekend, Woodall put down three kills in a row, helping to send the match into overtime. Woodall hit one ball off the face of a Brown player, knocking her to the ground and energizing the Light Blue players and the crowd.

“I actually had a really rough practice yesterday and I was kind of teetering on the edge of ‘I don’t know how well this is going to go,’ but I think that I just dialed in [for the game],” Woodall said. “I was hitting shots that I honestly didn’t even know I could hit, [that] I haven’t hit before.”

She was supported by senior middle blocker Chichi Ikwuazom, who downed 18 kills, and first-year outside hitter Kiara Robichaud, who finished with 13 kills and two aces in her best showing since her early-October ankle injury.

While the offense was explosive, the defense was porous, allowing a .342 hitting percentage to one of the conference’s weakest offenses. The service was also weak, especially in the first two sets. Columbia committed four service errors in the 25-22 second set loss, accounting for the most errors of the night.

These issues reared their heads at the least opportune times. Columbia led for extended stretches during the last three sets, but could not figure out how to finish Brown off. The Bears’ set wins came from 4-1, 6-2, and 5-2 runs, as the Lions allowed aces to drop on their side and sent balls into the net.

“They just need to have a little more composure,” head coach Allison Keeley said. “They try so hard that they over-try and they do things that they don’t normally do.”

The Light Blue still could not find that composure in Saturday’s match against Yale (14-7, 10-2 Ivy), which recorded its sixth straight sweep of Columbia by controlling play late in the second and third sets. After offensive fireworks the night before, the Lions hit under .100 as a team. Without Ikwuazom’s 17-kill contribution, they would have finished with more errors than kills.

Despite the disappointing result, the crowd in Levien Gymnasium was energetic throughout the entire game, cheering or booing after every point. The Lions drew almost 200 attendees to Senior Night, which began with an extended recognition of the Lions’ senior players, who were presented with flowers, cards, and framed jerseys.

There were other, informal recognitions as well. Relatives of senior libero Kalie Wood brought a giant cutout of her baby picture to the game. And Narda Chin, who lives in Ikwuazom’s neighborhood, brought family and a colorful “CHICHI” poster to the game.

“It just gives me such pride knowing that this is a sport she’s been playing since high school, and she’s excelled at it,” Chin said. “My daughter actually wants to be like Chichi when she grows up. She wants to play volleyball, and so hopefully she’ll follow in her footsteps and play volleyball for Columbia.”

Appropriately, the seniors were the game’s bright spot. Senior middle blocker Rose Compton put down a kill and 1.5 blocks. Wood led the team with 13 digs and three aces and senior setter Grace Campbell led the team in assists for the first time since 2017, an achievement which she said “brought back a lot of memories.” Ikwuazom recorded over half of the Light Blue’s kills, further extending her single-season kill record, the largest in program history.

“It’s very motivating indeed,” Ikwuazom said of her Senior Night recognition. “Especially because there are friends and family to think of how far you’ve come, how much they’ve done for you. You kind of play for them, in the end, and your team.”

The Lions will close out the season next weekend with games against Dartmouth and Harvard. Columbia will face the Big Green on Friday, Nov. 15 at 7 p.m. The Light Blue will finish the season on Saturday, Nov. 16, against the Crimson at 5 p.m.