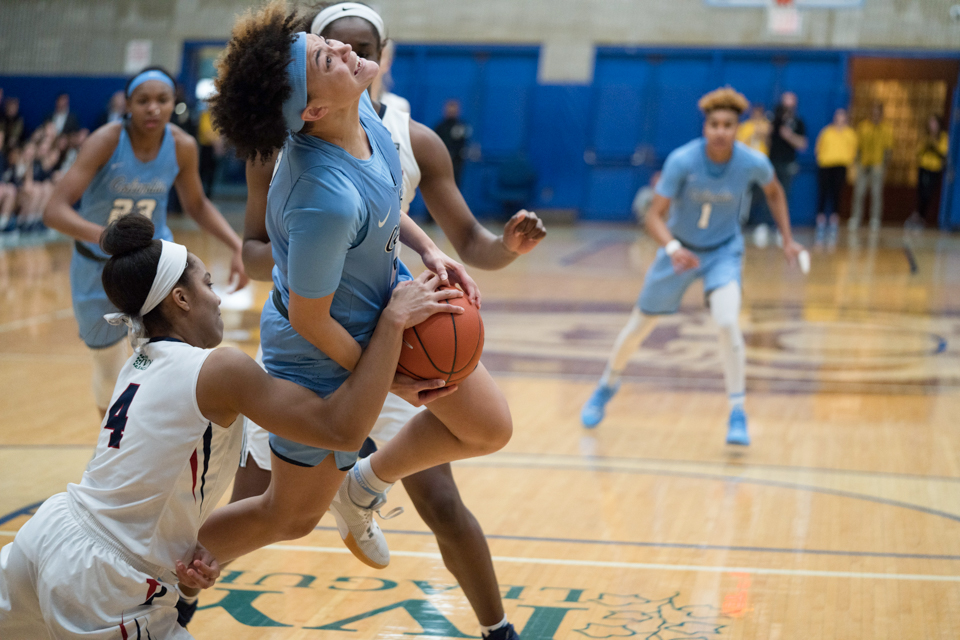 Women’s basketball had a packed schedule to open the season, with three games in its first week. The Lions achieved a 1-2 record with the 70-51 win over Fordham University on Sunday, Nov. 10 after losing to University of Albany 82-78 in overtime on Tuesday, Nov. 5 and to St. Joseph’s University 71-57 on Thursday, Nov. 7.

First-year guards Kaitlyn Davis and Abbey Hsu led Columbia’s highlight reel, averaging double figures in scoring through the first three games. Davis had a historic debut for the Light Blue after finishing Tuesday’s game with 23 points and 13 rebounds. Hsu averaged 16.7 points per game on a .553 shooting performance, including a 22-point game on Thursday.

Sophomore guard/forward Sienna Durr, 2019’s Ivy League Rookie of the Year, has had a rough start so far, however, averaging only 7.7 points and a team-high four personal fouls per game. On Thursday night, Durr fouled out in the fourth quarter and only played 15 minutes in total.

Thursday’s home-opener loss against St. Joseph’s was especially frustrating for the Lions, who fought back from a 12-point deficit only to lose to Albany in overtime on Tuesday. The team netted just 35.7 percent of their shots in Levien Gymnasium. After averaging 7.3 three-pointers per game last season, the Lions shot a horrific 8.3 percent beyond the arc on Thursday, recording only one three-pointer.

Meanwhile, they allowed St. Joseph's to convert on 51.9 percent of their shots. Head coach Megan Griffith said that the team must recover from the bad defensive effort.

“[St. Joseph’s] did a really nice job just running their action and being disciplined,” Griffith said. “They kind of ran us around today a little bit, we just, we were settling; we were indecisive. We didn’t really play our basketball.”

The game’s first half was a tight defensive matchup. Columbia’s defense limited St. Joseph’s to 30 points, while its offense, though not fantastic, put 32 points onto the scoreboard. After halftime, however, the Lions seemed to be a completely different team. St. Joseph’s shot 60 percent from the field, outscoring Columbia by 14 points. At the start of the fourth quarter, St. Joseph’s took advantage of six Light Blue turnovers to make a 13-0 run, pushing their lead to 19 points.

Hsu was not happy after the loss, despite a masterful performance. She stressed that they “have to be better moving on” and showed an intense desire to win Sunday’s game for the home fans.

Griffith also believes that the team must continue to improve: “To me, this is so far from where we need to go. Even if we’ve been two and oh, I would have told you the same thing. … It’s just focusing on the process, focusing on growth every day. … This is going to be a different team that we see on Sunday.”

Indeed, on Sunday the Lions played as if Thursday’s tough shooting never happened. They scored 70 points on a Fordham team that held No. 16 Notre Dame to 60 points on Nov. 5. The Light Blue duo of Davis and Hsu combined for 29 points, and Columbia out-rebounded Fordham 37-27, continuing a strong week of rebounding.

“If we share the ball and we play our system, we are a really hard team to play with because we have a lot of weapons on the floor,” Griffith said. “But … just one-on-one here and one-on-one there, you know, that’s just not fluid basketball. When we play fluid, and we play together and make quick decisions, we are a really fun team to watch.”

For the young women’s basketball team, Griffith thinks that “fighting through that messy stuff to figure out who you are” is crucial. Even after Sunday’s win, a testament to the team’s resilience, she still believes that the “team’s got a lot of work to do.”

The Lions will face Buffalo on Nov. 15 near Niagara Falls. Tipoff will be at 7 p.m., live on ESPN 3 and ESPN Plus.