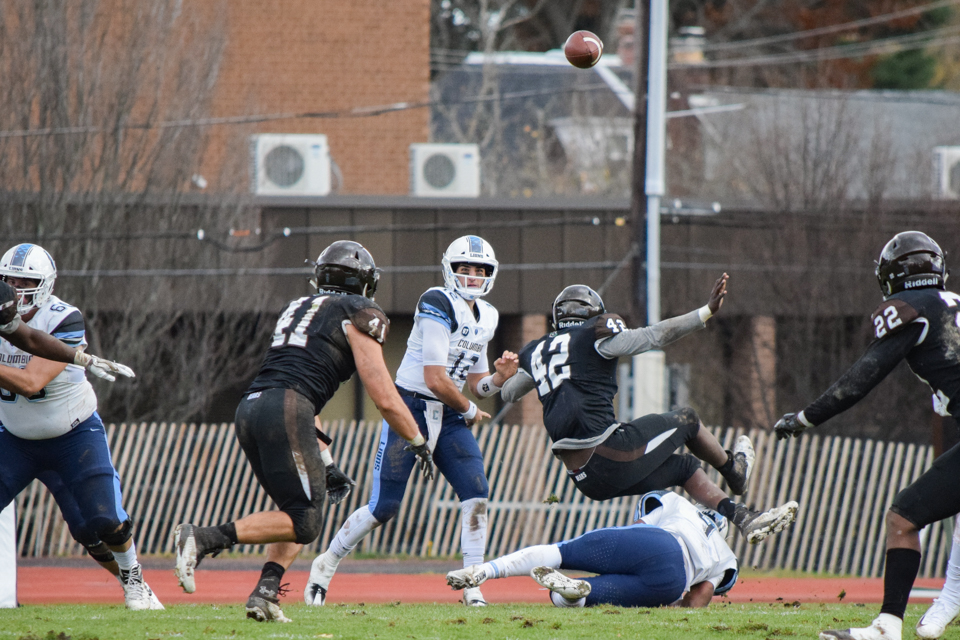 In order to achieve a .500 record for the season, the Lions must defeat Brown and Cornell, the two lowest-ranked teams in the Ivy League.

Eight weeks into a season that has primarily felt like a disappointment, the Lions may have finally found a rhythm in last week’s thrilling 17-10 overtime victory against Harvard.

With only two games left in the season, Columbia only needs to defeat the two teams at the bottom of Ivy League standings to finish .500 on the season.

This final stretch of the schedule starts this Saturday against the bottom-dwellers of the Ivy League table, Brown (1-7, 0-5 Ivy). In last year’s matchup, Columbia (3-5, 2-3 Ivy) emerged with a 42-20 victory over the Bears, which should bode well for the Lions this time around. For the seniors on this team who are playing their final home game, this is also their last chance to show the Columbia faithful who they are.

“Being out here for the last time on this home field, I’m sure it’s going to be pretty emotional after the game, but I couldn’t be more excited to go out there and play Brown and get this last win on our home turf,” senior receiver and captain Josh Wainwright said.

But while the Lions easily dismantled Brown a year ago, they will also be facing an entirely different team. In the offseason, Brown parted ways with head coach Phil Estes, who coached the Bears for 21 seasons and led them to three Ivy League titles in the process. However, Estes struggled to bring the Bears together in the past few seasons, as Brown has not won an Ivy League game since Nov. 12, 2016.

Head coach Al Bagnoli acknowledged that facing Brown without Estes will be a strange experience, as he described the longtime coach as one of his “best friends.”

“We’ll miss Phil. Fun guy to be around. A really good guy. A really good professional. A really solid individual,” Bagnoli said. “It’ll be different because it’s been a long time since we’ve faced Brown, and he wasn’t on the sidelines.”

Brown’s Director of Athletics Jack Hayes landed on Bryant University head coach and Brown alum James Perry to replace Estes. Prior to getting hired by Brown, Perry had led Bryant to two consecutive 6-5 seasons in which they averaged more than 30 points per game. Head coach Al Bagnoli described the hiring of Perry as “a great addition, unfortunately for us.”

While coach Perry has not been able to win a game against an Ivy League opponent, this Brown team is not as bad as its record would indicate. The Bears have come close to getting its first Ivy League win since 2016 in recent weeks, losing on last-minute field goals in back-to-back games against Penn and Cornell. For Wainwright, these results show that Columbia cannot underestimate the Bears.

“You can’t overlook any opponent on your schedule, regardless of who it may be,” Wainwright said. “Brown, while it may not show up in their wins and loss column, they have a really talented offense and when they put it all together, a really talented team.”

The “really talented offense” for the upcoming game will include the Bears’ new addition, recent transfer and former Boston College backup quarterback E.J. Perry IV, who is also the head coach’s nephew. Bagnoli described getting the younger Perry to transfer as “the biggest recruit he had” and knows that slowing him down will be crucial to stopping the high-speed Brown offense.

“He’s a dynamic thrower, runner, competitive guy,” Bagnoli said. “The thing that impresses you about him is he himself is not only good but he makes everybody around him better, and that offense is playing with such confidence now and so much better precision and so much high expectations, and that’s really a reflection of both Perrys—the coach and his aggressive style and the nephew and quarterback and his ability to do all the things he has been able to do.”

Unfortunately for the Perrys, they will be up against the Lions’ ferocious defense led by senior defensive lineman, Daniel Delorenzi. In last year’s matchup, Delorenzi’s 2.5 sacks made it his best game of the season. While Columbia’s all-time sacks leader will likely not finish with as many as he did last year, the Brown game will provide him a chance to add on a few more to his career total.

This year, Brown has given up twice as many sacks against Ivy League opponents as any team in the Ancient Eight. While Bagnoli largely attributed this to Brown running the most plays in the Ivy League, Delorenzi described Brown as having “not the best line we’ve faced.” Delorenzi is planning on taking advantage of that weakness by going out on Wien Stadium for the last time and giving it everything he’s got.

Delorenzi ascribed his success last year against Brown to “full sending it off the edge and really just trying to go full speed with everything.”

“I think that’s going to be the same deal this year. Just trying to turn up the jets full speed,” he said.

The Lions take on Brown at Wien Stadium with kickoff scheduled for 1 p.m. on Saturday. The game can be streamed live on ESPN Plus.