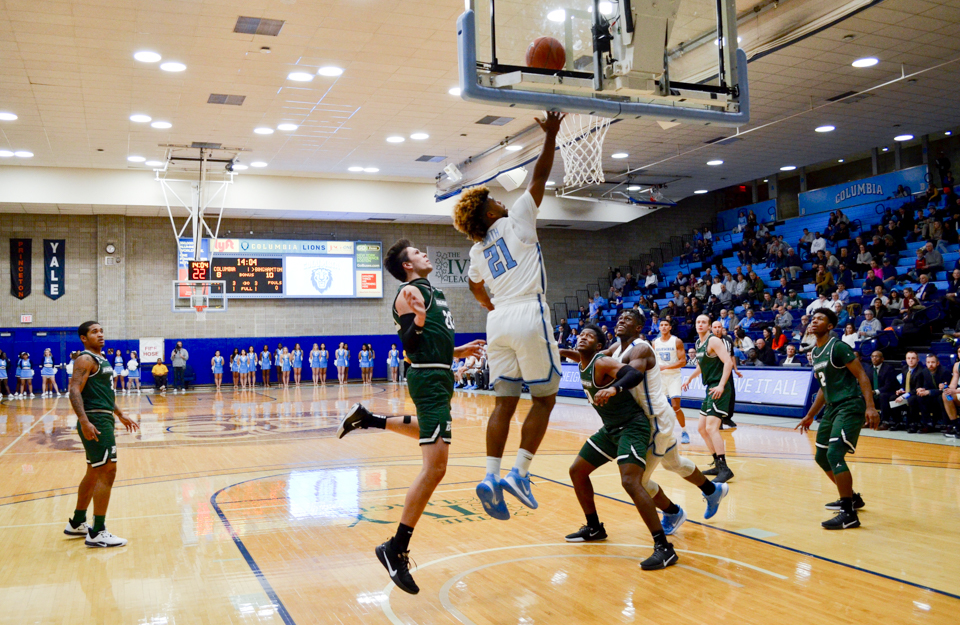 The Lions have a combined point differential of plus eight through their first three games.

Each of Columbia’s first two games ended in heartbreaking fashion, falling by just two points in both contests against Lafayette and Wake Forest. After the tough two-game stretch on the road, Engles breathed a sigh of relief after Columbia defeated the Binghamton Bearcats 75-63 to secure its first victory of the season.

The Light Blue was led by senior point guard Mike Smith, who has consistently assumed the role since his return from last year’s season-ending injury, and the formidable interior duo of junior forward Randy Brumant and sophomore forward Ike Nweke.

The win comes without the presence of Second-Team All-Ivy League selection senior Gabe Stefanini, who is out with a left foot injury, and All-Ivy League honorable mention, junior forward Patrick Tapé, who left the team in the off-season.

Before tip-off even came, it was clear that the lively audience at Levien Gymnasium was in for an action-packed night of basketball. The evening began with a recognition of Smith becoming the 29th player in program history to score 1,000 points, a feat he achieved in Sunday’s loss against Wake Forest. After this, Smith sank a foul shot for an administrative technical foul against Binghamton.

Smith ran the show in the first half for the Lions, both handling the ball on offense and being given the tall task of covering Binghamton’s leading scorer, Sam Sessoms. This is the third game in a row where Smith has had to guard the opponent’s best player, a reflection of coach Engles’ trust in his point guard.

“Mike has done an outstanding job,” Engles said. “He’s playing like a big-time point guard. He’s really controlling the game offensively for us, and defensively, he’s really doing a good job on the team’s other best players, so there’s not much more I can ask from him right now. He’s been playing terrific.”

While Smith’s outside shot wasn’t falling tonight, as he finished 1-5 from beyond the arc, he found success in other facets of his game, as he finished with 19 points and nine assists. The Lions made use of their physicality inside, as Brumant and Nweke combined to score 21 of Columbia’s 37 points in the first half.

Nweke was enough of a force inside that near the end of the first half, the Bearcats started doubling him when he caught the ball in the post. The increased defensive pressure did not phase Nweke, as he coolly hit hook shots over the Binghamton defenders.

Smith nearly had a miracle three at the buzzer, which took a friendly bounce off the front iron before finding the bottom of the net. Unfortunately for the Light Blue, the shot was called off as it hit the shot clock. At the end of a back-and-forth first half, it was looking like the Lions were in for another closely contested match as the score closed at 37-33.

In the second half, Columbia started out going back to Nweke, who finished with 11 points and six rebounds. After finding him in the post on the first possession, Binghamton immediately went to double-team Nweke again, but Nweke turned to find Brumant cutting along the baseline, only for the ball to bounce out of his hands.

When Nweke was out, Brumant stepped up to provide the physicality the Lions were missing. In one stretch in the second half, Brumant used a drop step to open himself up for an easy hook shot, blocked Binghamton’s George Tinsley on the other end before finishing a lob pass from Smith on offense to extend Columbia’s lead from 45-41 at the beginning of the sequence to 49-41 by the end of the sequence.

For Engles, Brumant’s improvements over the off-season have proven crucial to Columbia’s success.

“Randy’s really expanded his game,” Engles said. “Last year, he got a tremendous amount of experience for us. He’s become a real good glue guy for us. When he plays well, we play well, and I know that’s a lot of responsibility for him.”

The Lions pulled away for good midway through the second half with a run of hot shooting from first-year guard Jack Forrest. Forrest hit four threes in a three minute and three second stretch, all seemingly from the exact same spot at the top of the key, with the last dagger putting Columbia up by 15 points. After the game, Engles expressed how impressed he has been by the first-year’s performance, including his 4-4 performance from deep against the Bearcats.

“That’s why we recruited him. We expect him to be that type of player,” Engles said. “He’s a big-time shooter. It’s great for him. He’s been getting more and more experience on the court. When he shoots like that we become a pretty dangerous team, so I’m very happy.”

While a 1-2 record is not a start to write home about, Columbia has reasons to be optimistic. The Lions have a combined point differential of plus eight through their first three games, and this is without Stefanini, whom the Light Blue is expecting to get back in January according to Engles.

Columbia’s next game is against defending NCAA champion and No. 9 ranked Virginia Cavaliers on Saturday, Nov. 16 in Charlottesville.