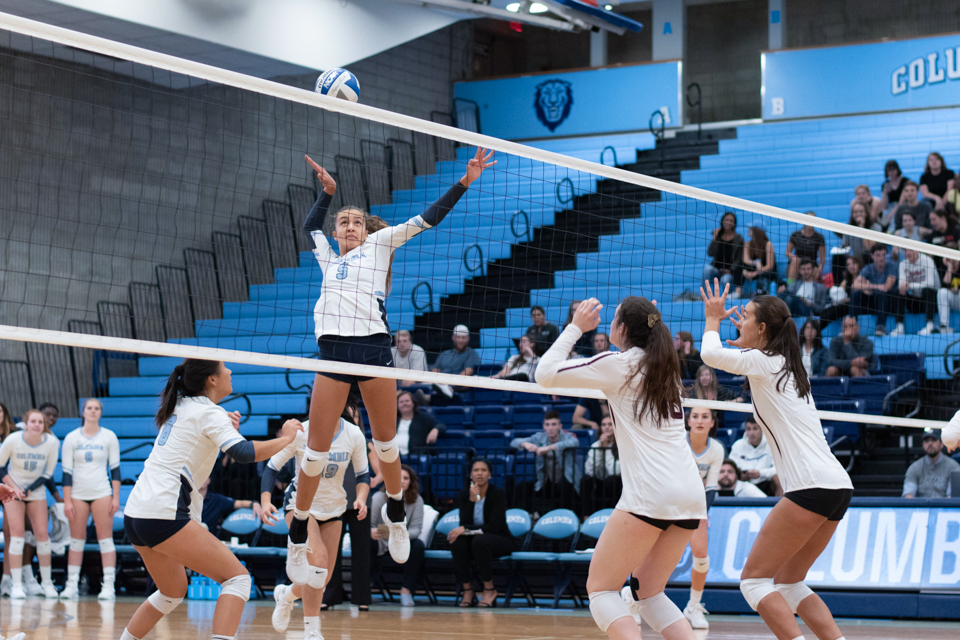 The Lions went 12-12 overall, breaking even for the first time since their last winning season in 2016, and won five Ivy League games to tie for fourth in the conference.

Volleyball split its final games of the season, losing 3-2 at Dartmouth on Friday and then winning 3-2 at Harvard on Saturday in a tenacious effort to end the season on a high note. The Lions went 12-12 overall, breaking even for the first time since their last winning season in 2016, and won five Ivy League games.

This weekend’s games mirrored each other in a variety of ways. In both, Columbia dominated the first set, the opposition came back after deficits to force a deciding fifth set, and the Light Blue trailed late into the fifth.

In Friday’s game against Dartmouth, the Big Green did not let its foot off the gas, winning the last three sets of the match and dominating the fifth set 15-12 in a reverse sweep to complete the upset.

The Big Green entered the weekend as the second weakest offensive team in kills, assists, and hitting percentage in the Ivy League. Its first two sets established the tone of the game, with the team hitting under .150 in both.

Senior middle blocker Chichi Ikwuazom put down eight blocks in the first two sets, helping the Lions control play with her infectious energy. When she put down a block for the Lions’ 34th point of the second set, earning them a 34-32 set win deep into overtime, the Light Blue bench exploded with cheers, while the Big Green bench sagged.

But something changed for Dartmouth in between the second and third sets. Facing elimination, it hit a shocking .440, launched four aces, and took advantage of Columbia’s two service errors to carry the set. The last two sets told a similar story. For the conference’s worst offense over the last three sets, the Lions allowed a .337 hitting percentage, with the team outplayed and exhausted. Head coach Allison Keeley said the service was to blame.

It was an entirely different story at Saturday’s game against Harvard, during which Columbia came roaring back from a four-point deficit in the middle of the final set with a 9-3 run, eventually winning the game 16-14 in overtime. It was a strong recovery after a demoralizing performance against Dartmouth.

“We went after them with our serving, we had some great serves that took them out of their offense and … forced them into making errors,” Keeley said. “We did to them what Dartmouth did to us.”

While facing Harvard, the exhausted Lions needed a spark to get going. The Crimson finished last in the conference this year, but fought back after Columbia took the first set in overtime, pushing the second set to extra points and clinching it. After Harvard dominated the third set 25-16, the Lions needed a player to step up.

And senior libero Kalie Wood did. She recorded 24 digs on the night—while Harvard’s top diggers had 10—and sprawled in front of the net to save a sure kill during the third set. Then, first-year outside hitter Kiara Robichaud made a difference at the end of the fourth set, holding serve for six straight points, including two aces. Where the service faltered against Dartmouth, it shone against Harvard. In the fifth and final set, the Lions took advantage of Harvard service and attack errors as Ikwuazom pushed the Lions to a comeback win.

The win against Harvard lifted Columbia out of back-to-back losing seasons. Keeley said this milestone was important because it showed Columbia’s first-year class how to win, setting it up for successful future seasons.

“I think the younger kids are learning to win,” Keeley said. “They have an expectation of being successful in this conference, and they now are empowered to know they can do it. … They’re off to a great start.”