After a week of disappointment, Lions look to close the season on a high note

After a week of disappointment, Lions look to close the season on a high note 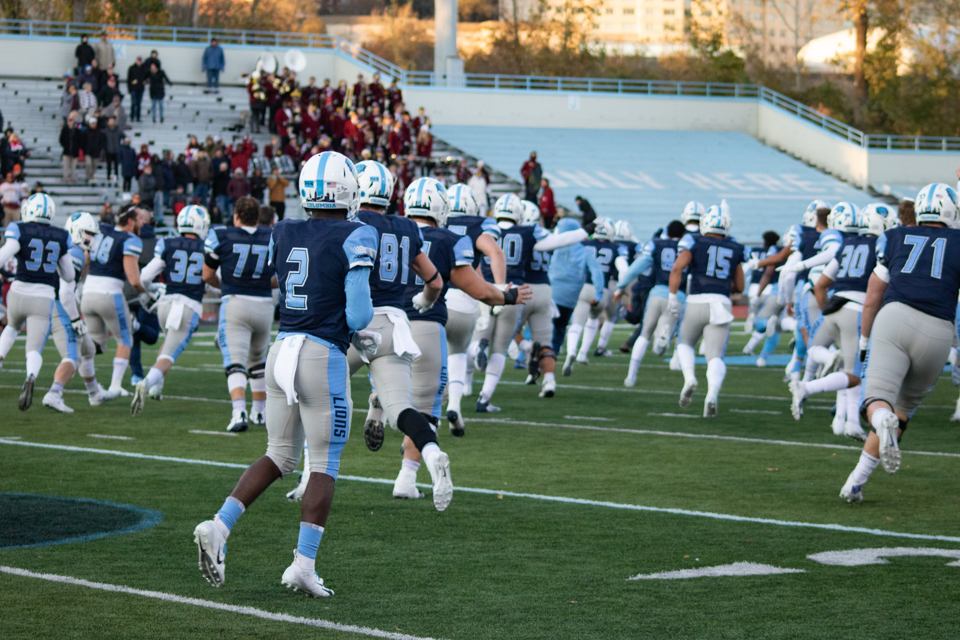 If the Lions lose against Cornell, they might end their season last in the Ivy League.

With its season coming to a close, Football has one final chance to try to find a silver lining in a season that has not gone as planned. If this Saturday’s bout against the Cornell Big Red is anything like last year’s, the Lions could once again enter the off-season feeling optimistic for what’s ahead.

Columbia (3-6, 2-4 Ivy) and Cornell (3-6, 2-4 Ivy) come into Saturday’s matchup with identical records and similar ways of getting there, as the two squads have fielded the lowest-scoring offenses in the Ivy League. Because of their records, the results of this game have massive implications in Ivy League standings, as the winner will finish as high as fourth place and no lower than fifth. If Columbia loses to the Big Red, it could finish last in the conference.

The similarities between the two intrastate rivals will only intensify what is already the closest thing to a rivalry for the Lions, as this season marks the 10th iteration of the Empire State Bowl. Despite the Empire State Bowl trophy being at stake, senior cornerback Ben McKeighan cares more about rising in the conference standings.

“Coach Bagnoli always talks about collecting hardware,” McKeighan said. “I think it’s important—whether it’s a rivalry game or not, since it has that title—you want to collect the win, but more importantly, it’s an Ivy game, and it’s our seniors’ last game.”

While these two teams have both struggled on the offensive side of the ball, a lethargic offense did not hold the Lions back in last year’s matchup, as a miraculous special teams performance from then-first-year kick returner Mike Roussos propelled Columbia to a thrilling 24-21 victory over the Big Red.

In that game, Roussos’ 91-yard punt return touchdown gave the Lions a jolt in the first quarter that was crucial in holding Cornell to only seven points through the first three quarters. Despite the solid defensive performance, the Big Red stepped up in the fourth quarter, scoring two touchdowns, including a two-yard run from starting quarterback Dalton Banks, to put Cornell up 21-17 with less than a minute remaining in the game.

However, Roussos’ big day was not done. After scooping up the ball at the 13-yard line, Roussos proceeded to maneuver his way through the Cornell defense before finding daylight to stun the crowd with an 87-yard, game-winning kickoff return. While Roussos is certainly the fulcrum of these plays, he was quick to give his teammates credit for his success.

“It’s definitely not a single man job. I can’t do it by myself,” Roussos said. “It’s with everyone that’s blocking and helping me get yards. So I think I bring something to the table, and everyone else brings what they bring to the table.”

This year, however, the Lions cannot simply lean on the strength of their special teams and expect to win. This Cornell team has proven that it can compete with the best teams in the Ivy League, as evidenced by last week’s 20-17 win over previously undefeated and 12th-ranked Dartmouth. For head coach Al Bagnoli, this win shows how serious a challenge Cornell is for the Lions.

While Cornell was triumphing over the Big Green, Columbia found itself on the losing end of another game, falling 48-24 on Senior Day to Brown, which had not won an Ivy League game since 2016. Bagnoli called the game a total failure on all sides of the ball and hopes that this week, the Lions can forget about last week and get back to basics.

“You’ve got to put that game in the rearview mirror,” Bagnoli said. “We’re a very workman-like team, so we don’t have high margins of error right now based on everything that’s happened to us. And the message has been that we’ve got to get back to who we are. We’ve got to get back to working hard on Tuesdays and Wednesdays and Thursdays, and if we do that, then that gives us a much greater opportunity to win on Saturday.”

The Lions take on Cornell at Schoellkopf Field in Ithaca with kickoff scheduled for 1:30 p.m. on Saturday. The game can be streamed live on ESPN Plus.