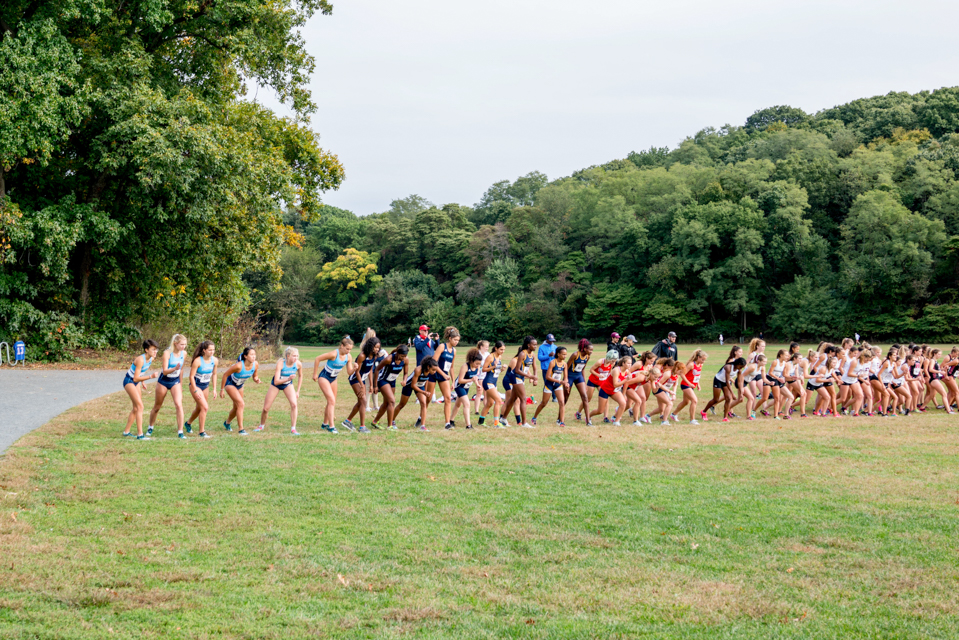 Senior Katie Wasserman and junior Allie Hays have led the Light Blue all year, and Nationals was no different: Wasserman captured 75th place with a time of 21:06.0 in the 6k race. Hays was hot on her heels, finishing in 21:09.4, good for 84th place. Both runners improved from last year’s showing at the event, which saw Hays come in 101st and Wasserman take home 120th.

Another high point for the Lions was the performance of senior Emily Acker, who capped her career with a 22:00.7 and finished in 194th place. Meanwhile, sophomore standouts Linnaea Kavulich (200th) and Sofia Camacho (224th) earned times of 22:05.3 and 22:24.5, respectively. Senior Bianca Alonzo ran a 22:47.5 and placed 241st. Director Daniel Ireland noted the pride the Lions felt while competing at Nationals despite finishing outside of the top 25.

“While they did not have the result that we were hoping for, they competed hard and for the third year in a row finished among the top 30 programs in the nation, which we are extremely proud of,” Ireland said.

The University of Arkansas edged out Brigham Young University for top honors at the national meet, earning a score of 96 to the Cougars’ 102. Weini Kelati of New Mexico was crowned NCAA champion with a scorching 19:47.5.

BYU, who claimed the men’s 10k race with 109 points, had little to worry about, as second- and third-place Northern Arizona and Colorado trailed well behind with 163 and 164 points apiece. The men’s winner was Iowa State’s Edwin Kurgat, whose 4:54.9 mile pace put him 5 seconds ahead of second-place finisher Joe Klecker of Colorado.

Meanwhile, at Van Cortlandt Park, the women who didn’t make the trip to Terre Haute and the men’s squad concluded their seasons at the IC4A/ECAC Cross Country Championships, where 18 women’s teams and 16 men’s teams from the northeast region gathered in the Bronx on Saturday.

In the men’s race, first-year Tyler Berg, who made an impression early in the season with a top-20 finish at the Roy Griak Invitational, continued to shine. Berg jumped to the front of the pack immediately after the gun and didn’t look back. As the gap between runners widened, Berg maintained top positioning of a three-member leader pack. Two more runners trailed as the leaders completed their first loop of the park.

By the time the racers reappeared for the final stretch, Berg had shaken off the other two runners and sailed into first. Iona’s Joshua DeSouza looked back to check for confirmation of second place, well aware that he wouldn’t be passing Berg.

With standouts Wasserman and Hays gone for Nationals, first-year Angela Saidman and senior Emily Digman led the women’s team to an eighth-place finish in a field of 18 teams.

Digman converted her quick start into a powerful first mile. As the runners began their foray into the woods, she was part of a three-member pack in pursuit of Providence’s top three runners, whose near-flawless performance never faltered. But by the time the runners came up the final stretch, Digman had dropped back, replaced by Saidman. The first-year finished in 16th, while Digman earned 23rd.

Providence’s sweep of the top three places, along with an additional 11th place finish by its fourth runner, locked up the women’s team title. The dominant team also claimed first place in the men’s race, with four runners finishing inside the top 10. In addition to Berg’s and Vorbach’s strong performances, sophomore Pat Bayeux, junior Dominic Dyer, and junior Owen Bishop all contributed to the Lions’ second-place finish.

With plenty of young talent exposed early on to competition, the Lions have set themselves up well for next year. In particular, sophomore Sofia Camacho, who won her first collegiate cross country race, and Berg are racers to keep an eye on. Unfortunately, the Lions will lose seniors Wasserman and Vasbinder, who have been integral members of the team for the past two years.