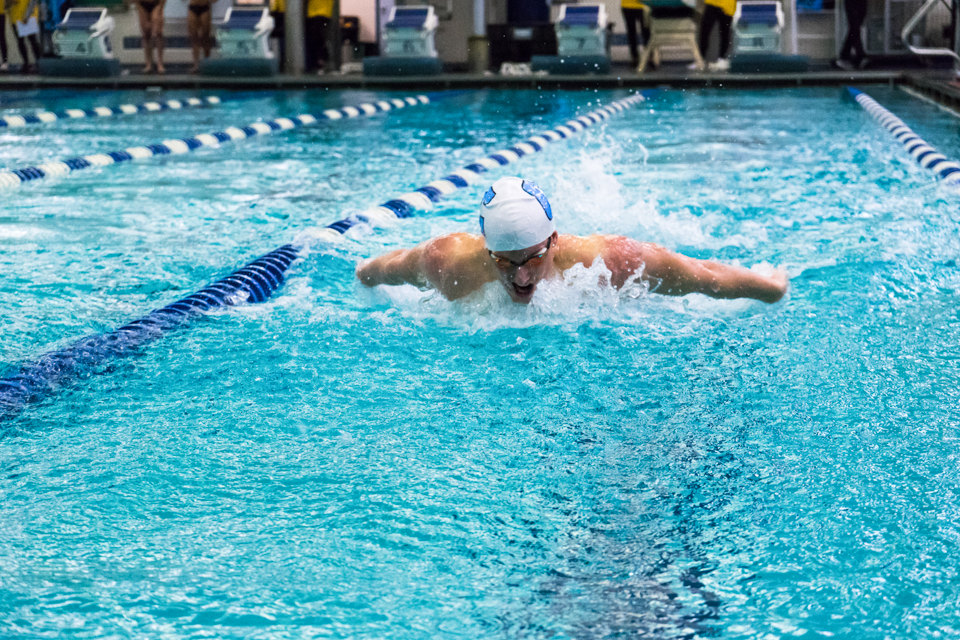 This is Columbia’s 14th straight dual loss to the Crimson, although it put down its smallest margin of loss since 2013.

Men’s swimming and diving was smoked by the Ivy League’s best on Friday, losing to Harvard 169.5-129.5. While the Lions eked out wins in medley and freestyle sprinting events, they were swept in the freestyle distance and diving events. This is Columbia’s 14th straight dual loss to the Crimson, although it put down its smallest margin of loss since 2013.

Senior Nian-Guo Liu said the racing represents a gigantic step up from last year, when the Lions lost 216-83 after the Crimson won every one of the 16 events.

“It was great,” Liu said. “Harvard’s the best in the league. Last year we didn’t win any events, [and] this year we won [five] out of sixteen, so it was really good. The whole team brings a lot of energy.”

With the Crimson coming off their its consecutive Ivy League title and an eighth-place finish at the NCAA championships, coach Jim Bolster said it was important to have realistic expectations.

“Going into the meet, we knew that there was a chance that there were probably four events that they could sweep us in, go 1-2-3, and that’s a 64-point deficit,” Bolster said. “So to think that we could make that up, no matter how well we swam, was not very realistic.”

The Light Blue was swept in four events, including both diving contests. First-year Ben Blizard, one of the best performers on this year’s exceptionally young diving squad, was merely 0.6 points away from third place in the one-meter dive, but couldn’t quite get there.

The near-misses were constant throughout the meet for the Lions. One week after first-year Ray Yang sprinted to a comeback win against Yale in the 200 butterfly, he finished second, just over a second behind Harvard’s top swimmer.

Junior Albert Gwo dominated the 50-yard freestyle but was edged out in the 100 freestyle by 0.17 seconds. Bolster said the Lions could have won that race even though Gwo “wasn’t quite as sharp as he’d been last Saturday,” when he set a dual meet pool record in the 50 freestyle.

“There were a lot of close races,” Bolster said. “The score is not indicative of how close a lot of the races were.”

With two events to go, Harvard was up by 75 points. Even during the penultimate event, the 200 IM, it looked like the Lions could be swept again. Halfway through the medley, Liu, the Lions’ top competitor, sat in fourth place. But he was close to the top three and dominated the last two laps, the freestyle portion of the medley, with an intense sprint to win by over a second.

“To be honest, I wasn’t too aware of the people around me, just the guy on my right,” Liu, who won four races, said. “When the pressure [was] applied, I was just trying to stay as close as possible because I knew in the last 50 I could get him.”

Then, Liu got back in the pool to swim anchor on the dual’s final event, the 200-meter freestyle relay, which the Lions won. These final two wins tightened the deficit from 75 points to 40. For Bolster, the push at the meet’s end just represents another way the swimmers raced hard and stepped up against Harvard.

“They’re a good team but so are we, and it was just important that they realize that and race well,” Bolster said. “I’m just really proud of their effort and I think it’ll pay off when it counts the most, down the road at Ivies.”

Men’s swimming will travel to New Jersey to take on teams from around the country at the Princeton Invite, a three-day extended meet which begins at 10 a.m. on Friday, Dec. 6.