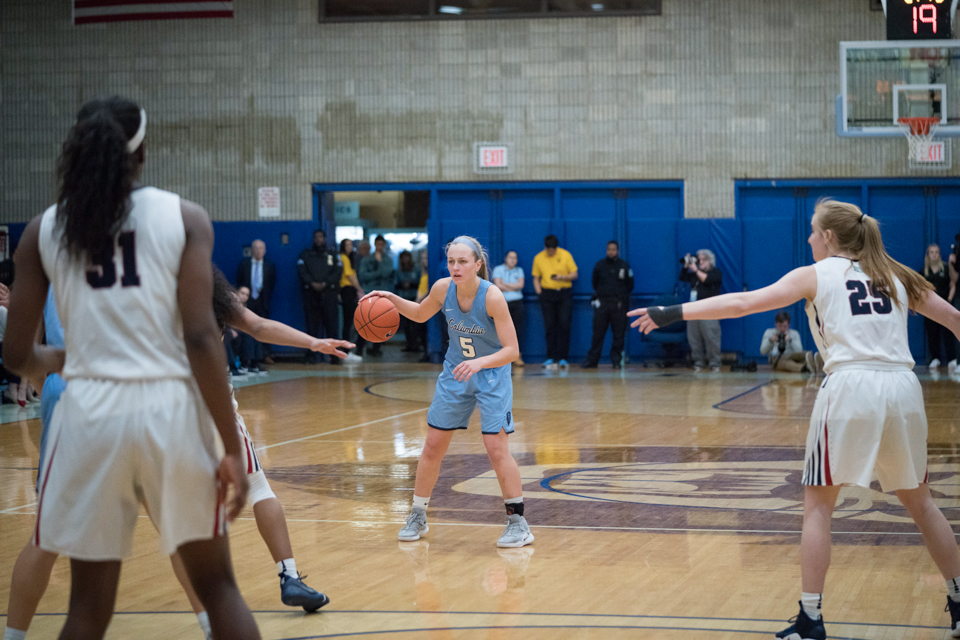 The Light Blue’s defense restricted Milwaukee to a field goal percentage of 34.5 and just 12 percent from the 3-point line.

Women’s basketball dominated the Milwaukee Panthers 74-46 the Saturday after Thanksgiving to complete a three-game winning streak, its first since December 2017. The Lions (4-3) lost to Milwaukee (2-5) last season by 13 points, 78-65, but a much better defense this season meant that Milwaukee lost by 32 fewer points.

The Light Blue’s defense restricted Milwaukee to a field goal percentage of 34.5 and just 12 percent from the 3-point line. The Panthers could not find their rhythm in the frontcourt, making nine assists while turning over the ball 19 times. The perfect defense, plus an efficient offense with nine 3-pointers, allowed Columbia to never relinquish the lead from the second minute of the first quarter on, reaching a lead of 32 points in the fourth quarter.

Sophomore forward Hannah Pratt began the game with a hot hand and got eight first-quarter points on a perfect 3-for-3 shooting, including two early 3-pointers to propel the Columbia offense. Pratt was “really happy” about her performance in the game and attributed her good form to continuous shooting practices in the past weeks.

“She’s the hardest worker on this team, and it’s always great to play with hard workers,” Pratt said.

Markham finished the game with nine assists, the same number as the whole Milwaukee team, and also shot 66.7 percent from the field to contribute 11 points to the victory. She overshadowed her guard matchups, Tadri Heard and Jamie Reit, who combined for 4-for-17 from the field and one assist.

Coach Megan Griffith thought that Markham’s aggression made the game easy for the Light Blue’s offense.

After Pratt built the lead for Columbia in the first quarter, Milwaukee temporarily fought back early in the second, reducing the deficit to four points with an 8-0 run. Markham stepped up to hit her first 3-pointer after the timeout to initiate a 13-2 run to conclude to the second quarter, and the game went south for the Panthers from there. The Lions scored 20 points in the third quarter while the Panthers continued to struggle on offense, making it their third four-field-goal quarter, scoring just 10 points, and the lead came to 25 as the buzzer sounded.

Senior guard Janiya Clemmons continued to produce for the Light Blue, finishing with a game-high 13 points and four steals. Clemmons has been the defensive anchor for the Lions on the perimeter so far, averaging 1.9 steals, and she helped the Lions to limit their opponents to shooting just 12 percent from long range.

On the other hand, sophomore forward Sienna Durr had a cold afternoon with her only field goal in the third quarter. This season, Durr is still second in scoring on the team, but she has converted only 37.3 percent of her shots, 11 percentage points lower than last season. Griffith wasn’t too concerned about Durr’s slow start, though.

“I don’t know if I’d classify it as slow, more like she’s like ‘We have more weapons, we have more players,’” Griffith said. “If you look at our stat-sheet this season, it’s all over, it’s spread out. For us, that’s what’s going to make us good.”

“I’m proud of her defensive effort because she’s really put in a lot of focus and attention on that side,” she added.

Even though the lead was big in the second half, Columbia remained vigilant, putting in its best effort on defense every possession.

After securing the three-game winning streak, Griffith said that she was happy to be on it, but that the team must keep improving.

“All we are trying to have [the team] focus on is right now: What’s in front of us, how do we learn from yesterday, how can we be better tomorrow,” Griffith said.

The Lions will host Georgetown on Dec. 6 at home. Tipoff will be at 11 a.m. and the game will be broadcast on ESPN Plus.