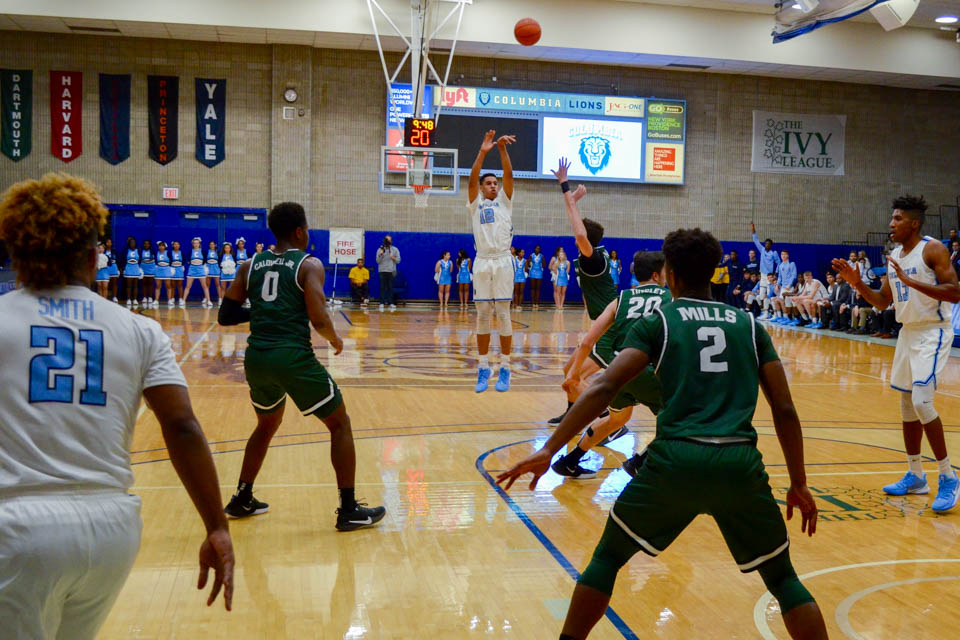 Columbia men’s basketball downed Lehigh in a nail-biter that saw 11 lead changes throughout the contest.

After a four-game road trip during which the Columbia men’s basketball team finished 1-3 and was defeated by an average of 20.33 points in each loss, the Lions picked up a much-needed 68-64 win over the Lehigh University Mountain Hawks at Levien Gymnasium on Saturday, Nov. 30.

Saturday’s game was tightly contested throughout, with both teams relying on their star point guards to handle the bulk of the scoring. For Columbia (3-5), it was once again the Mike Smith Show, as the senior guard finished with a season-high 30 points for his fourth consecutive game in which he scored more than 20 points. Smith was also given the tall task of guarding 2018 Patriot League third-team selection Jordan Cohen, who led the Mountain Hawks with 20 points.

Smith set the tone early by scoring the first two buckets for the Lions on midrange jumpers. Lehigh did all it could to stop the 5’11” Smith, but its efforts were to no avail. The Mountain Hawks tried to match Smith up with taller guards such as 6’4” Reed Fenton, 6’4” Marques Wilson, and even 6’6” Evan Taylor, but Smith countered this strategy by utilizing a variety of dribble moves and sharp midrange shooting.

Although Smith was the best player on the floor throughout the entire game, he saved his strongest efforts for when Columbia needed him the most. Up by two points with less than six minutes left to go, Smith rose up above Wilson to nail off the dribble, which put the Lions up by 5. Smith would go on to score the final eight points for the Light Blue.

At times, Lehigh head coach Brett Reed tried slowing Smith down by sending double teams at him on pick and rolls. However, when the defense attempted to smother Smith, he utilized his vision by finding and setting his teammates with good passes all over the floor.

In the two minutes Smith rested, Columbia got solid production out of junior point guard Luke Bolster, who had not seen much action in the game. Bolster nailed a 3-pointer with seven minutes and 35 seconds left in the first half, giving Columbia its first lead of the game. For Bolster, the 3-pointer was even more significant, because it was his first basket made this season.

Games as close as this one, which saw 11 lead changes, often lead to controversy later in the stretch, and this was no exception. Late in the second half, with the Mountain Hawks down by four, Cohen drove past senior guard Jake Killingsworth before sinking a layup as he collided with junior forward Randy Brumant. While there was certainly a foul, the Hawks argued that it appeared as though Brumant was still moving as Cohen bowled over him. Ultimately, the call went against the Mountain Hawks and gave Columbia the ball back up three with 35 seconds left.

The Lions also saw another strong game from first-year guard Jack Forrest, who was recruited for his soft stroke from beyond the arc but has found playing time early because of his ability to acclimate quickly on the defensive end. Forrest finished with 10 points on 4-8 shooting and was the only Lion besides Smith to reach double figures. Additionally, he showed off the defense that head coach Jim Engles touted earlier in the season when, midway through the first half, he blocked Lehigh’s Jakob Alamudun on what looked like it would be an easy runner.

The Light Blue had more trouble finding scoring on the interior as the primary rotation of big men consisting of Brumant, junior Joseph Smoyer, and sophomore Ike Nweke combined to finish 4-12 from the field for only 10 points. However, the big men made up for their futility on the offensive end with suffocating interior defense. The trio combined for six blocks, highlighted by three rejections from Smoyer, the tallest player in the game for either side at 6’11”. If the Lions want to compete in the Ivy League this season, these three need to maintain their solid defensive play.

On Monday, the Lions lost 84-76 to the undefeated University of Delaware. They take on Bryant University at the Chace Athletic Center in Smithfield, Rhode Island on Friday, Dec. 6 at 7:00 P.M.