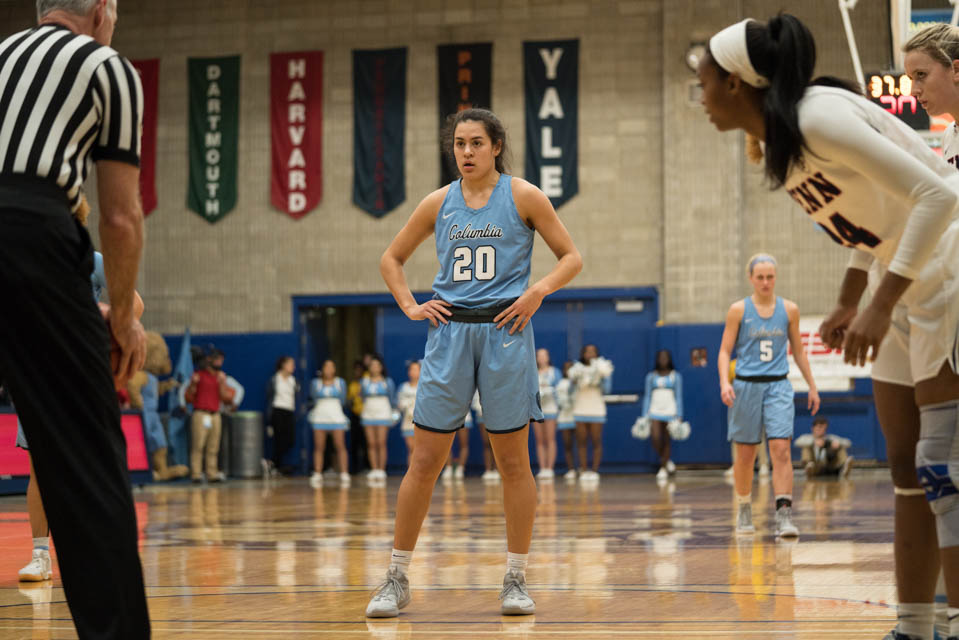 The Light Blue out-rebounded the Hoyas 59-45 and grabbed a total of 17 offensive rebounds, resulting in a 15-8 lead in second-chance points.

Women’s basketball edged a 5-point victory over Georgetown in a defensive 54-49 showdown on Friday afternoon, improving its record to 5-3. With this win, head coach Megan Griffith brought the team to a four-game winning streak in front of 2,400 young fans on the program’s 12th annual Education Day, its first streak of such caliber since Griffith’s first season at Columbia in 2016.

Georgetown has not had a losing season since 2014-2015, but left Levien with a 2-6 record after its defeat to the Lions. Georgetown played its most inefficient game under Columbia’s defensive pressure, making just 19 out of 71 shots. On the other hand, Columbia couldn’t find its rhythm either, shooting just 31.8 percent from the field, its worst of the season as well.

The Lions were the better team at capitalizing on the misses, however. With more active hands, the Light Blue out-rebounded the Hoyas 59-45 and grabbed a total of 17 offensive rebounds, resulting in a 15-8 lead in second-chance points. First-year forward Kaitlyn Davis produced a double-double with 15 rebounds in her first game back, having missed the last two due to concussion protocol, according to announcers. Davis crashed the glass seven times in the fourth quarter, including a crucial recovery with 38 seconds left in the game to retain possession for the Lions, and went 1-for-2 from the charity strip to increase the lead to 3.

Sophomore guard Mikayla Markham said that Davis was key in the closing minutes of the game to getting free-throw chances for the Light Blue.

“If you look at how we got those foul shots, K.D. made some great plays, 50-50 balls, winning those and got to the line, so I would say those were big plays,” Markham said.

Markham had a good game herself, putting up nine assists in back-to-back games. She was in a shooting slump earlier in the game, going scoreless in the first half, but when the Lions needed her in the clutch, she stepped up with an answer to Georgetown guard Taylor Barnes’ 3-pointer to beat the shot clock while the elementary school students—invited to watch the game as part of an annual tradition—roared in the bleachers. Markham herself didn’t emphasize the shot too much after the game, saying it was just a natural reaction to the clock, but her shot triggered a 12-4 scoring run for the Lions to close out the game.

“We have a lot of people who are dangerous offensively, and [they] put themselves in spots where I can find them,” Markham said. “I’ll just say we are hitting more shots. That’s what [the nine-assist performance] is a culmination of.”

However, Griffith thought Markham’s performance was much more important to the Light Blue’s win than Markham herself claims.

“I think [Markham’s] the reason that this program is taking off to a different place because she’s aggressive, she’s tough, and she’s thinking more like us right now, and that’s what’s going to let you take your hands off some more and let them play,” Griffith said.

Looking at Friday’s game from a macroscopic perspective, the Lions seemed to repeat their wins over Robert Morris and Army: In all three games, they were down early and completing a comeback at the end. In the first quarter, the Lions had seven turnovers, and during its largest lead, Georgetown was ahead by nine points. After talking it over during the break, the Light Blue limited its turnover to two in the second quarter and allowed the Hoyas only two shots. In the fourth quarter, the Lions maintained composure and had just one turnover, outscoring Georgetown 17 to 11. Columbia secured 18 rebounds in comparison to Georgetown’s seven, and Griffith attributed the success to the team’s continuous effort in practice to secure 50-50 balls.

“This is a team that understands that if you string together good practices … it’s going to actually translate,” Griffith said.

Summing up the fighting experience in the past games, Griffith said: “We’re really learning how to find a way to win. … We have to be OK with the ugly moments to be great in the good ones, and I think for us right now, this is a total learning experience.”

Going into the winter break, the Lions will host Davidson College on Monday night. Griffith remarked that the game will be a “bloodbath” because of how similarly the teams play and how disciplined Davidson is. Tipoff will be at 7 p.m., and the game will be broadcast on ESPN Plus.