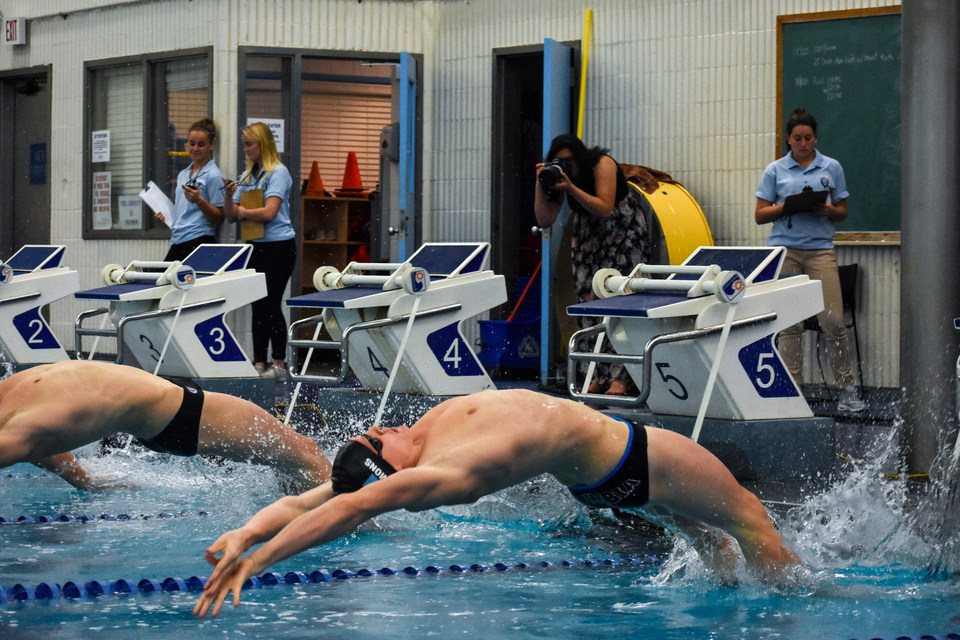 After a 10-hour flight across five time zones and two conference meets in one week, a tired men’s swimming and diving team won a close meet before securing its worst loss of the season.

The men’s swimming and diving team began their 2020 season jet-lagged and fatigued. After flying back from a training trip to Hawaii on Sunday, Columbia topped Cornell, which has won only one Ivy meet this season, at home 167-133 on Tuesday, but fell on the road to Brown 186-114 on Saturday.

On Tuesday, Jan. 14, the Lions, tired from an intensive winter break trip to Hawaii and a 10-hour flight, were still adjusting to the relatively chilly climate and the difference in time zones.

“Most of us had trouble getting used to the time zone changes between Hawaii and here,” junior Albert Gwo said. “We were all pretty fatigued. It was pretty satisfying to have the wins that we did. I feel like most of the people did really well and adjusted really well from the training that we had in Hawaii into competing.”

The match was the Lions’ closest margin of victory in a conference dual meet this year, and Cornell took advantage of Columbia’s depleted breaststroke and backstroke events to earn wins, including a sweep of the 100 backstroke.

Head coach Jim Bolster said that he decided to keep key breaststroke swimmers, including sophomore David Wang, out of the water because they were tired and dealing with injuries. In addition, junior backstroker Baptiste Leger, who dominated during first semester, underperformed, finishing seventh in the 100 and eighth in the 200.

In order to pull out a win, the Lions had to rely on help from unexpected quarters. For the first time ever, senior Nian-Guo Liu raced the 200 breaststroke and claimed a win in 2:00.14, over four seconds faster than Cornell’s Ryan Brown, who placed second. Sophomore Shawn Lou won an event for the first time in his collegiate career, carrying both the 1000 and 500 freestyle. And for the first time ever at Uris Pool, Gwo set a record in the 50 freestyle, completing the race in 19.71 seconds. Gwo’s record, along with a sweep in the 100 freestyle, secured victory for Columbia.

“Albert has been terrific,” Bolster said. “He’s a very, very hard worker, and he has great speed, and he’s really refined his start and his underwaters. And it’s really nice to see him have that kind of performance because … he’s worked really hard for it. And when you’re surrounded by somebody like that, it kind of wears off.”

Although Gwo and Liu shone again against Brown (3-4, 2-4 Ivy), most of the other Lions fell flat in Columbia’s first loss to the Bears since 2010. The Jan. 18 meet was Columbia’s first conference road trip of the season, and an energized Brown squad defended its pool on their Senior Day.

“We just didn’t look as sharp,” Bolster said. “We looked a little tired in the back half of most of our races, certainly in the last 50. We just didn’t have another gear that you needed to get the win.”

Led by its senior class, Brown swept both freestyle distance contests and won every backstroke, butterfly, relay, and diving event, but still handed Columbia its worst loss of the season. The only bright spots for the Lions were their upperclassmen. Gwo broke 20 seconds on the 50 freestyle for the fourth time this season, and Liu had his season-best performances to win the 200 freestyle and 200 IM, after winning the 200 breaststroke to keep Columbia afloat.

The Lions will recover this weekend before traveling to take on Navy on Friday, Jan. 31, at 2 p.m.