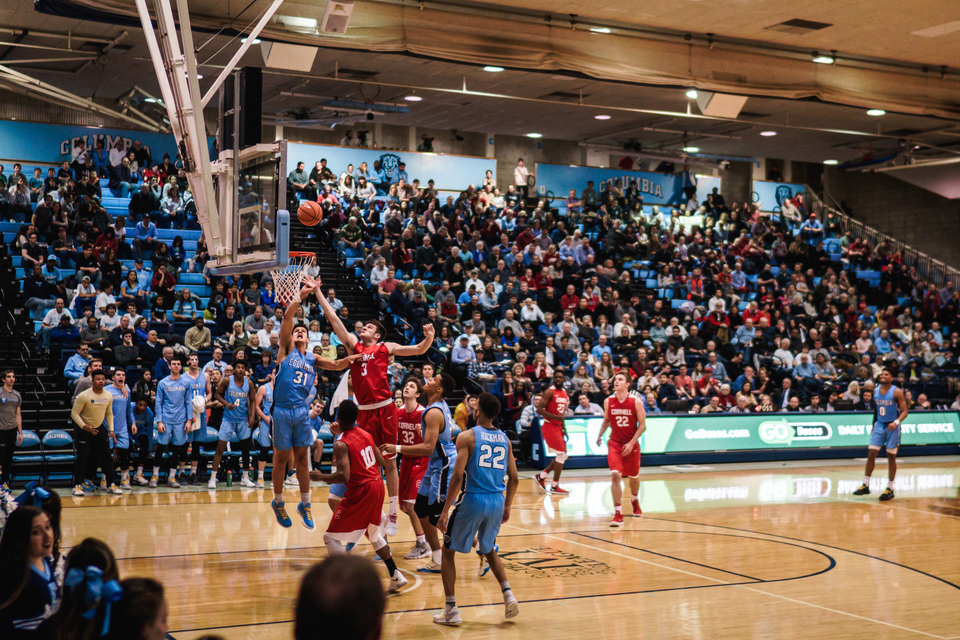 With the loss to Cornell, the Lions fell to 0-10 on the road this season.

In Saturday’s 62-50 loss to the Cornell Big Red, the Lions fell prey to one of the defining issues of the season––their inability to win on the road.

Through the first 18 games of their season, the Lions (6-12, 1-1 Ivy) have a 5-1 record at Levien Gymnasium and are an abysmal 0-10 away from their home court. This weekend in Ithaca, the team shot 31.7 percent from the field and 21.7 percent from the three, and an inefficient offense led to yet another road loss.

This is not the first time that a team led by head coach Jim Engles has struggled to win games on the road. In the 2017-18 season, Columbia finished 1-14 outside of Morningside Heights. For Engles, the team’s road woes this season meant that they were unable to get into a rhythm.

“We started off most of our games on the road, so it was hard to gain any momentum or confidence,” Engles said.

The team’s struggles were exemplified by its leading scorer, senior guard Mike Smith. Smith, who has averaged 31.8 minutes per game this season, did not see the bench once in this contest, despite shooting just 5-23 from the field and 1-6 from behind the arc. Although Smith struggled to get the ball in the hoop, coach Engles doesn’t want him to stop taking the shots that have made him the player that he is.

“He made most of those shots all year; he just had a tough game. … He needs to score for us to win and he needs to keep taking those shots,” Engles said. “For us to be successful, he needs to keep playing with confidence and doing what he’s been doing. You know, it’s just a bad night for us.”

Smith has largely been a nationally dominant scorer this season; his 20.7 points per game puts him in 15th place in the NCAA. However, in games like this where his shot did not drop, Columbia needed a secondary scorer to step up.

Unfortunately, the Lions had no such luck as first-year guard Jack Forrest, the team’s second-leading scorer, picked up two fouls in the first two minutes of the game, forcing Engles to sit him for the rest of the first half. For Engles, Forrest’s presence was sorely missed.

“We’ve relied upon him. He certainly makes us a more dangerous offensive team. We need him on the court,” Engles said. “So it’s just an unfortunate experience where he picked up two quick fouls and I didn’t want to put him back in the game.”

With Forrest missing for much of the half and Smith’s shot not falling as much as usual, junior guard Tai Bibbs had a chance to step up and show flashes of elite scoring ability. The Chicago native worked his way into the starting lineup after averaging 12 points per game over his last four contests. While Bibbs did not reach double figures in this game, he provided the Lions’ offense with a spark through plays like his spinning fadeaway on the baseline to give the Lions a 17-13 lead.

After the first half ended 24-22 in Columbia’s favor, Cornell’s hot shooting to start the second half allowed it to pull away. The Big Red started the second half going 5-6 from the field to take a quick 8-point lead. While Brian Knapp scored the first 5 points of the second half to catalyze the run, it was forward Jimmy Boeheim who carried Cornell to victory in this game. He led the Big Red with 18 points and 10 rebounds.

The Lions will have a chance to reverse their struggles on the road this weekend as they continue their Ivy League play next weekend against Yale and Brown. The Lions will next play Yale at John J. Lee Amphitheater in New Haven, Connecticut, on Friday, Jan. 31 at 7 p.m. The game can be streamed live on ESPN Plus.