Women’s basketball fails to repeat glory in Ithaca, loses to Cornell in overtime

Women’s basketball fails to repeat glory in Ithaca, loses to Cornell in overtime 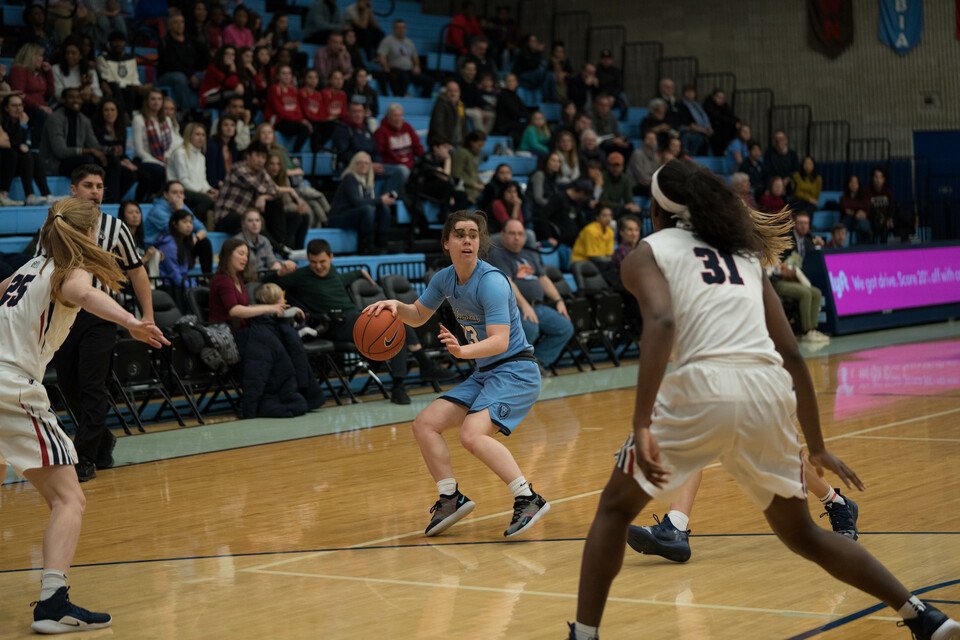 The tight game seemed to slip away from Cornell as it did a week ago on Jan. 18. This time, Columbia led 67-60 on senior guard Janiya Clemmons’ fast break layup, but Cornell went on an 11-4 run to finish the quarter and eventually come out on top.

Columbia (10-5, 1-1 Ivy) allowed many of the Cornell (8-6, 1-1 Ivy) players to dominate on the scoresheet. Big Red captain Samantha Widmann scored her 1,000th career point in the win, and guard Shannon Mulroy, who scored 16 points on the previous Saturday, led all players in the game with 27 points.

When asked about the Lions’ defense on Mulroy, coach Megan Griffith rated it a 1 out of 10, and highlighted “toughness, rebounding, [and] hustle plays” as the areas that the Light Blue most needed to improve.

“When we were competing, we were not smart all the time. I don't know about emotion, if there was a ton going on, and it was more just a lack of focus,” Griffith said. “That really hurt us in the end of the game and also in overtime.”

Weaker rebounding ultimately doomed the Lions in the rematch. Columbia was the sturdier team in last week’s win, out-rebounding Cornell 32 to 28. In the rematch, the Lions only grabbed 33 rebounds, while the Big Red crashed the glass 43 times, including 21 offensive rebounds. In one possession during Cornell’s 11-4 run the team collected three consecutive offensive rebounds, eventually scoring on the Lions.

Although the Lions lost in the rebounding game, their defense made life difficult for the Big Red. Since the start of the game, they pressed Cornell full court after almost every made shot or out-of-bounds play, forcing 21 turnovers and allowing just 39.4 percent of Cornell’s shots to go in. However, in the last three minutes, the defense lost its discipline, giving Cornell six crucial free throws to help its comeback. Women’s basketball also failed to take advantage of its good defense early on in the game, since it conceded 23 turnovers and shot just 26.9 percent from the three.

Both teams struggled from the field in overtime, but Cornell stepped up to the free-throw line eight times, in comparison to Columbia’s four. The Lions, who have the best perimeter defense in the Ivy League, allowed the Big Red’s Kate Sramac, a career 28 percent three-point shooter, to drain a long ball. It was Cornell’s only field goal in overtime, which gave it a 5-point lead with less than a minute left.

“I felt like [the Cornell players] were playing like it was their season on the line,” Griffith said. “For us, I think we got punched around a little bit, and we decided that we wanted to respond only at moments in the game.”

First-year guard Abbey Hsu, the reigning Rookie of the Week, still had a career game despite the loss as she scored 25 points, including five threes. When the Lions were down 68-69 in the final moments of the game, she hit her fifth corner three to give them the lead. The last play of the game saw her sixth attempt off an open turnaround barely miss the target.

When asked about how the team will prepare for the games against Yale and Brown, Griffith said, “[Yale] blew out Brown today, but they were in a tight game with them last week, so for us, it’s really just to make sure that we are focused on what we are doing, not as much about them.”

The Lions look to bounce back at home next Friday, Jan. 31, at 7 p.m. to face Yale, and then play back-to-back in Levien Gymnasium against Brown on Saturday, Feb. 1, at 5 p.m. Both games will be broadcast on SNY.